Enemies of the american people 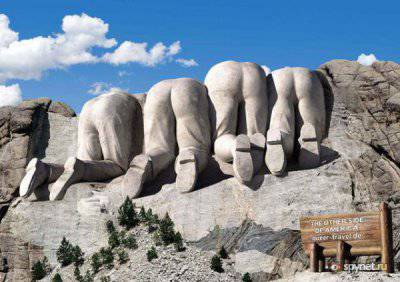 No, they are not terrorists. And not informers, publishers like Manning and Assange. And not even those who plunder the giant American budget, fighting "for democracy" in Iraq or Afghanistan. These are not those who sell heroin and cocaine. Not those who go to jail years on 20 or 40 for another theft in a supermarket. And not those who are closely watched by the watchful eye of the NSA.


The enemies of the American people are its presidents.

As Paul Craig Roberts writes in his column for Press TV, the warlike rulers of the United States have turned patriotism into a synonym for militarism.

According to the analyst, the US presidents turned out to be the “worst enemies” of the Americans. The reason for the negative attitude of Comrade Roberts to the American presidents was the frequent declaration of the so-called “war on terrorism” by them.

Here is what the analyst writes:

“In the 21st century, the worst enemy of the Americans is not Iran, not Russia, and not China. America’s worst enemy is its own presidents, who have repeatedly stated that the organized “war on terrorism” gives them the right not to take into account civil liberties guaranteed to every citizen by the American Constitution. ”

According to Comrade Roberts, the executive branch in the United States "took away civil liberties from US citizens", but "stocked up with a huge amount of ammunition."

The analyst notes that the 2.717 Department of Homeland Security purchases minded armored personnel carriers is a sign of how the US executive is arming itself against its people.

Roberts recalls that the wars launched by the United States since the end of World War II were fought abroad and had nothing to do with "protecting the US population from external threats." The analyst also points out that the main victims of the war are civilians.

The angry lines of Comrade Roberts were commented by the readers of Press TV.

Reader mylomorph believes that patriotism is what gives peace and justice to all.

He answers Johnwho is convinced that the so-called patriotism advocated by the US government is “a scam for collecting cannon fodder for a banker war.” The reader points to the fact that among the US military there are “many suicides”. The commentator sees the cause of suicides in the fact that the truth is revealed in the battle before the American soldiers. They understand that the US government has taught them to “believe lies”. And as a result, many can no longer live with a lie - and die.

Someone m with sad irony, reports that Americans in their thoughts do not equate patriotism with militarism. The problem is that “most people” do not think at all, he writes. This commentator ends his message with the following words: “I apologize to the people of the world who are now suffering from my government.”

Reader jen states that the "brains" of Americans are spoiled by Hollywood movies, TV shows and games.

There are no comments in which someone would at least stand up for a democratic America that saves the whole world from itself.

Observed and translated by Oleg Chuvakin
- especially for topwar.ru
Ctrl Enter
Noticed oshЫbku Highlight text and press. Ctrl + Enter
We are
Results of the week. “And this gentleman is a member of the bazaar society, he sells souvenirs, you see, who will cheat”Geopolitical mosaic: Guantanamo workers will not be able to enter Russia, and Paul Craig Roberts called the United States "puppet state"
Military Reviewin Yandex News
Military Reviewin Google News
45 comments
Information
Dear reader, to leave comments on the publication, you must sign in.