21 May 2014
201
Western newspapers write that Russia, which the US and the EU “isolate,” is counting on cooperation with China, which includes not only possible gas supplies, but also a strategic alliance of the two powers, aimed at weakening the US global position. As for the joint statements of Russia and China, they deal with “comprehensive partnership”, “trusting dialogue”, “good-neighborliness” and “friendship”. 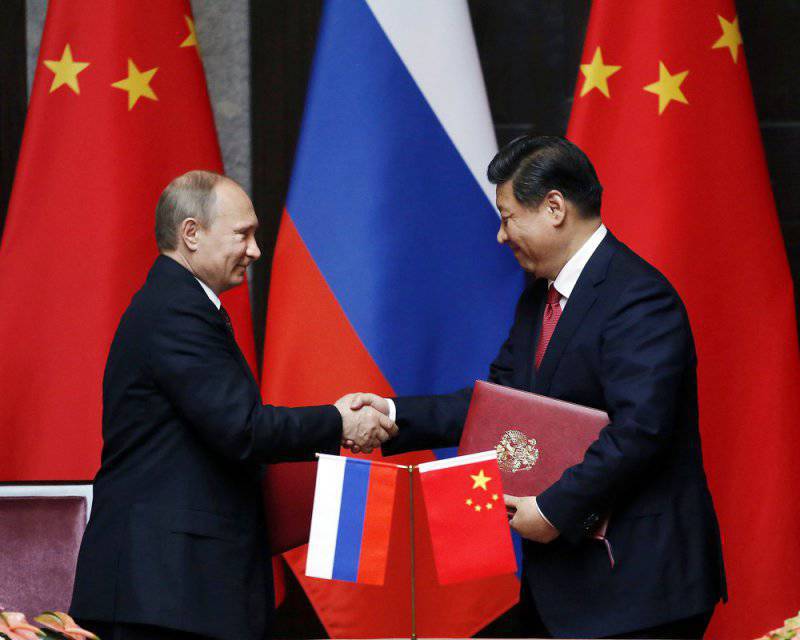 On the the site of the President of Russia The Shanghai Joint Statement of the Russian Federation and the People’s Republic of China on the New Stage of Comprehensive Partnership and Strategic Interaction Relationship of 20 was published in May.

In this document, the Russian Federation and the People's Republic of China announced a new phase of "comprehensive partnership and strategic interaction." Russia and China intend to “maintain and deepen the top-level and high-level strategic trusting dialogue, increase the effectiveness of existing and, if necessary, create new mechanisms for bilateral intergovernmental, inter-parliamentary, inter-agency, interregional cooperation, and ensure increasing returns from practical development in all areas humanitarian and social line, to strengthen the close coordination of actions in the foreign policy sphere ”.

One of the stated goals of the two states is to strengthen positions and influence in the international arena "in the interests of becoming a more just and rational world order."

At the same time, the parties “support the central role of the UN in protecting world peace, in promoting universal development and international cooperation, and unanimously believe that strengthening the key role of the UN in international affairs and its Security Council as the body responsible for maintaining international peace and security , corresponds to the common interests of the world community. ”

The Russian Federation and the People's Republic of China intend to speak out “against any attempts and methods of interference in internal affairs, for firm observance of the fundamental provisions of international law enshrined in the UN Charter, unconditional respect for the partner's right to independently choose the path of development, preserve and defend their own culturalhistorical, moral and moral values ​​”.

Among the economic steps, the parties outlined the very measures that are feared in Washington, namely, “close cooperation in the financial sphere”, including “an increase in the volume of direct payments in national currencies”.

The parties also agreed to “strengthen the comprehensive Russian-Chinese energy partnership, promote further deepening of comprehensive cooperation in the oil field, the earliest commencement of deliveries of Russian natural gas to China, expansion of cooperation in the coal sector, including through the development of fields in Russia and the development of transport infrastructure, actively to work out projects for the construction of new power generation facilities in Russia to increase electricity exports to China. ”

Beijing and Moscow, as follows from the document, want to "deepen ties in the field of science and technology, primarily through joint promising developments involving an equal financial and scientific and technical contribution, a full innovation cycle, reliable protection of intellectual property rights."

“Russia and China are calling for the de-escalation of the conflict in this country, for the exercise of restraint, for the search for peaceful, political solutions to the existing problems. The parties call on all regions and socio-political groups of Ukraine to enter into a broad national dialogue, jointly develop a concept for the further constitutional development of the state, providing for full compliance with the universally recognized rights and freedoms of citizens. ”

China and Russia view the G-20 (“G-20”) as the main forum for international economic cooperation. Russia and the PRC intend to "make active efforts to strengthen this association and increase the effectiveness of its activities, consistently implement the decisions of the St. Petersburg Summit."

The parties also believe that "the key task at the present stage is the deployment of multilateral cooperation of the BRICS member states and ensuring their important role in the mechanisms of global economic governance."

Moscow and Beijing agreed that “the planned establishment of the Eurasian Economic Union from 1 in January 2015 will contribute to the strengthening of stability in the region and the further deepening of mutually beneficial bilateral cooperation”.

There is also information about the military exercises of Russia and China, scheduled for 2015 year. Xi Jinping and Vladimir Putin decided to organize next year military exercises dedicated to the 70 anniversary of the Victory in the Great Patriotic War.

Director of the World Trade Analysis Center weapons Igor Korotchenko, whose words leads RIA News"He believes that these military exercises are designed to make the United States "play by the rules of the civilized countries of the world."

“Given the current geopolitical situation in the world, Russia and China are becoming strategic partners, and their interaction will affect not only the economic, but also the military sphere. In this regard, conducting joint military exercises is an extremely important factor, which shows our closeness on key military and political problems, ”said Comrade Korotchenko.

According to him, the participation of the People's Republic of China in the exercises shows that Russia and China have common goals, and the two countries from a common standpoint assess a lot of what is happening in the world.

What does America think about this?

And she is still silent. And more than that - refuses to talk. Usually the talkative D. Psaki did not comment on either the economic agreements of Moscow and Beijing, or the strategic statements of the two states.

As transmits RIA News", State Department spokeswoman Jen Psaki declined to comment on the Russian-Chinese agreement in the economic sphere and the joint exercises of the two countries during a briefing in Washington.

“We think that Russia should seek good relations with all its neighbors,” said Psaki. And she added that she would not make assumptions about joint exercises of the Russian Federation and the People's Republic of China.

As for the issue of gas supply to the Middle Kingdom that concerns many analysts, it has not yet been resolved. Meanwhile, gas is the main goal of V. Putin’s trip to China.

The media quoted the presidential spokesman Dmitry Peskov as saying that Moscow and Beijing had made "substantial progress" on the issue of exporting gas to China, but had not yet agreed on a price. “Substantial progress has been made, there is still a flaw in price,” - these are Peskov's words.

The estimated gas price for China ranges from 350 to 400 dollars per thousand cubic meters. The fact that she was not agreed upon at the start of negotiations is a bad sign, says Alexey Grivach, deputy head of the Energy Security Fund. “The probability that the contract will not be signed is quite high. The head of Gazprom, Alexey Miller, has been there for two days. And before that, a negotiator from China came to Moscow. These contacts last days go almost around the clock ", - quotes him "BBC".

At the same time, many experts still believe that against the background of strained Russian relations with the United States and Europe, the Kremlin may make concessions on the issue of energy prices. In this case, the contract can be signed today.

It can also be assumed that the parties will come to a gas agreement by the beginning of the economic forum in St. Petersburg.

One thing is clear here. We already wrote that against the background of tensions between Western countries and Russia because of the Ukrainian crisis, China will seek to bargain for itself the maximum discount on gas. And yesterday's deadlock in the negotiations is a manifestation of the most ordinary Chinese intractability in the matter of price.

Apparently, such intractability is intended to facilitate, as stated in the “Joint Statement”, “the earliest possible start of Russian natural gas supplies”. For the price that will suit the Middle Kingdom. And, perhaps, will anger Europe ...

Observed and commented on Oleg Chuvakin
- especially for topwar.ru
Ctrl Enter
Noticed oshЫbku Highlight text and press. Ctrl + Enter
We are
Artillery of the Korean People’s Army. Part of 3. Reactive systemsStrangulation: the context, conduct and consequences of the American naval blockade of China
Military Reviewin Yandex News
Military Reviewin Google News
201 comment
Information
Dear reader, to leave comments on the publication, you must sign in.