Igor Strelkov: the enemy began to shoot down the city center 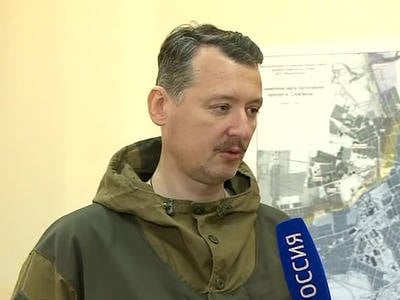 The situation under the Slavic continues to steadily deteriorate.


In the morning, the dill began shelling the southern outskirts first - in 4.40 they opened fire with howitzers. In 4.50, our “nona” began to respond. As a result of the duel, the 1 SAU was hit by the roof of the shelter, when we departed (ukry “escorted” the equipment with fire and in the city) three soldiers were slightly injured by shrapnel (remained in the ranks).

Happy fired from mortars (20 min) post on the turn to the Red Estuary. Unsuccessful.

Up until about the 15 hours there was a lull.

Then ukry climbed (like an attack) between Semenovka and Vysokoivanovka - before 30 people, with the support of the BTR, began to fire at a checkpoint in the area and move forward. From afar, they were supported by 1 BMP fire. The attack was repulsed, the armored vehicle of the ukrov was damaged and, smoking, crawled back along the dam to the north. According to local residents, he did not crawl away - he was burned to the ground (but already outside our zone of visibility). Ukrov has at least a few wounded. We have a bullet injured in the arm of one fighter.

As soon as it got dark, shelling of Semenovka began. First, it was handled by the BMP from the checkpoint on Krasny Liman, then by the howitzer. Of course, they did not make it to the checkpoint, but it turned out to be homely. One apartment building received several direct hits with 30-mm projectiles and burned out. The family was left homeless. Thank God no one was hurt. Actually, the disturbing shelling of Semenovka continues even now - on a shell in half an hour.


At 23, ukry clocks began to shoot down the center of the city - so far only with blanks. Three shells hit in the Executive Committee area. One of the blanks stuck in the balcony of a residential building. A kind of "hint" for the civilian population, which still can not believe that the enemy will smash the densely populated urban areas. I hope the hint will be understood, but despite my repeated statements, people do not want to leave Slavyansk, moreover - there are a lot of old people and children here.

Another column with artillery crawled over to Karachun and (presumably) with two heavy rocket launchers (heavily sheathed and very heavily guarded). Judging by the description given by witnesses far from military affairs, they brought something similar to the MLRS “Smerch”. I don’t understand, really, - why the hell is so close to such a long-range and expensive vehicle to carry? Therefore, not sure. But after all, probably, they are not going to limit themselves to storming one Slavyansk ... Again, this is ukry ... they have their own logic, which is inaccessible to Katsaps.

And so, on the whole, about 40 machines crawled to Karachun today. Just about one for each of my fresh volunteers who came today. Well, to other places by order of armor and any other technology has come.

The population gradually begins to come to sad thoughts. In the fact that they are completely “thrown” in GDP - so far no one really believes. But the fact that in order for Russia to intervene — their homes, gardens and kitchen gardens will have to be turned into ruins and ashes — many already believe in this. I will not say that this prospect greatly pleases people. Rather the opposite. Nevertheless, I have in my reserve several hundred local volunteers who are not yet ready to fully get on line (work, etc.), but who are ready to come as soon as the attack begins. No one is going to run.
Ctrl Enter
Noticed oshЫbku Highlight text and press. Ctrl + Enter
We are
Reports from the militia of New Russia for 4-5 of October 2014 of the yearReports from the militia of New Russia for 13-14 September 2014 of the year
Military Reviewin Yandex News
Military Reviewin Google News
58 comments
Information
Dear reader, to leave comments on the publication, you must sign in.