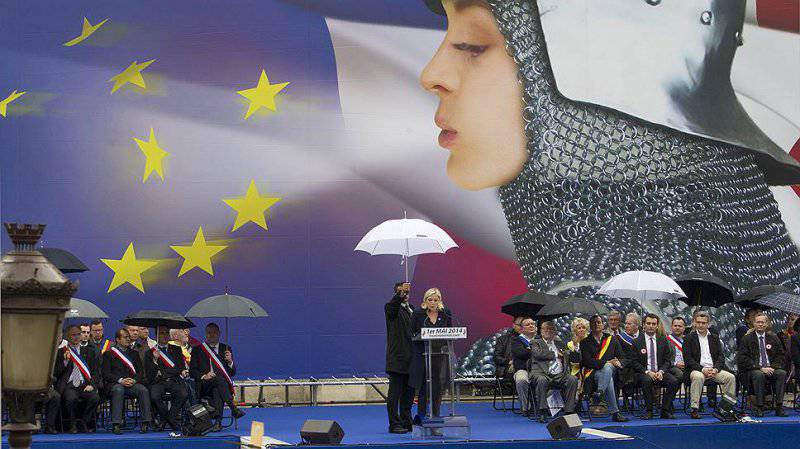 This week in the EU countries there will be elections to the European Parliament, in which many predict the success of European skeptics representing extreme right movements. Taking into account the fact that their leaders have repeatedly spoken in support of the Russian Federation, a number of Western experts predict that in the triumph of the far-right they might be interested in Moscow. Vladimir Chizhov, the Permanent Representative of the Russian Federation to the EU, assured the newspaper Kommersant that “the accusations against Russia of political commitment have no basis”.

Deputies from far-right parties - from regionalists from the Italian “League of the North” to the Hungarian ultra-right from “Jobbik” - now occupy 50 from 766 seats in the European Parliament, and the least radical of them even formed a separate faction - “Europe for Freedom and Democracy” ( EFD). However, this time far more voters are ready to vote for the extreme right than in the last 2009 elections of the year: in some countries this figure reaches 25%. “The same scenario is played out all over the Old Continent: anti-European nationalist or xenophobic parties charm voters who have lost faith in Europe to defend them,” says the French liberal newspaper Le Monde.

Some Western experts are already concluding that in the case of the triumph of the Euro-skeptics, the new composition of the European Parliament may take a more benevolent position towards Russia. Moreover, the extreme right can get the support of leftists who traditionally sympathize with Moscow.

The leaders and members of the leadership of the parties of the right-wing spectrum have indeed repeatedly supported the policies of Moscow in general and in Ukraine in particular. "We believe that Vladimir Putin has restored the position of Russia both in the economy and in geopolitics, and Russia enjoys great respect in the world," said Emerik Shoprad, adviser to the head of the National Front, who heads the party list for elections in the Paris region. A number of deputies from far-right parties took part in monitoring the referendum in the Crimea on March 16.

However, in Moscow they deny that they are going to bet on the far right in the European Parliament. "We are in dialogue with all the political forces represented in the European Parliament," explained Vladimir Chizhov, the Permanent Representative of the Russian Federation to the EU. "The charges against Russia of political commitment have no basis and play into the hands of only those who are not interested in developing cooperation between Russia and the EU. " According to the Permanent Representative, within the framework of the mechanism of inter-parliamentary cooperation, dialogue between the various factions of the State Duma and the European Parliament groups is conducted both along the political line and within the framework of separate sectoral committees.

In addition, the chances of the extreme right to create a right-wing faction in the European Parliament are small: it is not easy for parties with extreme and populist positions for national or even regional interests to agree among themselves. Their political group, if it appears (for this it is necessary to unite at least 25 deputies from seven EU countries), it is unlikely to be sustainable.

In addition, Euroskepticism remains the driving force behind the sympathies of right-wing parties towards Russia - the approval of Moscow’s criticism of the EU (and the US) and Russia's advocacy of conservative values. A spokesman for the nationalist British National Party (BNP), Simon Derby, said: "We want to be friends of Moscow, but we are not a pro-Russian party."

Ctrl Enter
Noticed oshЫbku Highlight text and press. Ctrl + Enter
We are
Interview of V. Putin to Channel One and the Associated Press AgencyWhat you didn't want to know about England
Military Reviewin Yandex News
Military Reviewin Google News
19 comments
Information
Dear reader, to leave comments on the publication, you must sign in.