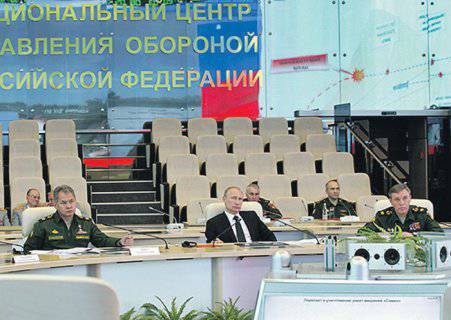 The Supreme Commander of the Armed Forces of the Russian Federation, Vladimir Putin, held a special event last week in importance. Under his leadership, a training of the highest military command was held at the National Center for Defense Management of the Russian Federation (NTSUO), at which issues of the practical use of formations and military units of missile forces and artillery aviation and air defense to destroy ground groups and repel an enemy missile and air strike, as well as launch a retaliatory counter-strike by Russian nuclear deterrence forces (SNF). In fact, Russia's readiness for a global military clash was checked.

The nature of all tasks performed was defined by the concept of "massed". It reflected both the scale of the offensive actions of the conditional enemy, and the response measures of the Russian Armed Forces. The main goal of the training was: to test the control system of the military structures of the country, the reliability of passing training orders and signals from the National Center of Control and Administration to command posts of formations and military units in the Strategic Missile Forces, Aerospace Defense Forces and Long-Range Aviation. The event attracted strategic bombers, submarine missile carriers of the Pacific and Northern fleets, mobile ground-based missile systems of strategic purpose, forces and means that solve the tasks of aerospace defense, formation of missile forces and artillery of the Southern and Central military districts. It was a day of really massive rocket launches on the territory of the Russian Federation and ... near abroad.

The most powerful and high-precision views weapons, in fact, at the same time applied at several landfills at once. The troops of the Southern Military District and Central Military District, reflecting the invasion of numerous ground forces of the conditional enemy, conducted firing with multiple launch rocket systems (MLRS) "Uragan" and "Grad". The gunners destroyed the car columns, command posts and positions of conditional enemy units at the Chebarkul training ground near Chelyabinsk. To assess the effectiveness of hitting targets, unmanned aerial vehicles of domestic production were used, the video signal from which was transmitted in real time to the NTSUO. And at the Kapustin Yar test site in the Astrakhan region, the most long-range Russian MLRS Smerch fired. In addition, there were successful launches of the Iskander-M operational tactical complexes capable of carrying nuclear warheads.

The grouping of air defense and aviation of the Southern Military District at the Ashuluk training ground repulsed a massive missile strike from a conditional enemy aircraft. The combat crews of the C-300, Buk-М1 and Pantsir-S anti-aircraft complexes covered the conditional area from air strikes, having successfully repulsed a training air strike. As the commander of the Southern Military District troops reported to the president, they succeeded in destroying all the target missiles that imitated targets.

A successful interception of a short-range antimissile ballistic target was carried out at the Priozersk (Kazakhstan) training ground. By combining the missile defense of the command of the air defense and missile defense of the aerospace defense forces, the tasks of repelling again a massive nuclear missile strike were successfully accomplished. The combat crews of the Armed Forces of the East Kazakhstan region discovered and executed the tracking of ballistic targets with a practical launch of antimissiles from the Amur complex.

As part of the training missile submarine strategic cruiser North fleet Tula and the Pacific Fleet Podolsk launched ballistic missiles from the Barents and Okhotsk Seas. As noted in the Ministry of Defense, launches of sea-based missiles were made from underwater position. "According to telemetry and observation posts, the warheads of the missiles arrived at the appointed time at the Chizh training grounds in northern Russia and the Kura in north-eastern Russia," said an official spokesman for the military. Well, a warhead of the RS-12M Topol intercontinental ballistic missile was delivered to Kura (Kamchatka Peninsula), the launch of which was carried out by the Strategic Missile Forces combat calculations from the Plesetsk Cosmodrome.

It remains to add that, on ground targets at a military range of the Western Military District, a strategic missile carrier Tu-95MS launched cruise missiles. These launches were carried out by the so-called revolving method, when in a row six cruise missiles hit ground targets simulating key objects of the military infrastructure of a conditional enemy.

“Strategic nuclear forces have demonstrated the ability to launch intercontinental ballistic missiles as soon as possible. This testifies to the high technical readiness of the entire group of strategic nuclear forces, ”Defense Minister Sergei Shoigu reported to the president at the end of the training session. And he also said that before 2021, the number of carriers of high-precision weapons is planned to be quadrupled.

The minister considered it necessary to emphasize the planned nature of the training. She was scheduled back in November last year. Nevertheless, the current situation in the world shows that such a large-scale event to test the SNF and the entire arsenal of Russian missile weapons turned out to be very useful. It was not by chance that at the meeting in the Kremlin on the same day with the presidents of Armenia, Belarus, Kyrgyzstan and Tajikistan, Vladimir Putin stressed: “We all had the opportunity to see high readiness and coherence of the actions of the group of strategic offensive and defensive forces of the country ... She, being a reliable guarantor of sovereignty and territorial integrity of Russia, plays a significant role in ensuring global and regional security ".

The heads of all four of these states that are members of the Collective Security Treaty Organization were also present at the National Defense Management Center of the Russian Federation in training. The President of Belarus, Alexander Lukashenko, stated after her that “the Armed Forces could not afford such training even in the times of the Soviet Union.” Than once again emphasized the immeasurably increased capabilities of Russia and its allies for the prevention and, if necessary, guaranteed retribution for attempting armed aggression against the CSTO countries.

Ctrl Enter
Noticed oshЫbku Highlight text and press. Ctrl + Enter
We are
The first steps towards the revival of the Borisoglebsky Higher Military Aviation School of PilotsSudden verification of the combat readiness of the Northern Fleet, ZVO and Airborne Troops
Military Reviewin Yandex News
Military Reviewin Google News
37 comments
Information
Dear reader, to leave comments on the publication, you must sign in.