In place of M16, which is not very suitable for urban combat conditions, a company from Israel IMI TAAS (Israel Military Industries) began developing in 90's weapons A new generation, using the now fashionable “bullpup” scheme. This is such a layout of small arms, where the magazine, the bolt and the firing mechanism are located behind the pistol grip with the trigger (usually inside the device). The big advantage of this scheme is that with certain dimensions of the weapon it is possible to increase the length of the barrel, and this means an increase in firing accuracy. Or, if it is necessary to maintain a given barrel length, it is possible to reduce the length of the rifle, thereby improving its weight, size and ergonomic performance. The disadvantages of this “bulpap” scheme are, as a rule, the location of the window for ejection of the sleeves, which is located close to the butt of the weapon (when firing from the left shoulder, the sleeves fly in front of the fighter) and heavy descent (through the additional element between the trigger and the trigger mechanism).

The new machine is not a processing or modernization of other weapons, but was created, as they say, from scratch.

In 1998, the results of the development of IMI TAAS, namely the new rifle, dubbed Tavor Assault Rifle for the 21st Century (TAR-21 -: “Tavor” twenty-first century assault rifle), were presented to the public. More precisely, a whole series of rifles was presented, ranging from the TAR-21 military model and its STAR-21 sniper performance with the barrel extended to 460 mm, the telescopic sight and the folding bipod to the compact MTAR-21 version with the 250-mm barrel for security services. Absolutely all the models of new weapons are designed for use of standard shops from M16 and for firing conventional NATO ammunition caliber 5,56 mm. 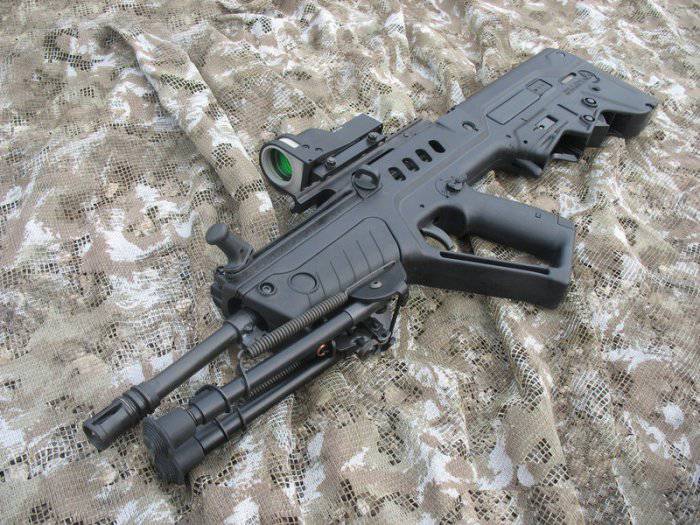 The body of the new rifle is made of durable polymeric materials and reinforced with inserts of light and steel alloys. The weapon developers abandoned the standard “mechanical” sight, equipping the rifle with an external sight of the collimator type with a built-in laser target designator. In order not to tire the soldiers with constant switching on and off, the sight turns on automatically when the shutter is twitched and turns off when the weapon needs to be unloaded. Now it is completed with a cheaper sight without a laser pointer.

Military experts attribute the Israeli new-generation assault rifle to an almost ideal weapon for fighting in the city - it came out easy and at the same time a quick-fire, as well as convenient when shooting offhand. The disadvantage is the high cost compared to the conventional M16. TAR-21 costs 10 times, or $ 1000.

In addition to Israel, TAR-21 are armed with special forces of the army of India and Georgia, Azerbaijan, and Brazil releases them under license.