Russia will sell weapons as it can 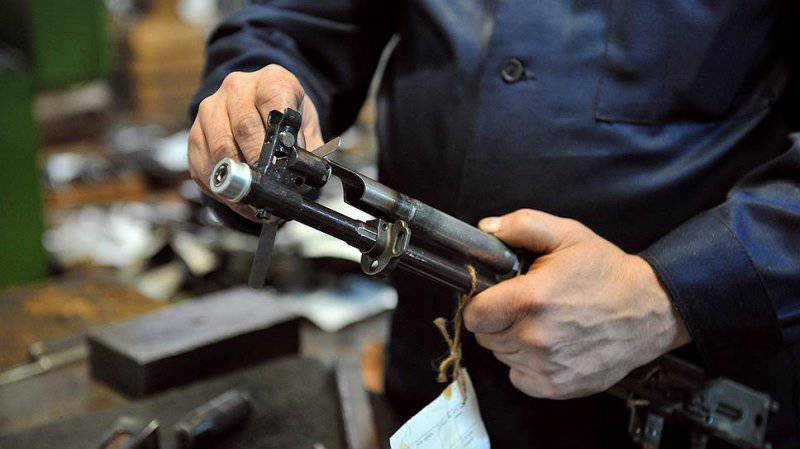 Russia in the near future will not sign an international trade agreement weapons, although it may take effect this summer. About this "b" told two sources in the Russian government. According to them, the agreement approved by the UN General Assembly last year is “incomplete” and “inconsequential.” Experts consider such an opinion to be justified, but they warn that by refusing to sign the contract, Moscow may suffer image and financial losses.

According to two high-ranking sources of "Kommersant" in the government of the Russian Federation, Moscow has decided not to join the international arms trade treaty (ATT). “The principal decision on this matter has already been taken, the position has been formed: we will not sign in the foreseeable future,” one of the Kommersant’s sources explained. "This issue was discussed at several interdepartmental meetings during the year, including the Security Council of the Russian Federation, and as a result it was decided not to join the agreement," the second informed source told Kommersant.

The ATT, the first legally binding instrument establishing the rules of the arms market, was adopted by the UN General Assembly last year (see Kommersant on April 4 of 2013). Only North Korea, Iran and Syria opposed the adoption of this document. Russia, which ranks second (after the US) in arms exports, was among the 23 abstaining countries. The Foreign Ministry of the Russian Federation told Kommersant at that time that Moscow would determine its position after “careful study of the document with the participation of specialists from different departments.”

The treaty will enter into force when ratified by 50 states. 32 countries have already done this (Japan’s 32 may become 10 in May). Of these, five countries are among the ten largest exporters of weapons according to the Stockholm Peace Research Institute - SIPRI (Germany, France, Great Britain, Spain and Italy).

It is expected that the contract will come into force this summer. It has not yet been ratified by all EU countries, and meanwhile the European Parliament recently recommended that all member states of the community accede to the document. In Brussels, it is believed that this is a matter of a few weeks. The EU legislature is convinced: "thanks to the ATT, weapons should cease to fall into the hands of terrorists and into unstable regions."

In Moscow, however, after a “thorough study,” they came to less rosy conclusions. The fact is that Russia initially demanded to toughen the provision on re-export of weapons, as well as to include in the treaty text a clause banning arms supplies to "unauthorized non-state actors", but its proposals did not pass.

As a result, the document restricts the legal sale of weapons to problem regimes (for example, violating human rights), but does not put barriers to arming the opposition fighting against the governments of their countries. According to the Kommersant interlocutors, experts from the relevant Russian departments considered that the agreement turned out to be “incomplete” and “inconsequential”.

Experts agree with the conclusions of the officials. “The contract turned out to be weak. In fact, this is a set of wishes that do not bind anyone to anything,” PIR Center expert Vadim Kozyulin explained to Kommersant. legislation on this issue. " According to the expert, the effect of the ATT will be manifested mainly in the field of transparency of the world arms trade.

Countries that accede to the treaty will be required to report annually on the supply of eight categories of weapons. MTTO regulates trade tanks, armored personnel carriers, artillery systems, fighters, helicopters, missiles and missile launchers, as well as small arms and light weapons. Until recently, less than 40% of states submitted information to the UN voluntary register of conventional weapons. The annual volume of world arms trade is estimated at $ 70 billion.

Meanwhile, according to Vadim Kozyulin, by refusing to sign the contract, Moscow may suffer image losses. “When the ATT comes into force and its secretariat starts publishing annual reports, Russia will most likely become a target for criticism because it doesn’t adhere to the agreement, does not provide data, but supplies weapons to countries like Syria and Iran,” explains the expert.

According to him, the matter may, however, not be limited to the image. The ATT has a clause providing for the possibility of making tougher amendments after six years, which can both deprive Russian producers of certain arms markets and limit the supply of arms by the parties to the treaty to Russia. "There is a risk that the ATT will eventually become an analogue of COCOM," the expert warns. The Export Control Coordinating Committee (COCOM) was established by Western countries in 1949 to limit the supply of "strategic" goods and technologies to the USSR and the countries supported by it (it was abolished in 1994).

However, one of the Kommersant interlocutors in the government of the Russian Federation does not exclude that Russia, in the event that the amendments “strongly affect” its interests, will nevertheless join the treaty. "But this is clearly not a question of the next few years," he says. And Vadim Kozyulin recalls that in addition to Russia, a number of key arms manufacturers (including China) and importers (including India and Saudi Arabia) have not signed the WTO. The United States signed the document last fall, but they are not in a hurry to ratify it.