Nothing personal. Why Kolomoisky war with Russia

21 May 2014
29
Surname Kolomoisky during discussions of the Ukrainian crisis sounds almost more often than the names of politicians who provoked this crisis. It seems surprising and unbelievable that the representative of the business during the distemper did not run away from the republic, but on the contrary, returned to it. And not just returned, but rushed into the thick of things: he accepted the offer to become the head of the regional state administration (governor), forms battalions, with the help of which he holds power and fights with Donetsk and Lugansk people's republics, sponsors the so-called National Guard and pays cash bonuses "for Moskal." One wonders the question: what rules this person? The answer is not too complicated. I. Kolomoisky is a long-standing, consistent and staunch opponent of integration projects in the post-Soviet space.


Here he has love with interest, here he has a rookery

In the distant 1994 year, the presidents of Ukraine and the Republic of Tatarstan signed an agreement on the establishment of the company Ukrtatnafta. Ukraine’s contribution to the company was the Kremenchug Oil Refinery, the largest and most modern of the republic’s refineries. In 2005, Ukrtatnafta took the eighth position among 500 companies in terms of assets, net income and net income (assets in 2005 prices of the year - $ 523 million, net profit - $ 21 million). This is very good, considering that at that time the first ten in such ratings was occupied by companies from the mining and metallurgical industry.

In other words, 10-year experience of Ukrtatnafta proved the prospects and the need to create similar forms of cooperation in other sectors of the economy.

The disadvantage of such companies is exactly one (recent история with “Uralkali” it only confirmed it): they are decidedly unprofitable for anti-state oligarchic capital.

As of 2007 year, the ownership scheme was as follows. 43% of the shares were owned by the state-owned company Naftogaz of Ukraine, the government of Tatarstan owned 28,9%, and another 8,6% of the company Tatneft. Offshore companies SeaGroup International PLC and AmRuz Trading AG owned 10 and 8,3% shares, respectively. Shares of offshore companies, as well as government shares of the Republic of Tatarstan, were controlled by Tatneft (government shares were transferred to it in trust), thus controlling the company and management.

In 2007, everything changed. 1,2% of the shares of Ukrtatnafta was owned by Korsan LLC - the company of G. Korban, junior partner of I. Kolomoisky. It was G. Korban, one of the most famous Ukrainian raiders, who implemented the capture scheme of Ukrtatnafta. As a result, representatives of Tatarstan initially lost operational control (management replacement), and after that their share in the company.

There is no special need to describe in detail all the vicissitudes of the capture of the company, it is worthwhile to dwell only on the most important points for us.

1. The key to seizing steel offshore companies. The Ukrainian side has challenged the ownership of non-resident companies on the shares of Ukrtatnafta (according to some sources, their ultimate beneficiary was the trade representative of Tatarstan in Ukraine Vakhitov and / or his entourage). In the future, these shares became the property of Korsan LLC - now the company owns 47% of Ukrtatnafta shares. This once again confirms: property registered in “tropical” jurisdictions will either be taken away or will become a lever of pressure on the owner and forcing him to take anti-state actions. And all the losses will eventually become a headache for the state.

2. However, the seizure could not take place only at the request of Kolomoisky himself. It became possible only in a situation when a group of politicians hostile to Eurasian integration came to power in Ukraine. It was the union of politics and capital that implemented this scheme to their mutual satisfaction. And now is the time to recollect the precedent of Uralkali, when exactly the allied position of the Belarusian side allowed to stop the privatization of profits - the favorite method of criminal enrichment of “effective managers”.

The Russian side tried to protest the seizure of the company, but the case has been hanging in international arbitration for several years now, and most likely, Russian participation in Ukrtatnafta has been lost forever.

However, the oil adventures of Kolomoisky did not end there.

After the seizure of Ukrtatnafta, Tatarstan stopped oil shipments to the Kremenchug refinery, leaving the plant without raw materials. Looking ahead, we note that since the force change of management, the company has not been able to provide the plant with a full load (although the new owners have shown a fair amount of resourcefulness in this). Now the plant receives oil Ukrainian production. In the past, the plant experimented with the supply of Azerbaijani and Kazakh raw materials. At the same time for the delivery of oil to the place of its processing it was necessary to use the Odessa-Brody pipeline. 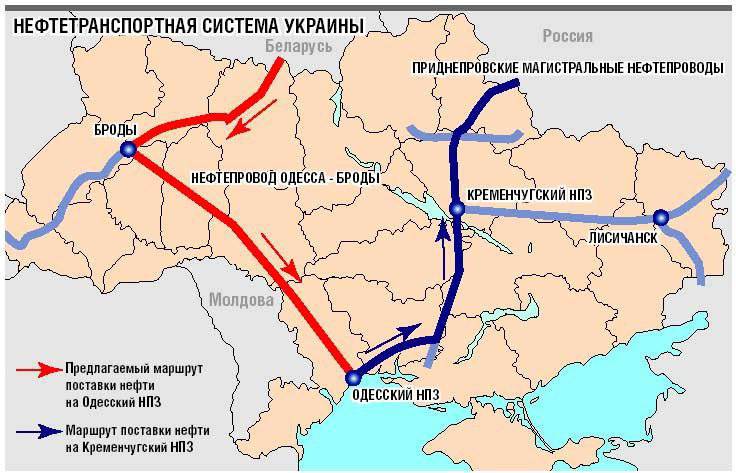 Earlier, Russia has repeatedly offered Ukraine to use the pipeline in the reverse mode to supply oil to the ports of the Mediterranean Sea. In 2004, the reverse even earned. However, after the first Maidan and the arrival of the government of Y. Tymoshenko, this had to be forgotten.

There were a lot of loud words, but the announced completion of the pipeline to the oil refinery in Plock, Poland, and its loading with Caspian oil was never realized. And after the seizure of the Kremenchug refinery, there could be no question of any reverse. The head of Ukrtransnaft (Ukraine’s operator of oil pipelines) A. Lazorko — a protégé of I. Kolomoisky — disconnected the Odessa refinery from the pipe, making it possible to use Odessa-Brody to supply raw materials to Kremenchug.

It is curious that the theme of the reverse surfaced once again in December 2013 of the year - thus it was planned to load the Odessa refinery, bought by S. Kurchenko from the Russian owners. However, the next Ukrainian coup in time buried this unfavorable idea to I. Kolomoisky.

And even that is not all.

In the spring of 2014, Ukrtransnafta began pumping process oil from oil pipelines. Oil was supplied to the Kremenchug refinery. As of May 14, 224 thousand tons of oil was pumped out of the system (with a total amount of 1,35 – 1,9 million tons).

Experts immediately pointed out the obvious risks of such a decision, the main one being the paralysis of the work of all the other refineries of the republic. If the process oil is completely pumped out of the system, then supplies to the Odessa and Lisichansk refineries will be impossible until it is returned to the system. But stop. Who owns these plants? Russian owners. So this is great!

As a result, there remains in the republic the only (for the time being) operating refinery, which will process all this oil. And he will receive not only a considerable profit (against the background of a quite possible energy blockade of Ukraine), but also a weighty trump card in the dialogue with both the government and business. Today is war, tomorrow is harvesting, and only Kolomoisky has fuel. What will he ask to help Ukraine minimize the consequences of the conflict with the Russian Federation, in which he himself has been embroiling her for so many years?

Once Russia successfully coped with the claims of its oligarchs on the privatization of profits and the nationalization of losses. Recurrences still happen, but they have ceased to be a system. Such talents, as we see, are found not only in Russia.

As long as I. Kolomoisky is related to the decision-making system in Ukraine, any cooperation project with the republic is under threat. Not because Kolomoisky is an enemy of Russia. And because the model of the state, which is being created in the Union republics, leaves no room for Kolomoisky and his ilk.