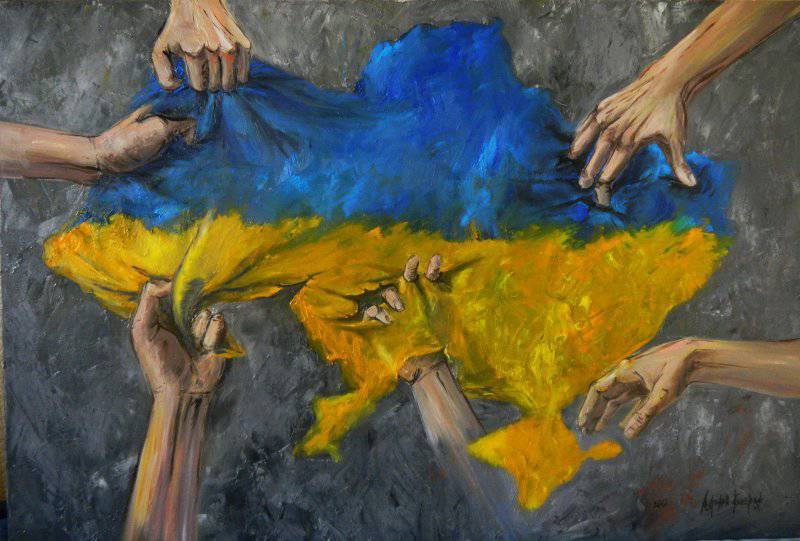 On the land, native and fraternal to us, the Russian people, of Ukraine, the most disgusting flowers blossomed and blossomed out like wild flowers - the flowers of the brown plague of the twentieth century, the flowers of Nazism.

It is not necessary for anyone in Russia, in Belarus, in Ukraine and in the other former republics of the USSR to explain what this abomination carries with it. The participants of the great struggle against this evil that came to our land 73 a year ago are still alive. At the cost of the incredible efforts of the entire Soviet people, at the cost of millions of human lives, at the cost of suffering and torment, our people overcame this monster.

The victorious countries created a joint legal body - the Nuremberg Tribunal, which gave an objective assessment of Nazism and paid tribute to their leaders. It seemed that the idea of ​​superiority of one nation over all others would never take possession of the sons of the human race. But a terrible thing happened. Our neighbor. Our brother Our one-faith relative made a fatal decision for himself. And from the ground, from the cradle of the Russian land, from Kiev region begins to spread its tentacles this terrible octopus.

Relying on the methods and methods developed and tested earlier, the ideologists of modern Nazism set a course for the triumph of the man-hating doctrine. They have raised to the rank of idols, damned by all the people of moral monsters who blessed the destruction of hundreds of thousands of Russians, Ukrainians, Belarusians, Poles and representatives of many other nations, just because they do not look like them, pray to other gods, speak other languages. They destroyed them only because people dared to have their own opinion, views, attitude to events. They destroyed them only because they were people.

And now, after 73 of the year, the grandchildren and great-grandchildren of these inhumans came to power again. Having overthrown the legitimate president, this otpye herself appointed herself to leading positions in Ukraine. Assistants and performers of all their plans were drawn by the Nazis, carefully nicked by the former leaders of Ukraine and those who sat next to us in the hall of Nuremberg. Despite the inertia and narrow-mindedness of ordinary Ukrainians, there were people in their society who dared to say no to Nazism!

And the result was not long in coming. A terrible result! The Nazis, led by Kolomoisky and his ilk, embodied a terrible plan - a plan that took place in the Nazi concentration camps and in the burned villages of Belarus and Poland. They burned their brothers alive in the House of Trade Unions in Odessa!

Ukraine, a healthy and normal part of it, was struck by inhuman, unjustified, unprovoked cruelty, turning into sadism. And many understood one, but very important truth - from such villains it is necessary to keep as far as possible. Behind its own state border. And preferably in close cooperation with our Homeland, with the Russian Federation.

The referendums in the Donetsk and Luhansk regions showed an unprecedented rush of the people to protect themselves and their loved ones from the impending disaster. They, like none of us, realized the horror of their position. And they decided to leave Ukraine.

But the Kiev junta, a bunch of unprincipled villains, does not intend to realize the right of the people to self-determination, provoked by a sense of self-preservation. To suppress the freedom-loving aspirations of South-Eastern Ukraine were thrown Tanks, Armored personnel carriers, planes and helicopters. The gangs formed outside the legal field, bearing a big name - "national guard", began to wage a systematic war with the civilian population of Donbass.

In cities and villages of the Donetsk and Lugansk regions, in their peaceful citizens, their children are beaten from heavy machine guns, fired from mortars and howitzers. Representatives of the Nazis carried out stripping and punitive operations. The death toll goes to hundreds. There are thousands of injured.

People who have devoted themselves to serving their homeland all their lives, in a flash were completely defenseless against the arbitrariness of the junta and their minions. In order to achieve their disgusting goals practiced intimidation and terror. For the demoralization of the population, fire from large-caliber guns and mortars in residential areas, which, as is known, has no military value, is used. All this can be described only by one, but a capacious concept - genocide.

At the same time, the unleashed harassment of Russia in all world mass media, as well as the imposition of sanctions against its citizens tell us only on the bottom - the evil born in Ukraine must be destroyed, and at the same time in the most decisive way.

To fulfill this high and responsible mission, which has fallen to our lot, we ask, no, we demand!

As from the head of our state, we demand that you take all comprehensive measures to form an international tribunal in Russia to prevent the spread of Nazi ideology with the participation of the countries of the former Soviet republics.

Instruct all services and bodies of the Russian Federation to keep records and record the statements and actions of the participants of the Nazi movement in Ukraine, as well as identify those who sympathize and help them, in order to prosecute them further for their actions both in the former Soviet republics and abroad.

To envisage at the legislative level the social protection of the families of the participants in such actions, and, if necessary, the appointment of a state pension for the loss of the breadwinner.

Citizens who took part in such operations equate to participants in the Great Patriotic War, with the provision of appropriate benefits and allowances.

To organize under the personal control of the governors of the subjects of the Russian Federation adjacent to Ukraine, special commissions whose duties would be to accept and accommodate refugees from Ukraine. The bodies of social protection of the population to impose the duty of providing arriving refugees with material resources.

The Armed Forces of the Russian Federation to ensure the transfer of the necessary weapons at the disposal of volunteers in the required quantity and the corresponding purpose.

The Main Intelligence Directorate of the General Staff of the Defense Ministry of the Russian Federation shall provide volunteer units with intelligence information on the deployment and movement of the enemy throughout the territory of Ukraine.

The Federal Penitentiary Service should prepare new special objects of adequate capacity to accommodate those convicted of Nazi acts.

The Ministry of Health of the Russian Federation to ensure the supply of medical equipment, as well as consumables and drugs for military field surgery in the required quantity and of proper quality.

Recommend the media to conduct a systematic outreach work among the Russian audience about the patriotic duty of our people to Ukraine.

To create intolerance in society towards xenophobia, racial discrimination, support and propaganda of Nazism. Cultures, seen in sympathy with the Nazis, subject to public scorn and ostracism. To withdraw from circulation and broadcast films and songs with their participation. Create a “Board of Shame” on the Internet, indicating the personalities and the offense committed by them.

The Ministry of Public Education to impose a duty to conduct educational and outreach work among Ukrainian citizens working in the territory of the Russian Federation.

Responsible for these activities should be personally appointed ministers and heads of services and departments.

In such a matter of paramount importance for our country, in no case can one rely on chance! Your active and direct participation is vital!

Immediately adopt all laws aimed at the unconditional and early victory over Nazism.

Create inter-factional groups to negotiate with foreign parliamentarians in order to provide them with full information on the actions of the Nazis, both during the Great Patriotic War and today's activities of their heirs in Ukraine.

To invite the leaders of foreign countries who are sympathetic to our struggle, as well as representatives of anti-fascist movements, to familiarize themselves with the available materials.

You, those who have been elected to the highest legislative bodies of the country, are clothed with the trust of millions of voters in Russia. So be today together with the people! Raise the flag of the fight against evil spirits! It is to you we delegate the right to lead this fight!

Dear citizens of Russia! Dear goodwill people! The enemy has come to our land! The enemy is treacherous, perfidious, bloodthirsty! He rose from the ashes of the previously burnt victims of Buchenwald and Majdanek, Auschwitz and Salaspils. He feeds on the ashes of Odessa and the blood of the Donetsk region. He is gaining strength. He collects new victims. And he will stop at nothing.

Created in the image and likeness of the shock groups of the SS, wearing their symbolism, professing their worldview, they are the embodiment of the most horrible and ugly parodies of people who have erected an absolute total contempt for the life of another, another person.

God’s right to self-defense calls us to stand up for our homeland! To protect our loved ones. To protect our memory. We are the descendants of millions killed, tortured in concentration camps, destitute and robbed, we have every right to do.

And no one ever dares us to indicate how we treat this mold, which imagines itself to be a teaching!

And may our slogan on our banner be the symbol of past times: “Our cause is right! The enemy will be defeated! Victory will be ours!"

Remember! Nobody can sit down! This applies to everyone! We offer all indifferent patriots of their homeland, Great Russia, to subscribe to this appeal.

We consider it possible to point out that every day, every hour, every minute of delay and indecision leads to ever new and new victims among our brothers. The lessons of Yugoslavia, Syria, Iraq, Libya are learned. There can be no other way.