Top of cynicism by the Brekhovna Rada 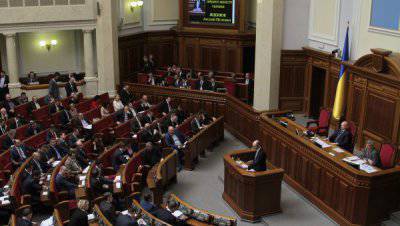 
"To de-escalate tensions in society, the Verkhovna Rada of Ukraine calls on all parties to the conflict to stretch their hands to each other, to abandon radical actions, hatred, to return together to work together to protect, develop and build a democratic, sovereign and united Ukraine in which they will live freely and together people of all nationalities, political convictions and religions. The Verkhovna Rada of Ukraine appeals to all citizens of the country to unite in order to preserve our common home, Ukraine, "says memorandum.

Saw out? Not really saw the light. Apparently, they looked at the calendar. And there - hoo th! - 20 May. Before the so-called election of nothing at all. And Slavyansk keeps everything. And Kramatorsk holds. And in Donetsk they do not want to go on strike at the behest of Akhmetov. But the army did not really want to fight, so it does not fight. And the National Guard under both the crowd of punishers capable of firing at unarmed ones remained. Yes, apparently, something must be done.

The Verkhovna Rada fully supports the Geneva agreements of the diplomats of the United States, the European Union, Russia and Ukraine of 17 on April 2014.

It’s like, Mikhalych ... Not just support, but already in full. Maybe we will also perform? And start with the Maidan and pravosekov? "Well, you, damn, give ...". I want to close my eyes and believe. But - does not work. Odessa residents and Mariupol militiamen stand before their eyes. Even before closed. And "Golden Eagles" in Kiev.

The Parliament of Ukraine also declared support for the activities of the All-Ukrainian Round Table of National Unity and supports the holding of presidential elections in Ukraine "as a pledge of peace and unity in society." Rada urged all state authorities in Ukraine to ensure free and safe will of the people in the elections of the President of Ukraine, and citizens of the country to stop actions aimed at obstructing the will of other citizens.

The holding of the presidential elections in Ukraine Poroshenko as a pledge of peace and unity in society is on the topic “who do you want to ...” in the sense of, deceive. So?

Called, called to discuss - did not go. And now, when really burned, we decided to come. Well, it is logical. Is it too late? There, in the southeast, they are already collecting their power, which is clearly not Poroshenko’s.

Verkhovna Rada Condemns Illegal Use weapons and violence that led to mass killings of people and other crimes against humanity.

This is generally a masterpiece. That is, the ministers Nalyvaychenko and Avakov, appointed by the Rada, are now condemned by the same Rada? What do we merge? Executioners in the flow? Not yet come in handy. Condemn slightly. And this, and. President, too, will be convicted. He was dug, they were hollowed, calm down, enough of the weapon to rattle, enough of people to destroy. And he in any. Condemn, of course condemn. No more. More is to state that the hands themselves have blood in their elbows.

Ctrl Enter
Noticed oshЫbku Highlight text and press. Ctrl + Enter
We are
Day of the Airborne Forces in DonetskIn Donetsk, a monument to Uncle Vasya was installed, and the ukrokrateli “congratulated” the Donbass on the Day of Metallurg
Military Reviewin Yandex News
Military Reviewin Google News
79 comments
Information
Dear reader, to leave comments on the publication, you must sign in.