How risky is it to rely on Russian spacecraft? ("MSNBC", USA) 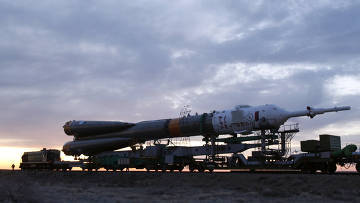 After the life of the shuttles, Baikonur will be the only gateway to space for NASA.


The latest launch of the Soyuz spacecraft underlines the risks that the United States space program will now be associated with: dependence for years ahead from another country on the delivery of all NASA astronauts to outer space. None of the space systems can be on 100 percent reliable. Therefore, the question arises - how risky is the chosen strategy?

The main lesson of the global partnership that enabled the construction of the International Space Station is obvious. We realized that complex independent technologies for major space objects prove their amazing operational reliability in the face of unavoidable unforeseen situations. Providing oxygen, going into open space or transporting the crew - in all these cases, the availability of redundant backup options can be crucial.

However, these lessons are now being ignored. The crew members of the space station, including the Russian Fedor Yurchikhin, as well as NASA astronauts Doug Wheelock and Shannon Walker, who set off for the orbital station on Tuesday, will no longer fly into space and return to Earth on departing soon to well-deserved rest space shuttles. The univariate method and algorithm of the critical path is now unexpectedly proposed to be considered “quite good”.

Neither of which impeccability we are no longer talking. What are the main threats - known and perceived - that may be associated with the use of "Soyuz", which became the only option for the delivery of crews to the space station?

1. Price games. It will be difficult for Russians to resist the temptation to use their monopoly position in order to ask for too high a price, and the latest increase in payment for a spacecraft is highly suspicious.

However, both sides will negotiate hard, and the Americans have important trumps in their hands. Most of the electrical equipment, as well as the space-to-Earth communication channels on the ISS, belong to the United States. Russian cosmonaut and space station veteran Mikhail Tyurin last year complained that when using only Russian ground stations, only one large file with images could be transmitted to Earth for a session, and this level is lower than what was at the disposal of the American (and Soviet) stations. ) space stations in 1970 and 1980 years. Russian satellites of radio relay communications of a new generation are only now preparing for launch. Therefore, the United States can respond to any increase in the price of delivery of crew members by a symmetrical increase in the price per kilowatt / hour or megabits.

2. Technological disadvantages. Spacecraft "Soyuz" and accelerating rockets have been used for decades, and all this time they have been consistently improved. But since these are single-use devices, the reliability of each run is determined by the conditions of production at the moment, and not by the statistical data recorded in the logbooks.

In recent years, there have been many unpleasant surprises associated with both hardware and software. There is also an alarming frequently used practice of hiding information from the public about such problems in Moscow and Washington. During the two next landings of the Soyuz in 2008, the detachment of the one-time descent module was not carried out normally. As a result, “Soyuz”, during landing, entered a red-hot plasma with a raised nose, which created a mortal danger to the unprotected sections of the capsule. At the start of 2009, a software crash led to unplanned rocket motors being turned on, as a result of which the space station almost collapsed due to vibration. At the end of last year, at launch, there were problems with the spacecraft emergency escape system, however, fortunately, it was not needed. In each of these cases, information about equipment malfunctions leaked out against the background of official silence. It is possible that there were more such cases, but we simply do not know about them.

3. Crew training. If there is a single and key way to enable American and Russian space crews to cope with emergencies or the failure of major space systems, then this is a long-term, deep and practice-oriented pre-flight training. Lack of knowledge or the right skill at a critical moment can lead to serious consequences in outer space, which does not forgive mistakes.

The Russian Astronaut Training Center in Star City recently experienced a turbulent period of bureaucratic and budgetary shaking, as its management (and funding) was switched from military to civilian agencies. The new director of the center and former cosmonaut Sergey Krikalev issued public warnings that it was necessary to make major investments to replace equipment that failed or was dismantled by military personnel who left the center.

Astronauts and astronauts, when asked about it, express full confidence in the adequacy of their training. However, last month, the current crew was the first in many years who could not cope with the "final exam." The repeated exam was passed by the crew, but in outer space there was no rerun and correction system.

4. Diplomatic stability. Access to the Baikonur cosmodrome, located on the territory of independent Kazakhstan, depends on the favor of the current Kazakh leader Nursultan Nazarbayev, who with an iron hand holds the ethnically divided state (Kazakhs in the south, Russians in the north, Baikonur in the middle). However, the 70-year-old president is not immortal, and the people who will replace him may be less compliant on issues such as environmental damage, payment for utility services, and fair treatment of Kazakh workers on the base.

5. Terrorism. At the launch site in Baikonur, they are quite serious about terrorist threats (from Chechen or other separatists) and conduct annual anti-terrorism exercises with the participation of military units. Previously, these special units were even more dangerous than the thought of a real terrorist attack, as their favorite tactic, as far as can be judged, was to rush in and kill everyone who came into view. Now, civilian police and contractors brought from Moscow deal with security issues at a demilitarized military base.

Considering the fact that extremist groups and Chechen settlements are scattered throughout the territory of Kazakhstan, space objects in Moscow, which are often located on busy streets, can become a convenient target located close to the house. The attacks there can cause serious damage to space flight.

6. Demography. The saddest secret of the Russian space program is aging cadres who retire or die. These key specialists are only partially replaced by new employees who are ready to work for a ridiculous salary just because they are committed to the ideals of spaceflight. Recently, active efforts have been made to search for candidates for this job, and this was done because there were not enough applications from candidates.

If we add to this another characteristic cultural feature associated with the refusal to document the procedures and events (the less people who know something, the more significant are those who can remember it), then the process of staffing is alarming from the point of view of skill levels and corporate memory due to the constant loss of indispensable skilled workers.

In the long term, NASA will be able to switch to providers of commercial launches, and will also be able to use Russian spacecraft for flights into space. And even in the short term, the risks associated with Russian space flights do not in any way guarantee that some kind of failure will occur. Rather, they identify areas where constant vigilance and troubleshooting work is needed. The absence of such works or their inferiority can lead to unexpected equipment failures.

Author:
Space analyst James Oberg worked at 22 for the year as a flight control operator and orbit developer at the Johnson Space Center. He is the author of a large number of books about American and Russian space programs. He is the author of the book “Orbits under an unlucky star: Inside the US-Russian Space Alliance” (Star-Crossed Orbits: Inside the US-Russian Space Alliance).