Portraits of the Century: Sergey Aksyonov 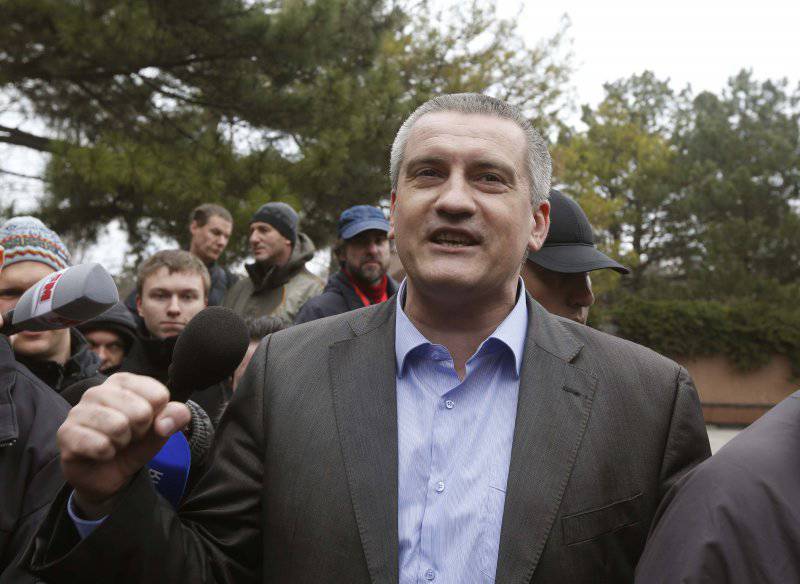 The name of Sergey Aksenov became known literally in a day, it was he who was elected the new head of the Council of Ministers of Crimea. Prior to this, Sergey was known in Crimea more as the leader and leader of the pro-Russian party Russian Unity. His appointment immediately attracted the attention of many. Who is he, what kind of person, who got to the main post of Crimea at this rather difficult and difficult moment stories the peninsula? .. Let's try to figure out the biography of Sergei Aksenov.

He is young enough, 41 is a year, for a politician it is a young age, for a man it is already quite experienced. Sergey Aksyonov was born in the Moldavian SSR, in the city of Balti, then, as is usual for many, he graduated from school, while receiving a silver medal, then the next study, he entered the Simferopol Higher Military-Political Construction School, which in 1993 finished and began to study business. All subsequent time, Sergei was engaged in business activities.

Why not choose a military career? It's simple. 1993 year. I had to choose between service in Russia and my native Crimea. Aksenov chose the Crimea. It seems to have won both.

In 1993-1998 - deputy director of the cooperative "Hellas". He was engaged in private business in the field of food, preservation. From October 1998 of the year to March of 2001, the Deputy Director of Asterix LLC. Since April, 2001, Deputy Director of Firma Escada LLC.

Then in the middle of the two thousandth, he became involved in politics as well. This is a certain frontier for any person, when you begin to look from your personal questions in the direction of what forms society, to try to influence and participate more precisely in the life of society.

Since 2008, he has become an active member of the Russian community of Crimea, as well as a member of the public organization "Civil Asset of Crimea." From 2009 of the year, he is already a member of the board of the “Civic Active of Crimea” and co-chairman of the Coordination Council “For Russian Unity in Crimea!”, Leader of the All-Crimean social and political movement “Russian Unity”. Since 2010, the deputy of the Verkhovna Rada of Crimea. 27 February 2014 of the year The Supreme Council of Crimea appointed Sergey Aksenov head of the Council of Ministers.

27 February 2014, the building of the Supreme Council of Crimea was seized by a detachment of unidentified armed men in camouflage uniforms. The officers of the Ministry of Internal Affairs of Ukraine, who were guarding the building, were expelled, and the flag of the Russian Federation was raised above the building. The seized allowed inside the group of deputies of the Supreme Commissariat of Foreign Affairs, having previously selected their means of mobile communication. Deputies voted for the appointment of Aksyonov as prime minister of the new government (No.1656-6 / 14) and decided to hold a referendum on the status of Crimea. According to the official statement of the VSK press service, 53 deputy voted for this decision. According to VSK Speaker V. A. Konstantinov, VF Yanukovich (who is considered by the parliament as President of Ukraine) called him and coordinated Aksyonov’s candidacy by telephone. Such coordination is required by article 136 of the Constitution of Ukraine.

Criminal proceedings were instituted against Aksyonov in part 1 of the article 109 of the Criminal Code of Ukraine (violent change or overthrow of the constitutional system or seizure of state power). On March 4, the Kyiv District Administrative Court granted the petition for invalidation and annulment of the decisions of the Verkhovna Rada of Crimea on the appointment of Sergei Aksenov to the post of chairman of the Council of Ministers, and on March 5, the Kiev Shevchenko District Court decided to detain Sergei Aksenov.

President of the Russian Federation V.V. Putin, speaking at a press conference on March 3, declared that he considers the election of Sergey Aksyonov legitimate.

March 1 Aksyonov issued an order reassigning himself to all the power structures of the Crimea. From that day he assumed the duties of the Supreme Commander-in-Chief of the Armed Forces of the Autonomous Republic of Crimea and Sevastopol, which he performed before the entry of the Republic of Crimea into Russia. He also appealed to Russian President Vladimir Putin with a request for assistance to the Crimea, in which he was supported by Viktor Yanukovych. 2 March announced the creation of the Navy of Crimea.

March 4 Aksyonov made statements about the possibility of expanding the Crimean autonomy at the expense of other regions of Ukraine, if the residents of these regions express such a desire and the need to create a Ministry of Defense of the Republic of Crimea.

5 March The Shevchenko district court of Kiev granted the request of the preliminary investigation authorities to detain Sergei Aksyonov and Vladimir Konstantinov, who are accused of a criminal offense under art. 109, part 1 of the Criminal Code of Ukraine (actions aimed at forcibly changing or overthrowing the constitutional order or seizing state power).

10 March Aksyonov said that there will be three official languages ​​in Crimea - Russian, Ukrainian and Crimean Tatar.

March 11 announced the nationalization of Ukrainian fleet in the Sevastopol.

17 March Aksyonov was included in the lists of people against whom the US and the European Union imposed sanctions.

22 March Aksyonov addressed the people of Ukraine, in which he urged him not to obey the actions of the authorities in Kiev. 24 March Aksyonov received a passport of a citizen of the Russian Federation.

Since April 9 - Member of the Presidium of the State Council of the Russian Federation.

Awards:
- Order "For Services to the Fatherland" I degree (2014 year) - for his contribution to the strengthening of Russian statehood, the preparation and holding of a referendum on the entry of the Crimea and Sevastopol into the Russian Federation;
- Medal "For the return of the Crimea" (March 25 2014, Ministry of Defense of Russia).

“Sergey and I met 12 years ago when he came to our office to get a license. I was surprised by the fact that I thoroughly demanded compliance with each comma in the law - I learned all the terms, all its provisions. And he went to the offices himself. Young, smiling ...

Over time, we have developed our own social circle, we have confidence in each other. He has a certain center of gravity, such a labor exchange: how many people thank him for saying that he helped in a difficult moment and gave an opportunity to calmly find a permanent job! He knows how to listen to people. The main thing for him is not to prove his own, but to understand what a person wants. If you take what matter - studies it thoroughly. Like a sponge, everything absorbs, learns all the time.

He was not going to engage in business at all: from the school the distribution was received in Moscow. But the country fell apart, it was necessary to choose where to live. Chose the Crimea. I think not regretted.

It is comprehensively developed - intellectually, physically. Idea's generator. He likes team sports - basketball, volleyball. The most important thing is that he has developed strategic thinking, and this is the feature that attracts people to him.

If he says that - behind his every word is the case. You can't catch Sergey on an empty slogan. If he moved into politics, he has gone into it, as they say, with his head: he gives it all his strength, time, energy, resources, including financial ones. And people follow him.

He has a very good reputation in the business community, and it is worth a lot. He helps a lot, and not only with money. That is, he is a completely self-sufficient person.

In politics, Sergei certainly went to protect his business. Politics — a concentrated economy. And in the economy today unfair competition reigns in our country - and in fact there is a border when the state, the law, should intervene in economic relations. However, it does not interfere, because officials are engaged in completely different things, not government. So, you need to force the state to put everyone in equal conditions.

Why does the state of Crimea like a stepson? Sergey is familiar with many Kiev officials, people's deputies of Ukraine, not to mention the Crimean parliamentarians. He calculated that the Crimea could become an “economic paradise”, for that there is everything but one: transparent schemes of work that only the state can provide. He has a normal normal family.

Lena, wife - a modest man, hardworking, and teaches children to this. He even bought a decent car just a couple of years ago, and built the house at the same time. That is, his business is only a tool, a support.

I do not think that Sergey has clearly realized his task on this earth. But I know that he will give a lot to make the life of people who live in the same time with him better and safer. This word - “reliability”, in my opinion, is best for Sergei and fits. And yet - decency ... "

Here is a biography. That's the kind of life. On the side, Aksenov is the leader. Bright, charismatic. I would not be surprised to see him on the list of candidates for the presidency of Russia this year in 2024 ...