Rinat Akhmetov - the voice of the South-East? 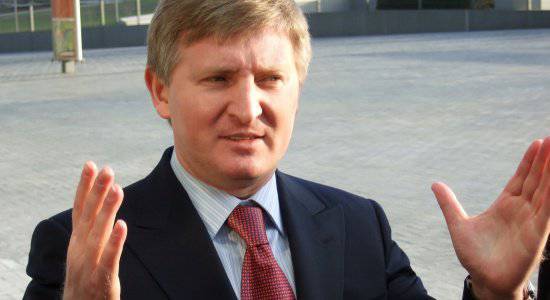 After much hesitation and a referendum, from which one couldn’t look away, European diplomacy in the person of German Foreign Minister Steinmeier decided to listen to the voice of South-East.

True, it turned out that this single voice is the only one. And it belongs to Rinat Leonidovich Akhmetov, as of April, who occupied the 101 position in the ranking of the richest people in the world.

Thus, the residents of Donetsk and Luhansk regions were given to understand: voting by voting, but issues are resolved with those who decide questions. Without a bazaar. That is, without discussion. This, if someone else did not understand, is democracy. Everything is simple and clear. There is no Ukrainian people. There are assets and asset owners. The assets are Mariupol Azovstal, Khartsyzsk Pipe, Nikopol Ferroalloy Plant, Krivorozhstal, Odessa Refinery. The owners of the assets are Kolomoisky, Taruta, Poroshenko, Akhmetov. People in this system of relations are not assets. People are liabilities. People are remembered only when the costs begin to outweigh the profits.

FROM THE METINVEST GROUP'S STATEMENT:

"The quiet work of metallurgical plants has been violated, and this is not only work and salary for Mariupol residents, it is the economic foundation of the Donetsk region and all of Ukraine.
Oh, here's the thing! The foundation cracked. This is what caused the Akhmeta group Metinvest to break the silence and express its position on the massacre in Mariupol on May 9. "Quiet work is broken." What a flowery language. And eat fish, and climb into the junta. As a result, the authors of the text "call for the abandonment of the practice of conducting large-scale battles in the peaceful cities of Donbass using the Armed Forces, heavy equipment and weapons." Who is this call for? Kolomoisky? So he has already explained what plans he has for the near future. At least with his phone call to the deputy Oleg Tsarev.

Merry Governor Kolomoisky does not make statements. He communicates with the world with the help of someone carefully listened to phone calls, in each of which there is a hint - Benny is not by himself.

He has a carte blanche and the right to broadcast signals from some more influential forces. For example, the 1 + 1 TV channel - the second Ukrainian button and one of the main popularisers of Maidan - in 2010, Kolomoisky received the Central European Partnership from the hands of the company. The company was created to hack and reformat the information space of the former social camp: the Czech Republic, Romania, Moldova, Croatia, Hungary, Ukraine. Its founder, billionaire Ronald Lauder - former Assistant US Deputy Secretary of Defense for NATO, former US ambassador to Austria ... part-time - President of the World Jewish Congress.

That such a Kolomoisky roof. So, when his militants go to Odessa or Slavyansk, one should not be surprised. Kolomoisky and Kolomoisky are interested in assets. United Ukraine they need only for this. And for nothing more. The owner of Nikopol, Stakhanov, Zaporizhia Ferroalloy Plants does not want to lose the channels of raw materials shipment. From here Odessa. A trip to Mariupol is not just an act of intimidation. It is also a way to feel the port of Mariupol. It is still a state.

In general, everything that happens in Ukraine is the apotheosis of market reforms. It’s just that before, the country was divided using the rewritten registers and seizures of factory offices. And now it’s reached tanks and helicopters.

This year, the Ukrainian Property Fund has planned — that is, even under Yanukovych’s planned — privatization of state property balances for a half billion dollars. Donbassenergo, Azovmash, Donetskoblenergo, Donetskoblgaz, Lugansknefteprodukt. Here is the old map. Ukrainian Soviet Socialist Republic. Here is the most detailed list of what they are fighting for. Economic geography in schools is no longer taught, but people who die on the barricades in the Donbass are well aware. And it seems they are pretty tired of it.

PAVEL GUBAREV (FROM THE INTERVIEW OF THE RUSSIAN NEWSPAPER):

"The leaders of the so-called people's militia began to appear in all cities. And the ruling party, our Eastern oligarchs, resorted to the same convenient means of bribing. The threats, probably, were no longer discussed, rather bribes and intrigues, so they began to work with activists It turned out that two-thirds of the activists were already on the content of the oligarch Akhmetov. "+" All the activities of Akhmetov were to merge people's anger, and all this turned out well in Dnepropetrovsk. Oligarch Kolomoisky did it, because Ukrainian there is a little bit stronger than in the Donbass "

This interview of Gubarev, released from the captivity to the Rossiyskaya Gazeta, gave rise to a very interesting dialogue, to which very few people paid attention. The Party of Regions stood up for Akhmetov’s defense.

Quote on the site (FROM THE PARTY REGIONS STATEMENT):

First of all, we would like to emphasize that the assessment of the activities of Rinat Akhmetov, the author of the program "Orphanhood - NO", the creator and organizer of the system of children's sports schools, a man who did a lot to fight tuberculosis and cancer in the country, who reconstructed and created from scratch hundreds of thousands of jobs, built the famous Donbass Arena, made a huge contribution to the development of Donbass and all of Ukraine, will be given by the society, and not some impostor and crook. By the way, the Russians, it seems, hardly imagine what the “people's governor” really is in the conditions of Ukraine. If it is available to explain, the picture looks like this - this is when a group of homeless people from the beach in Tuapse brings their leader to the Krasnodar Duma and declares: “Here is your new people's governor”. At best, the whole company headed by the “leader” will be in a lunatic asylum.
That's how. Indeed, oligarchs are always big benefactors. Incredibly responsible and kind-hearted people.

In December, the 2011 group in Akhmetov in Washington was even presented with a special award - for social responsibility. This sticky myth - that the oligarch will make Ukraine happy, you just need to finally find the right oligarch - the main Ukrainian curse. Since their oligarchs can not cope, they call on the reign of the Vikings. News that the son of Biden’s Vice President, Hunter Biden, will join the board of directors of the Ukrainian oil and gas company Burisma, has caused a lot of noise. But here it’s not the Burisma itself that is important - another Cypriot offshore, extracting 450 million cubic meters of gas under Poltava, that is, less than 1 percent of the total consumption of the country.

Important personalities. Burisma is controlled by Nikolai Zlochevsky - a member of the Party of Regions and the Minister of Ecology in the government of Yanukovych. That is, Burisma began to employ Americans before the Maidan. In the past, Hunter Biden headed Paradigm Advisors hedge fund - along with Uncle James and financier Stanford, who was eventually convicted of 110 years for fraud. But the most interesting character is Biden Devon Archer’s partner. Archer, who was in charge of raising funds for John Kerry’s election campaign in 2004, is not just close to the Kerry family, although he is friends with his stepson Christopher Heinz, heir to the founder of the ketchup empire Heinz. Archer leads Diamondback Tactical, a company specializing in weapons production for special forces. The chairman of the board of directors is Stephen Capes, "who resigned from the post of deputy director of the CIA on 2010 with a length of service of 30 years." The executive director is Andrew Blair, a former adviser in the State Department's anti-terrorism office, a senior advisor to the US ambassador to the Balkans. The company's motto is "serious equipment for serious people." It's like that.

Author:
Konstantin Semin is a journalist, documentary filmmaker, host of the Agitprop program on Russia’s 24 channel, winner of the DocChallenge festival, nominee of the Emmy award.
Originator:
http://www.rubaltic.ru/persona_grata/19052014_rinat_akhmetov/#t20c