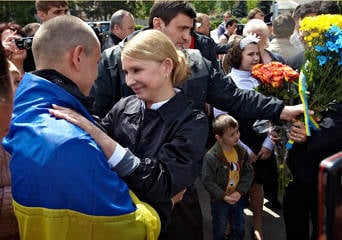 There will be no presidential elections in Donetsk (3 352 382 voters as of 2014 year) and Lugansk (1 797 379) regions. It is practically officially recognized by the Acting Minister of the Interior Arsen Avakov. By the way, the round table of the so-called “national unity” 21 may not be in Donetsk either. What is there a round table ... Take out along with the chairs. And this is at best. Well, in the Crimea, which is still considered to be a Ukrainian electoral territory, a temporarily occupied country that supplies energy to us, the election of the president of Ukraine is also canceled. Minus one and a half million voters.

No, according to Arseniy Yatsenyuk (he has also been performing since February), the head of state will be elected throughout the country. Just the concept of "Ukrainian territory" has become rather blurry. Especially when you consider the lack of border control at the eastern borders. That is, in the Crimea, according to Arseny Petrovich, the elections will be held, but their result, for objective reasons, cannot be established. Something prevented the deployment of polling stations on the Crimean territory. And one polling station located on the border between the Republic and the Kherson region, immediately behind the tent “Rodynna Kovbaska” (which is strictly not recommended for patriots), is unlikely to create a complete, unbiased picture of voting in Crimea. An interesting, by the way, legal phenomenon: there are de jure elections, but de facto they are not. However, all true patriots who remain in occupied territory by mistake are free to come and cast their vote. Since the absolute majority of patriots of Ukraine are Crimean Tatars, the paradox of the situation slightly intensifies. But this fact, of course, does not frighten the Central Election Commission and Mrs. Psaki, who are sure that everyone will vote.

If we take into account the extremely passive position of the electorate in Dnipropetrovsk, Kharkiv, Mykolayiv, Odessa and Kherson regions, it turns out that we have ten to eleven electoral mature populations outside the presidential election. Will the remaining voters be able to compensate for this strange gap with their hyperactivity? With skillful manipulation of information flows - yes, without a doubt. Turnout in Galicia will go off scale for one hundred percent. This is possible because they will tell us that an unprecedented number of refugees from the conflict zone showed a fervent, literally intolerable desire to elect a new, fresh President of the country. Much lower turnout figures in the eastern and southern regions of Ukraine will try to compensate with victorious reports of unprecedented, almost anomalous electoral activity in truly European regions.

Such a deviant vote calls into question the legitimacy of the product of this electoral show. The absolute majority of patriotic analysts (a special category of member-headed iksperdov, born on Maidan in dubious political conditions) have been shouting for a month about the main intrigue of the elections: will there be one round or two? This simple move, designed for complete morons, which we believe, allows you to divert attention from the problem of recognition of election results. Therefore, it is very important that there is one tour. Then everyone will start to shout about the unprecedented support of the new head of state, who has mastered voters right off the bat.

Against the background of euphoria, skillfully bloated with the help of primitive means of public relations, you can somehow forget about the Lugansk and Donetsk republics, the abducted heads of election commissions, the shelling of Slavyansk, the exact number of people killed during the "antiterrorist operation" (the version of the SBU head about 23 on the part of the ATO forces is clearly not true), as well as a complete political impasse in the form of a round table, at which mainly senile and former presidents gather. However, by and large, it is one and the same.

But elections in two (and more!) Rounds will sharply exacerbate the problem of “lost” ten or eleven million voters. In this case, after 25 May, there will be a very inconvenient pause, which can be filled with the decay products of the ruling temporary coalition. As we already understand, Tymoshenko and Poroshenko will make it to the final, which makes the opposition fabulously magical. It is clear that in this situation the number of voters who ignored the elections will increase by another several million. In other words, the legitimacy of the head of state is further devalued. This is the first moment. The second is that it is impossible to resolve the opposition of two candidates from one political spectrum within the framework of elections. We are talking about the annihilation of one of the applicants. Indeed, even a full down specializing in political science forecasts cannot imagine the dualism of power according to the scheme of Poroshenko — the president, Tymoshenko — the prime minister. The logic of the development of this conflict involves the complete elimination of Yulia Vladimirovna. But this is easier said than done. Do not underestimate the old woman. I know her since the nineties of the last century. Today we are talking about her last active role in politics. And so simply it will not disappear from the political scene. Yes, Tymoshenko is not the same. Aged, lost charisma, team, former sexuality. However, the grandmothers in the distant villages of Central Ukraine are still rubbing election campaign posters with Yulia Vladimirovna, flies away in the houses of their flies. Dachivouzhtam ... My mother-in-law suffers over the choice: Tymoshenko or Poroshenko? And this, I must admit, is an extremely alarming symptom.

So far everything seems to be going to one round of voting. Tymoshenko frantically tries to push through the election of a new version of the Constitution, in which the powers of the head of state are cut to the very tomatoes, and all power is actually transferred to the prime minister, approved by the Rada. A kind of parliamentary republic. The meaning of the option is clear: the head of state is elected, but he cannot appoint the prime minister. More precisely, it can, but it will be she, Julia Vladimirovna. No need to laugh, the script is really trying to push through. Including with the help of threats to start the third Maidan of the next dignity. Why do you think Rada is now working one day a week? Because everyone is waiting for how this epic confrontation will end. Yulia Vladimirovna is interested in a two-round vote to push the Constitution between the first and second rounds. Exactly by June and the Venice Commission will expand. She also sent three versions of the Basic Law. To bitch, penetrate. What is written there, no one really knows. Even Marina Stavniychuk. But, along the way, we are talking about different versions of the constitutional castration of the new president. Moderate to complete removal of organ effects. So far, as we have already noted, one-color dominates. However, Tymoshenko hopes that her secret rural electorate will work.

But no matter how the epic confrontation of the two candidates develops, the main conclusion is quite different. Presidential elections will not fulfill their main function: sewage of political sentiments of society. After all, how was it before? One part of the society was losing, resigned to the results of the voting and was preparing a revenge. Now this scheme does not work. One part of the society does not recognize the election results, the other part of the society will aggressively impose them. And it is precisely this fundamental contradiction that cannot be resolved by political means. All the more military.