21 May 2014
36
April 14 in Shibok, Nigeria, Islamists from the Boko Haram group kidnapped 276 girls. Then the leader of this elusive gang Abubakar Shekau declared that he was going to sell schoolgirls into slavery and that the girls had to not go to school, but get married. Girls are still not released. 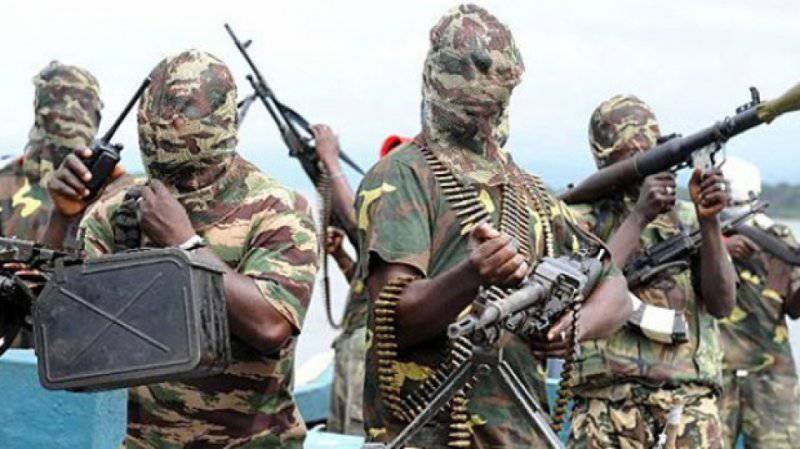 12 May has a new statement "Boko Haram". The organization will not let the girls go until the government releases the arrested militants. The bandits also said that all schoolgirls are converted to Islam.

The government refused to comply with the conditions of the terrorists.

The UN condemned the abduction. The head of the United Nations Office on Drugs and Crime, Yuri Fedotov, said: "I express my outrage at the abduction of these girls, as well as the abominable threat of selling them into slavery." As transmits RIA News"Fedotov expressed support for the families of girls. “I hope that those responsible for these outrageous acts will be detained without delay, put on trial and placed in custody,” he said.

Michelle Obama, the spouse of the American president, took part in the information campaign for the release of girls. She came up with a hashtag for Twitter - “Bring Back Our Girls” (“Return Our Girls”) - and said: “In these girls, Barack and I recognize our daughters. We know about their dreams and hopes, but we can only try to imagine the suffering that their parents are experiencing now. ”

However, the reaction to the Twitter campaign of the first lady of the United States was, to put it mildly, ambiguous. Even the Washington Post didn’t keep from light criticism. As noted "Vesti", the American newspaper indicates that the photo of Michelle Obama and, probably, her message caused the appearance in social networks of another tag - #WeCantBringBackOurDead (“We cannot return the dead”). Critics of Michelle Obama (or rather, the US administration) accuse the White House of attacks of UAVs that killed people in Yemen, Pakistan, Somalia and other countries.

One of the users posted his photo with a sign that says: "Your husband killed more Muslim girls than Boko Haram during the whole period of his existence."

According to journalists, raids of "drones" over the past 5 years have killed 2,4 thousand people.

As for the abducted girls, the UK is now taking an active part in their search, along with the United States. United Kingdom as informs "BBC", sent to Nigeria reconnaissance aircraft.

In addition, on Saturday last week, African leaders at a meeting in Paris decided to declare a real war "Boko Haram." At the end of the meeting, the French president summed up: the participants agreed to adopt a “global and regional action plan”.

Very interesting. But why did no one scratch before? And why does this “Boko Haram” actually act with impunity?

There is intelligence from WikiLeaks, proving that Boko Haram is the most common CIA product.

The material on the link is huge, so we will retell the essence in brief.

The WikiLeaks documents show that the subversive activities of the American embassy in Nigeria fit into a well-disguised long-term political strategy aimed at deterring the development of Nigeria. The ultimate goal of this strategy is the elimination of Nigeria as a potential strategic competitor of the United States on the African continent.

Here is one fact as an example: in December 2011 of the year, with the help of the CIA, the Algerian wing of terrorists issued 40 million naira. This money went to “partnership” with “Boko Haram”.

The strategic impact at the regional level was decided to be exercised on Nigeria through the Inter-African Peacekeeping Forces (ECOMOG). It was through this organization that the US government, together with its allies, hampered Nigeria’s growing influence in the subregion. This was called "quiet diplomacy."

Back in the days of Secretary of State Warren Christopher, secret hearings were held in Congress, where relevant reports of the CIA, the Pentagon and the State Department were reviewed. In order to suppress Nigeria, it was decided to diplomatically "help" some key African countries by combining them through ECOMOG. At the same time you can throw them (or rather, promise) military and humanitarian assistance.

Today, many Nigerians are wondering: what is really “Boko Haram”? Why is this organization as if invisible - and yet so destructive? Why militants do not want to negotiate with the authorities? And most importantly - why do they make attacks with such ease, while remaining elusive?

According to WikiLeaks, Boko Haram, in its current form, is organized by the CIA. The activities of militants in the field is coordinated by the American Embassy in Nigeria. The CIA secretly trains militants in camps on the outskirts of Niger, Chad and Cameroon. Young people from poor, dysfunctional and disconnected regions flock to these camps. This is the most suitable material for the molding of "rebels".

Tseerushnye agents who recruit these young people lure the guys with promises of a better life and work in the name of Allah. Then they are told that they are acting for the benefit of the coming Islamic order - instead of the “godless” that dominates unfortunate Nigeria today.

The CIA officers in charge of the project themselves are prudently keeping a low profile. In the camps, the process is supervised by curators of Middle Eastern origin, specially hired for these purposes.

The final US strategy to weaken Nigeria should be the dismemberment of the country in 2015. In any case, this is an assessment of the National Intelligence Council of the United States Government.

According to the plans of the future interventionists, the Nigerian state will "fully mature" by 2015 for disintegration and intervention. The decisive stage of the intervention will, of course, be the receipt of the UN mandate. No one will probably be surprised that the United States will be the first to bother about obtaining this mandate.

Maybe that’s why M. Obama’s network initiative provoked a reaction opposite to the one expected.

Ctrl Enter
Noticed oshЫbku Highlight text and press. Ctrl + Enter
We are
African "Caliphate". Northern Nigeria follows in the footsteps of the Middle EastResults of the week. “We won't give you the keys! We're not Pinocchio! ”
Military Reviewin Yandex News
Military Reviewin Google News
36 comments
Information
Dear reader, to leave comments on the publication, you must sign in.