"Right Sector" is preparing for war with Russia 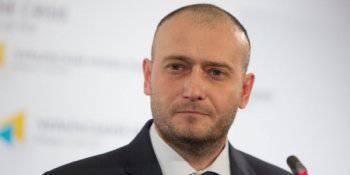 According to the polemika.com.ua, referring to the press service of the "Right Sector", the leader of the organization, presidential candidate of Ukraine Dmitry Yarosh, spoke on the First National Channel, who said that two more Donbass battalions were being created in the Donetsk region.


“According to the information that I constantly receive, the introduction of Russian troops in the eastern regions of Ukraine is absolutely real. Today we see the inability of state power structures to confront. In my opinion, Russia, having entered troops into the territory of Ukraine, will be defeated because of the deployment of a large-scale partisan war, which will be based on voluntary units that are already being formed in the Donbas, ”Yarosh said.

“We are in constant contact with the battalions and coordinate our activities in the Donetsk region. Literally two days ago, Bolshaya Novoselka, one of the regional centers of the Donetsk region, thanks to the actions of the Donbass-1 battalion, has already come under the control of Ukraine. That is, everything can be done according to the Ukrainian, not the Russian scenario, ”he stressed.

It is worth recalling that the Investigation Committee of Russia opened a case against Dmitry Yarosh, accusing him of publicly calling for extremist and terrorist activities through the media.

Ctrl Enter
Noticed oshЫbku Highlight text and press. Ctrl + Enter
We are
Reports from the militia of New Russia for 9 September 2014 of the year
Military Reviewin Yandex News
Military Reviewin Google News
189 comments
Information
Dear reader, to leave comments on the publication, you must sign in.