20 May 2014
3
In December, 2012, a funeral for a Syrian army soldier, Bassam Shaaban, came to a village in the Safit district of Tartus province. In the mournful report, it was said that he died a brave death while defending a military school in Aleppo, which was attacked by terrorists.


In many cities and villages in Syria, there are walls dedicated to the portraits of fallen heroes, as well as innocent civilians. Mourned the family of a soldier. Placed his photo on such a mournful wall. 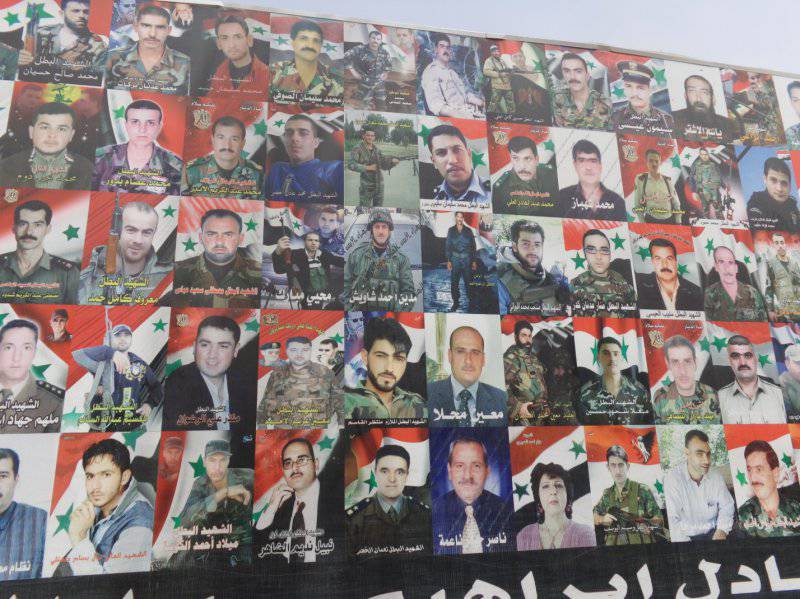 Now, as you know, the agreement on local reconciliation in Homs has entered into force. In addition to the release of militants from the areas of the Old City, it also provides for the release of many kidnapped military and civilians.

It turned out that Bassam had spent all that time in captivity with the militants. And here he is released. He returned to his native village, hugged relatives and friends who no longer hoped to see him again. And with his own hands took his picture from the wall of the fallen.

Perhaps, already in order that the residents of a small village, who met their hero alive, could rejoice - it was worth starting the practice of local pacification! A practice that has saved thousands of lives, but which the Western world refuses to support, louder than others about some kind of democracy ...

Unfortunately, most of the portraits still hang on these sad walls.

Now, in the center of the city of Homs, one of the squares will be named Al-Shuhada - the Square of the dead heroes. On instructions from President Bashar Al-Assad, Prime Minister Vail Al Khalki visited Homs and proclaimed the opening of a new square - in honor of those who gave their lives, who shed blood, defending their home country from terrorists supported primarily by the United States and Western countries .

And the living will have to continue this glorious struggle for the honor of Syria, for the very existence of the Syrian people.

Busted by bandits historical Homs center is gradually returning civilians. Here and there on the streets you can see trucks loaded with personal belongings returning to their home ashes. There are also cars, almost bending from the gravity of the boxes and boxes attached on top. 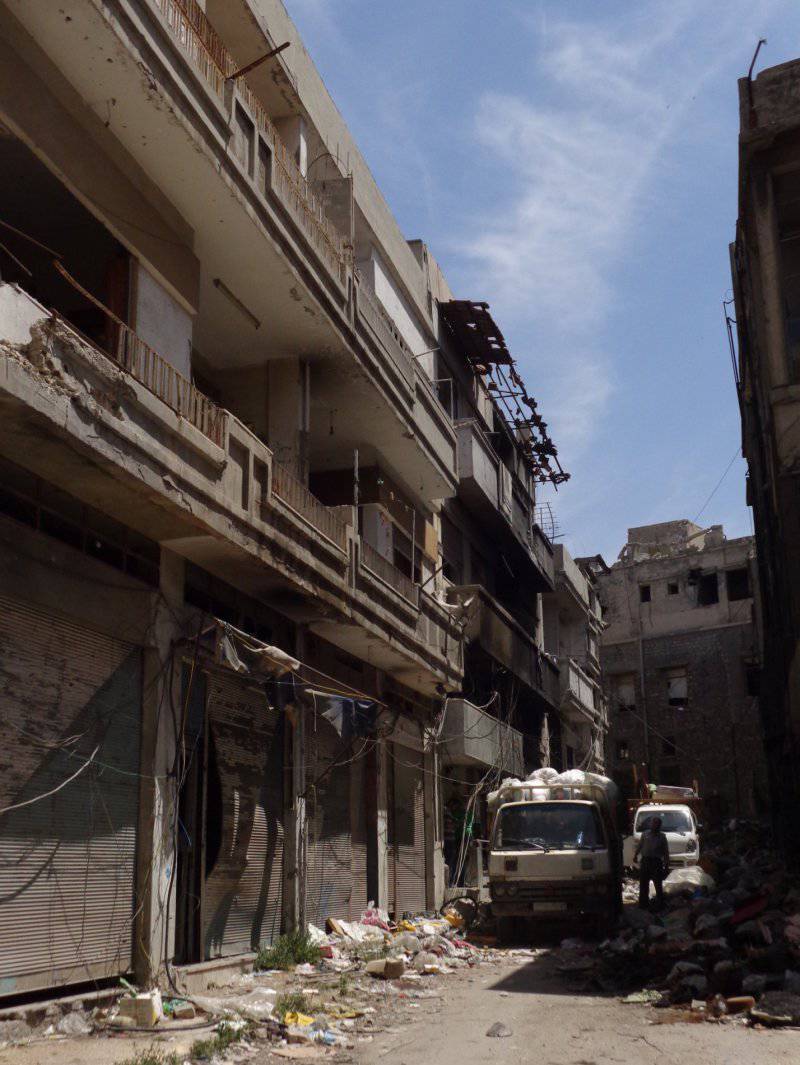 People sort out the debris of things around dilapidated homes, trying to find at least something of his former property. 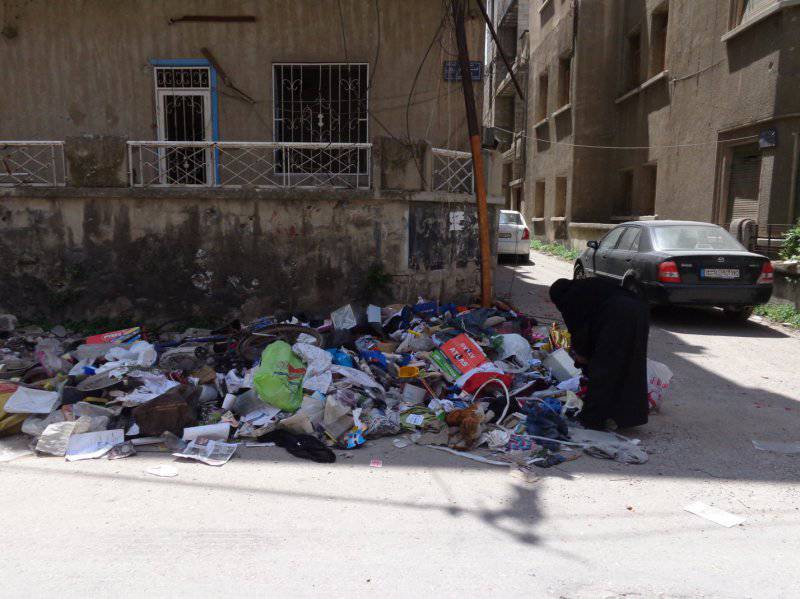 With the hope of a new life, the inhabitants of the center of Homs return to their homes. With hope for a new life, the Syrians are waiting for the presidential election. Across the country - in big cities and small towns - mass street actions continue, the participants of which, against the will of the West, express support for the current president, Bashar al-Assad.

On May 17, a meeting in support of the upcoming presidential elections was held in the center of Damascus, on the street adjacent to Yusef Al-Azme Square, near the Sham Hotel. 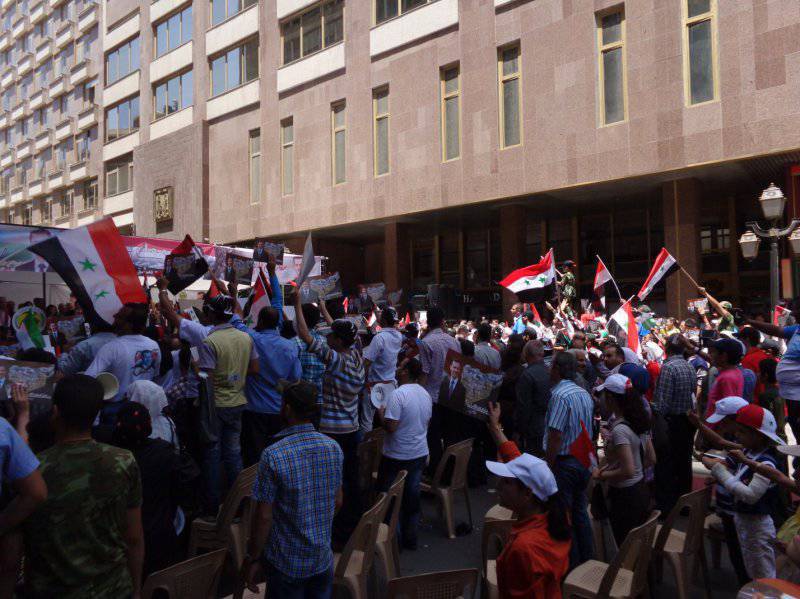 Thousands of people came to share. In their hands are Syrian flags, portraits of President Bashar Al-Assad, as well as photos of the dead heroes.
18 May patriotic rally was held in the village of Ashrafiya Sakhnaya province of Damascus. Many came with children. No one is afraid of terrorists. Express their political position in the open. People from the balconies welcome the protesters, hanging out the national flags. 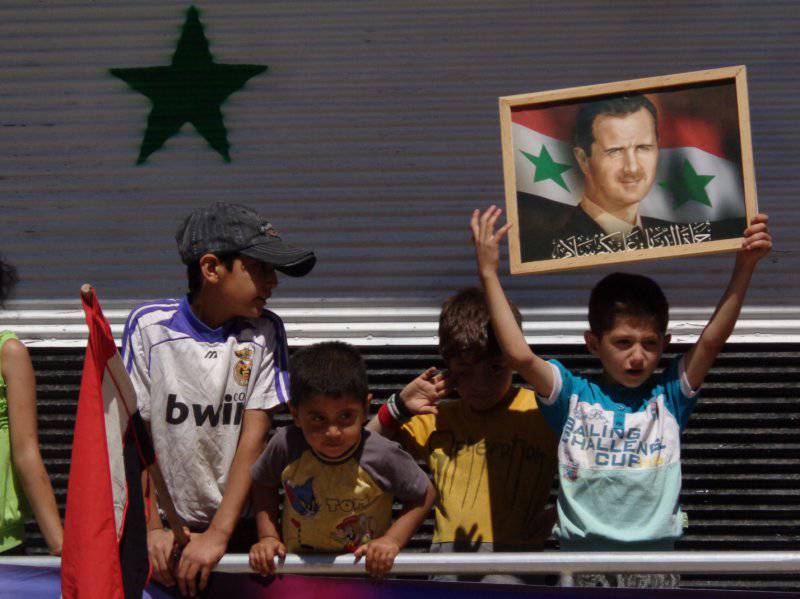 At the same time, the Syrians are very warm to Russia. The appearance of me as a citizen of Russia has inspired the protesters. Here is what one of its organizers said: 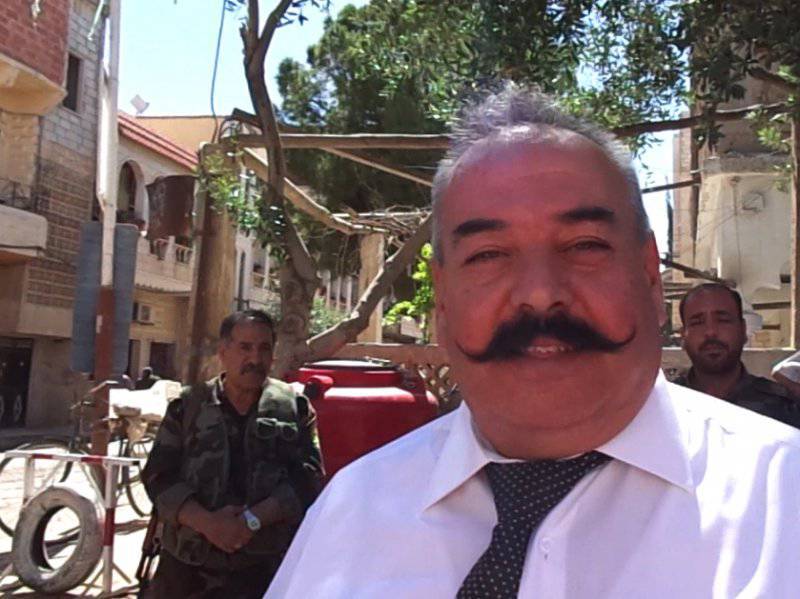 - Here is a meeting in support of the army and the president, which is held on the eve of the June 3 elections. Relations between Syria and Russia are based on mutual respect, in various plans, both politically and culturally. These relationships are at the highest level as well as at the lowest.
I am writing these lines on the night after the patriotic rally in Ashrafiya Sakhnaya. Outside the window - the sounds of battle. At midnight, militants from the neighborhood of neighboring Dareia fired several mortar shells around the village and tried to attack the peacefully sleeping residents. The army repelled the attack. Earlier in the day, law enforcement agencies neutralized a mined car in Sahnai by preventing a terrible terrorist attack.

Syrians realize that they can pay for their civil position, to become victims of vile revenge on the part of terrorists. Nevertheless, they take to the streets, despite the real threats to life. Every day soldiers are killed in battles - but in their place new heroes appear who continue to fight. This is one of the main reasons why the West and the monarchies of the Gulf, despite all their diabolical efforts and the billions of dollars invested in bringing Syria to their knees, have so far failed to do so.