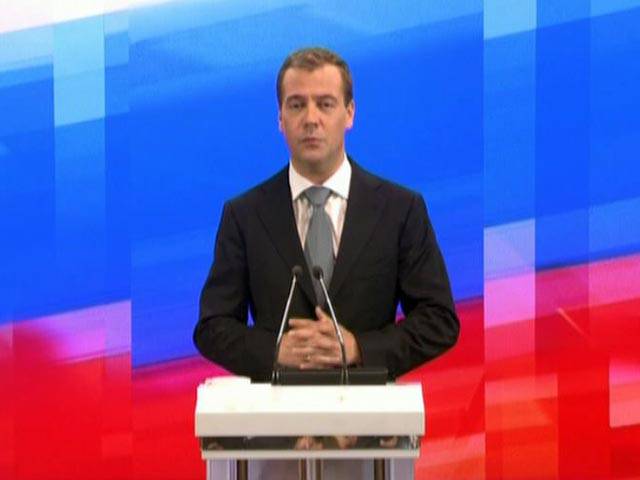 The President of the Russian Federation, Dmitry Medvedev, held at 18 in May at the Moscow School of Management Skolkovo, on the basis of which the Skolkovo Innovation Center is being formed, his first big press conference in three years of presidency for Russian and foreign journalists. As it has long been accepted in Russia, nobody asked the “sick” questions to the president - they did not ask about his attitude to Putin’s “All-Russian Popular Front”; about the actual catastrophic situation with the health of the people; about the catastrophic situation with the entire infrastructure of the country - from roads to energy; about actually “Hitler's” reforms in the field of education, medicine and many other things.

Most of the more than 2-hour speech, D. Medvedev dealt with idle talk, he did not give even a clear answer to the questions asked. The expectations of the press and political scientists that Medvedev will finally announce his nomination for a second term did not materialize. The only thing that was said with certainty is that the president and the prime minister will not run for the same time. The words about the unity of the tandem sounded quite mundane: "We are really like-minded people with him, no matter what they say on this topic."

As usual, unsupported words were said about “modernization:“ Modernization is the most important direction of development of our country, and, in my opinion, this should lead to a qualitative change in the situation in the country ”. Much more significant these words would have sounded if during the first term Medvedev had launched several real programs, a model of the Soviet Union or the PRC: say, they launched the Moon program with real deadlines, financing, responsibility (including criminal) of project managers; fulfilled the 100% program of housing for officers, they promise since Yeltsin’s time; would create a real program to restore the size and growth of the Russian people and a number of other indigenous peoples of Russia, and so on.

On Russia's foreign policy: Medvedev assured journalists that Moscow will no longer support Libyan-style resolutions, in particular with regard to Syria. In addition, he once again assured about the continuation of the course towards integration in the field of European security - the creation of a common European missile defense system.

Medvedev “boasted” with his success: during the financial crisis and rising unemployment, they were able to retain control and even “protect” themselves during the Georgian attack in 2008.

Judging by the previous events: the announcement of the creation of the "Popular Front", the resignation of Mironov from the post of chairman of the Federation Council, the delay in the response of the next term - Medvedev may not run for office. Although he has a “loophole” - he said that a political party can nominate him, since “Fair Russia” is now in opposition, it can only be “United Russia”. It was said about the possibility of rotating the government: “The president has certain powers to form a government. And by retirement. I did not refuse them. Here. "

The result of this session: Russia still does not have a long-term development strategy, a Plan, a Program, Goals. Medvedev, instead of being the leader, the “leader” of the nation, is busy generating “signals” of empty hopes and expectations. The state is increasingly getting rid of responsibility, they say, the people “themselves” should take care of themselves. And what do we have such power? ...