In the "gas war" Putin puts checkmate to Obama 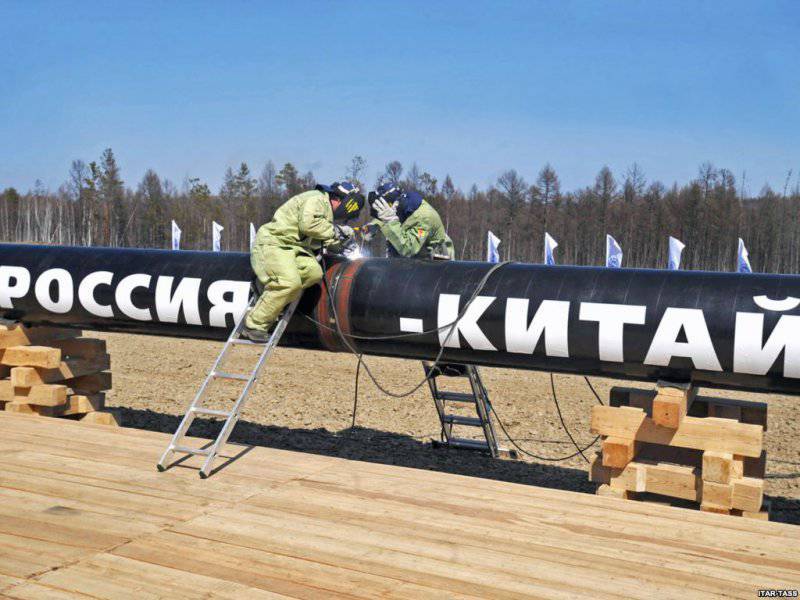 Russian President Vladimir Putin today arrived in China. This landmark trip has been known for a long time, as well as about the deals that Moscow and Beijing are planning to conclude. Despite this, official representatives of the United States with indifference did not comment on the meeting, and pretend that Russian-Chinese relations are of secondary importance for them. In fact, the West, like never before, keeps track of the negotiations, because thanks to the new agreements, Gazprom will be able to enter new markets and compensate for the losses inflicted on the capricious Ukraine. At the same time, Russia and China will get rid of the American stranglehold, gain solid ground under their feet, and are likely to prepare for a counterattack.

The Ukrainian-Russian gas conflict may reach a qualitatively new level, since the European Union will be involved in it. The likelihood of this scenario is very high: in the EU, under pressure from the United States, they have already declared their readiness to side with Kiev if Russian gas supplies to Ukraine are reduced. Of course, at the same time, Europe itself will lose gas from Russia - but what to do, Washington’s desire for the modern European elites is the law.

In such conditions, Russia has two options: the first is to persuade Europe to abandon the defense of American interests and take a reasonable position; the second is to find gas markets that can become an alternative to the European one. Obviously, the Kremlin will, to the extent possible, deal with the implementation of both scenarios, one of which should eventually become the main one. This is a wise decision - you can not put eggs in one basket.

The main option is increasingly considered the supply of Russian gas to new markets. This is due to the irreconcilable position of the United States towards Russia: Washington, despite the absurdity of the situation, evades negotiations, and continues to speak the language of ultimatums. If the destructive rhetoric of the West will continue to hinder the maintenance of mutually beneficial trade relations, Moscow will be forced to reduce gas supplies to Europe.

Against this background, the visit of Vladimir Putin to China is presented as sensing the soil before Russian energy suppliers enter Asian markets. During the meeting between representatives of the Russian Federation and the People's Republic of China it is planned to sign an agreement on the supply of "blue fuel": in the year Moscow will sell Beijing about 38 billion cubic meters of gas. This figure is relatively small: for comparison, in 2013, only Ukraine, Gazprom sold 30 billion cubic meters of gas. However, in the future, China may increase purchases, because Chinese manufacturers need a much larger amount of "blue fuel".

Together with the gas supply contract, the negotiations will discuss the issue of China buying Russian oil. Igor Sechin, head of Rosneft, will arrive in China as part of the Russian delegation. His company has already prepared the necessary documents to be submitted to the Chinese corporations CNPC and Sinopec. In particular, it is planned to begin the implementation of several projects in the field of oil refining. Also, companies from China will have the opportunity to participate in the development of continental and offshore oil fields in Russia.

China is trying to get out of the trap

There is practically no alternative for China: Beijing is doomed to buy oil and gas from Russia. The Middle Kingdom lacks its natural resources, and it is forced to seek sources of growth abroad. The main directions of the "energy expansion" of China are Russia and the Pacific Ocean: recently, considerable mineral resources have been discovered in the seas near the Chinese coast. True, the PRC has unresolved territorial disputes with its neighbors, which makes it impossible to extract resources. Of course, you can use force to keep control of the waters - but this is a risky move that will lead to China’s isolation.

Much more profitable for China will be buying gas from Russia. There is no need to risk, and the volume of natural resources in Siberia seems inexhaustible. Russia, in turn, will also get rid of the risks: gas supplies to Europe are hampered due to the conflict in Ukraine and the intransigent policy of the United States intending to disrupt relations between Moscow and Brussels. In such conditions, Russia has nothing left but to find more reliable partners, independent of the opinion of their overseas "friends".

The energy union of Russia and China - the two mighty powers - is contrary to the plans of the United States and poses a serious threat to Washington. In the United States, they expected to isolate Russia, depriving it of sources of income, and strangle China, blocking the access of resources to the Chinese market. These measures would be a key step towards eliminating America’s competitors on the Eurasian continent.

However, with destructive policies, Washington only pushed its rivals toward rapprochement. In the United States, they hoped that China would oppose Russia on the issue of self-determination of the Crimea, but they miscalculated: it was already clear that America would not be able to turn its enemy into a temporary ally. China showed itself well during the March crisis - well-considered decisions, restraint and caution allowed Beijing to make the right choice, and he took the side of Moscow.

In connection with the upcoming signing of contracts for the supply of Russian gas, the Ukrainian and Western media have launched a massive disinformation campaign designed to discredit Gazprom. Spiteful critics say that China will buy "blue fuel" at a huge discount. The press service of Gazprom denied this information and said that Celestial gas will get at the average European price of 350-380 dollars per thousand cubic meters. Thus, Russia is not being sold into “energy slavery” to China, as it is claimed in Washington, and cooperates on equal terms with its Chinese partners. All honest!

However, in the near future, Russia may encounter with the competitors in the Far East, first of all, with Qatar. This little emirate recently broke with Washington itself, disappointed in the Syrian adventure, and is now actively reorienting itself to the east. The leaders of the emirate consider their main goal to enter the Chinese market, which is in dire need of external resources. In the near future, Qatar will try to gain a foothold in Southeast Asia, whose gas market is still free.

The Russian leadership acted wisely by starting negotiations with China and beating Gazprom’s main competitors. Thanks to the signing of mutually beneficial contracts, Russian energy suppliers will be sufficiently protected from encroachment on the part of 30 years ahead.

In the future, Russia could start exploring other Asian markets. For example, South Korea and Japan, which, in comparison with China, possess incredibly limited resources, desperately need fuel supplies. True, this requires an appropriate infrastructure - terminals capable of receiving gas carriers, and a system of pipelines necessary for delivering gas to consumers.

However, the Middle Kingdom is also enough for the test: if Moscow perfectly recommends itself in relations with Beijing (which is beyond doubt), other states of the region can also become its partners. Virtual sanctions are unlikely to prevent this: the West is afraid to destroy the oil and gas sector of the Russian economy, as it will be suicide for Europe.

In general, the United States, despite the ostentatious disdain, is alarmed in earnest. Each action of Vladimir Putin makes Washington politicians seriously think about a radical change in the principles of policy towards the countries of the Asia-Pacific region: so far all the actions taken by Washington have been ineffective, and sometimes they have the opposite effect. Now, when the struggle is being transferred from Eastern Europe to the Far East, America will try new approaches - despite the successes, Russia needs to be wary of traps. However, any American cunning can be overcome by Russian unpredictability, especially since Moscow has also armed itself with Chinese wisdom ...

Ctrl Enter
Noticed oshЫbku Highlight text and press. Ctrl + Enter
We are
Dmitry Medvedev. Russia and Ukraine: life under the new rulesStrangulation: the context, conduct and consequences of the American naval blockade of China
Military Reviewin Yandex News
Military Reviewin Google News
182 comments
Information
Dear reader, to leave comments on the publication, you must sign in.