The head of the DPR parliament: "We have a unique opportunity to change everything ..."

20 May 2014
83
We begin a cycle of interviews with top officials of the republic. Our first interviewee - Chairman of the Parliament of the Donetsk People's Republic Denis Pushilin. 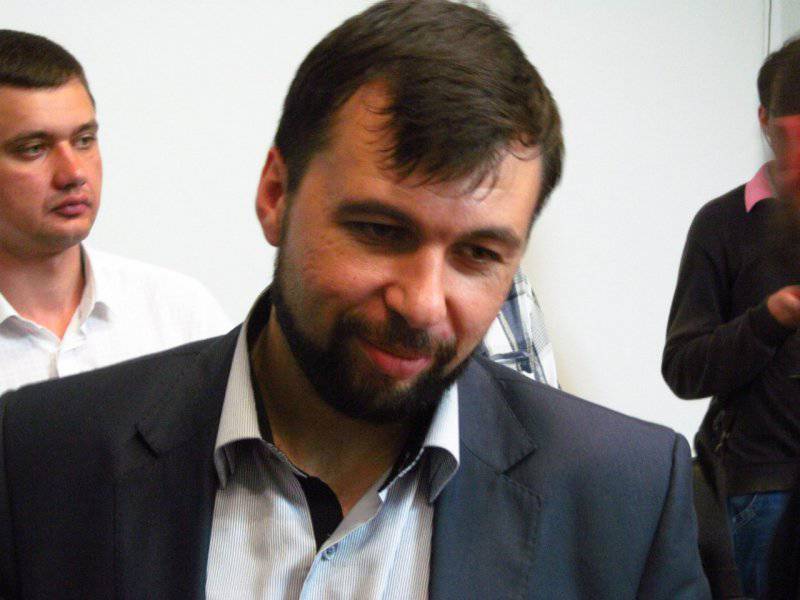 Denis Vladimirovich was born 9 in May 1981 in Makeevka, Donetsk region in the family of metallurgists. He spent his childhood and youth in his homeland. In 1998, he graduated from the Makeyevka City Lyceum. From 1999 to 2000, in the Armed Forces, he was demobilized as a senior sergeant of the National Guard of Ukraine. Now it is hard for him to talk about it: “This is a completely different guard. Its very name has become a common noun, a synonym for punitive. When killing fellow citizens, the Kiev junta kills and the memory of the little good that connected citizens with that already unrecoverable Ukraine ...”

After the army I was looking for my place in the sun. Who just did not work - from the security guard to the head of the department of a trading company. At the same time he studied: he graduated from the Donbass National Academy of Civil Engineering and Architecture, an engineer by training. Married

-In early April, you became the deputy people's governor, Pavel Gubarev, one of the leaders of the protest movement of Donbass. What was the "trigger" of the irreconcilable resistance of the Kiev "power"?

-Maydan. The “trigger” for millions of citizens of the then united Ukraine was the chaos perpetrated on the Maidan.

From the first "peaceful" demonstrations to an armed coup d'état, I was in Kiev, I personally watched everything, talked with the Berkut fighters, soldiers of the Internal Troops, many Kievans and people who came to fight the Yanukovych regime from different regions. These are idealistic idealists of Euroormancy, and paid-for "full-time revolutionaries" without convictions, and ideological nationalists. Conclusion: supposedly spontaneous protests were tightly controlled from the outside, Maidan - a project of the final colonization of Ukraine by the European Union and the United States. And the direct organizers and implementers of the project: the oligarchs, the then opposition and ordinary Ukrainians for the project developers are nothing more than political technology stuffing. It was completely obvious: what is happening is exactly the same as the scenarios of all the designed revolutions, be it the 1917 revolution of the year, the massacre in Moscow in the 1993 or the events in Libya of the 2011. Already in the early days of Maidan, I predicted the inevitable appearance of snipers, and that is what happened. The tried-and-true "blow off and tie with blood" technology to divide the people into theirs and enemies, murderers and victims, and to make civil war inevitable.

It was completely clear to me: Maidan is a model of the future for Ukraine: the final spurt towards death, a fall along the 1991-2014 trajectory - from high technology and the best education in the world to radishes and pigs grown in the center of the capital of Europe’s largest state by feral “European choice” "...

It had to be confronted so that the whole country would not become a torn Maidan. Returning to Donetsk in early March, I immediately joined the protest movement. First, as an ordinary participant of rallies, then as an organizer. There were many dissatisfied events, but no organization. Different groups - with left, right, centrist views could not agree and act on a single plan. I considered my task to unite these groups. The most important goal that unites all those dissatisfied with the Kiev junta is holding a referendum on the status of the region, and striving for this goal dictated all other actions.

“Then the aim of the majority was only federalization, and there was no unequivocal interpretation of this concept among representatives of various political forces and social movements. How did you manage to convince them that federalization will not solve anything and it is necessary to submit the question of state independence of the region to a referendum?

-Yes, at first, the majority suited the federalization of Ukraine. However, there was a trap in this: the federal structure does not cancel Kiev’s obligations to sign the second part of the Agreement with the European Union. Let me remind you that in the text of this part of the Agreement - the only word in Cyrillic is “GOST”. The refusal - at the request of the EU - of state standards deprived us of trade and economic cooperation with the countries of the Customs Union, dooming our industry to degradation.

- The referendum was held, the region received the status of an independent state, the Cabinet of Ministers was formed. And the citizens of the republic immediately had questions: on what basis was the Cabinet formed and how did the Regionals with more than dubious reputation turn out to be in it?

- This is the government "kamikaze", the office of the transition period. The task of this government is to lay the foundation for future work. These people are worthy of respect already because they took upon themselves such responsibility with a clear understanding that they are unlikely to vote for, because the voters will not get the desired result of the work of the Cabinet of Ministers for a short period before the elections. The hardest work went to those who are now supposedly at the helm. In fact, their powers, for understandable reasons, are very limited, and their responsibility is extraordinary.

As regards the presence of the regionals, this is a necessary measure. In recent years, party and social movements have been killed in the Donbas, except for activists of the Party of Regions there is no one to choose. We have a hard shortage of personnel, for all the positions of the reserve, the DPR activists tested in the struggle are not enough. The combination of ideological and professionalism in the assigned case is a rarity in any revolution, and at the stage of the beginning of state construction the problem of personnel selection becomes paramount. The republic is in dire need of specialists - economists, managers, technicians for work in relevant government committees. We invite those who are willing and able to work for the good of the republic, full scope for social creativity. The people themselves must form a fair socio-economic system, adopt laws protecting traditional spiritual values, create a society not of consumers, but of heroes and creators.

- Why is there no Pavel Gubarev and his people in the manual?

- Pavel will enter the Coordination Council, which will be created after the signing of the Agreement on cooperation between the Donetsk and Lugansk republics. In the Constitutional Court, each republic will have an equal number of representatives, this is a prototype of the highest governing body of the future Novorossia. People from the entourage of Paul are involved in the work of the established government committees. Ekaterina Gubareva, named in the first days after the proclamation of the DPR by the Minister of Foreign Affairs, cannot hold this post for reasons of a non-political nature. It is necessary, at least, knowledge of languages ​​and the ability to move around the world, and Catherine has three children ...

- Elections are scheduled for September 14. Will the electoral system remain the same or is it planned to undergo a radical change, that is, the elimination of cash deposits, the mandatory recall of deputies and other measures that ensure clear feedback and constant reporting by people's deputies to voters?

-The electoral system will not remain the same, that's for sure. We have a unique opportunity to change everything, and we will definitely use it. With genuine democracy there can be no question of the cash collateral of candidates. The Republic guarantees to every citizen the right to elect and be elected to the authorities at any level, as well as the right of direct control of all representatives of the authorities and the possibility of their withdrawal and re-election in case of non-implementation of programs approved by voters. The regulatory framework of the electoral system is now in the process of development. For now, I will only say that IP will be majority-owned, and its conceptual basis is to separate power and business, to prevent the possibility of the occurrence of corruption mechanisms destructive for the state.

-Since the selective system of the DPR is a majority, then what are the main goals of the United Russia party you are creating and the party of Novorossiya Pavel Gubarev?

- The goals are ideological. We are now considering two options: either all parties in the republic will be banned, or they will be equated with public organizations whose purpose is ideological work, primarily with young people. For so many years, we were imposed on an alien destructive, godless-consumer system of "values", diligently liberal-fascist and ultra-Nazi dead mythology tried to replace our living traditions, to kill the memory of the One Motherland in us. And many began to forget that we are Russians, we are Orthodox, we are an organic part of a unique civilization that gave the world the greatest saints, warriors, poets, scientists, creators of the unique space technology and philosophies. As the great commander Alexander Suvorov said: "Every soldier must know his own maneuver." So it is with us - every citizen should know what benefit he can bring to the republic, and therefore to the whole Big Russian World.

- What will be the economic policy of the government at the first stage of state construction? Everyone understands that deoffshorization is inevitable, otherwise the republic will not survive. At the same time, the “master of the region,” Rinat Akhmetov, refused to pay taxes to the budget of the DPR, his metallurgical enterprises were guarded by the National Guard, there is information about his contacts with Kolomoisky in order to create a united front of struggle with the Donetsk and Lugansk republics. That is the most so far rich Ukrainian, in fact, declared war on us. How to answer?

- Outsourcing, re-registration of large business enterprises, changes in the tax system are inevitable. It is too early to say what specific forms it will take, but those who work honestly and honestly pay taxes may not worry about their business. As for Akhmetov ... he doesn’t make contact, he even refused to meet with the UN representative. But what is happening in his enterprises in Mariupol, his non-recognition of the results of the 11 May referendum, the statement about the decentralization of power and the European choice of Ukraine - all this causes many questions to the people. Akhmetov assured us that he was "from the flesh and blood of Donbass." If so, then 89,7% supported the independence of the DNI. What kind of federalization / decentralization within Ukraine does he say? Is he with us or against us? We hope for his prudence, while he still has a chance ...

-St. 55 of our Constitution provides for the possibility of joining another federal state. You appealed to Russia, which asked "to consider the issue of the entry of the Donetsk People's Republic into the Russian Federation." What is the reaction of the citizens of the DPR and why is the Kremlin silent?

-This is done primarily to identify the reaction of citizens of the republic to the possibility of joining Russia. We were convinced: the dominant desire of fellow citizens is to be part of the Russian Federation. I emphasize that we are talking about the appeal, and not about the official appeal. We will receive an official response after an official appeal to the Russian authorities, and Russian Foreign Minister Sergey Lavrov spoke about this. We are preparing the relevant documents.

Interviewed by Gennady Dubovoy, editor of the official newspaper of the DPR "Voice of the People"

Ctrl Enter
Noticed oshЫbku Highlight text and press. Ctrl + Enter
We are
Semyon Semenchenko: from the ordinary swindler to the living legendList of destroyed the largest and most high-tech enterprises
Military Reviewin Yandex News
Military Reviewin Google News
83 comments
Information
Dear reader, to leave comments on the publication, you must sign in.