20 May 2014
13
In the program of development of astronautics, new items may appear, in accordance with which the industry will create a new launch vehicle and engine for it. According to Russian media reports, the Samara TsSKB Progress prepared a package of documents relating to a promising carrier rocket of the super heavy class. In the future, this rocket may be used to deliver various spacecraft to the moon. 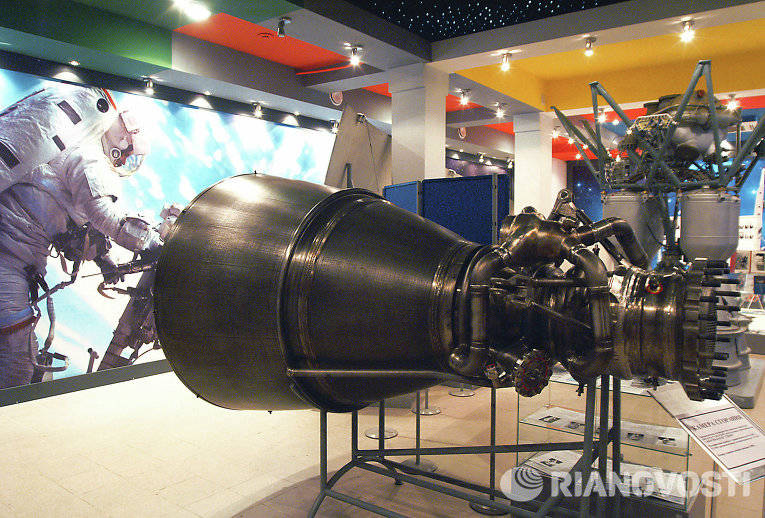 According to Izvestia, with reference to the documentation of TsSKB Progress, the project proposed to Roskosmos implies the creation of not only a launch vehicle, but also a promising engine for it. To achieve high performance, the new super-heavy rocket must be equipped with liquid engines using liquefied natural gas (LNG) fuel pair and liquid oxygen. The proposed fuel has some advantages over currently used kerosene, which can positively affect the operation of rocket technology.

The main advantages of LNG are the comparative simplicity of mining and manufacturing and, as a result, lower cost. In addition, liquefied natural gas compared to kerosene has a wider raw material base. Taking into account the situation in the field of rocket fuel, cheapness and resource base are of great importance. Izvestia notes that in the submitted documents TsSKB Progress describes the prospects for various types of rocket fuel. For example, earlier Soviet and Russian rockets used kerosene obtained from the oil of the Anastasievsko-Troitskoye field (Krasnodar Territory). Deposits are depleted over time, due to which rockets have to be filled with fuel obtained by mixing several types of kerosene. In the future, such a shortage of raw materials will only increase.

An engine that uses fuel vapor LNG-liquid oxygen will be created only in a fairly distant future. Therefore, the period of active exploitation of missiles with a similar power plant may come at a time when oil fields will be depleted, which will affect the cost of kerosene. Thus, liquefied natural gas will be the most efficient fuel in terms of efficiency.

At the same time, LNG makes it possible to reduce the cost of launches now, at current fuel prices. In the future, when using LNG and liquid oxygen, it is possible to reduce the cost of starting 1,5-2 times in comparison with the kerosene-oxygen fuel pair. In addition, liquefied natural gas can be a fuel for reusable rocket engines. In this case, the procedure for cleaning the engine in preparation for the new flight is simplified as much as possible: it is enough to evaporate the remaining liquefied gas.

It should be noted that liquefied natural gas and liquefied methane have long been interested in designers of rocket engines. In comparison with the currently used fuels, LNG and methane allow to achieve higher performance. Nevertheless, both LNG and methane have not yet reached active operation. The main reason for this is the specific characteristics of these types of fuel, as well as their combination with cost.

It is known that an engine using LNG and liquid oxygen has a greater specific impulse compared to a power plant using kerosene. However, methane-based fuels are less dense than kerosene. As a result, the rocket needs a larger fuel tank, which affects its size and starting mass. Ultimately, a rocket with engines operating on LNG or methane has no significant advantages over the "kerosene" one that would allow it to find its place in the space program.

In addition, the economic benefit from the use of alternative fuels is not always appropriate. Izvestia cites the words of Corresponding Member of the Russian Academy of Cosmonautics. Tsiolkovsky A. Ionin. According to the specialist, only a fraction of a percent of the total cost of the launch is spent on the purchase of fuel. In this case, the savings are not too big. Similarly, the situation with the environmental aspects: A. Ionin notes that rockets fly too rarely to have a noticeable impact on the environmental situation.

However, studies of promising rocket engines are underway, moreover, they began a long time ago. Since the early eighties, NPO Energomash has been exploring promising power plants for launch vehicles, including those with engines using liquefied methane and liquid oxygen. According to some information, currently NPO “Energomash” is engaged in the study of the technical appearance of a new light-carrier rocket. The first stage of this rocket can get a promising single-chamber liquid engine using a methane-oxygen fuel pair that can develop thrust to 200 tons.

The exact prospects of the proposed launch vehicle and engine using LNG are not clear. Officials "Roskosmos" still did not comment on the proposal. The documentation is currently undergoing examination. In this regard, it is too early to talk about the timing of the start and completion of work, as well as the time of the first launches of promising missiles. Apparently, active design work on the new project will begin only after a few years, and carrying out all its phases will require at least 10-12 years. Thus, the operation of the new super-heavy launch vehicle with the engine of the new system can begin no earlier than the second half of the twenties.

Ctrl Enter
Noticed oshЫbku Highlight text and press. Ctrl + Enter
We are
LNG for LREIn Russia, create a super-heavy rocket with an eye on the moon and Mars
Military Reviewin Yandex News
Military Reviewin Google News
13 comments
Information
Dear reader, to leave comments on the publication, you must sign in.