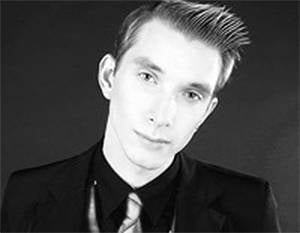 Most recently, I received a letter from a cadet from the Bohun Military School. To make it easier for the Russian reader to navigate - we are talking about the Suvorov School on Lesia Ukrainka Boulevard, and the name of Cossack Besperer Ivan Bohun was named in 1998.


So, in the letter I read the following lines: “I will cut all of you, pro-Russian traitors. And it's not a joke! I hate the ferocious of you - all those who support the course of the enslavers of my land. ”

Such letters are not uncommon. From time to time, we get them from almost everyone who dares to write, speak and think in the language of "antimaydana."

The young man did not hide the name. Of course, I was curious. I made some inquiries. On the page on the social network was posted genuine история his "transformation".

Here is this guy in April 2013-th: smiling and cheerful, at some celebration, in a warm family circle. But in the summer of the same year, he was on the seas, with his girlfriend, surrounded by fellow schoolmates. All the guys are like from the picture: merry and radiant.

But then it is already late autumn. There is no trace of the former smile. In the gloomy November snapshot - burdened with some new idea, agitated cadets with round cleans stand in an embrace with a famous psychopathic deputy, a member of the radical party.

The hairstyle of our cadet has also changed. Instead of the usual sport “brush”, a Cossack Oseledez is now sliding down his forehead ...

Further images do not require comments. They can be covered by a single group: "from the life of the Bandera sect ...". I will only add that in the next-to-last photo, our hero is already in full swing with her like-minded people.

The trouble is not that burned down the old post office. And it’s not even the fact that the modern center of Kiev is solid ruins, furnished with some sort of landfill, sub-fence elements, no ...

The bastards who started this catastrophic act, along with the architecture, crippled the immature teenage heads. And now many young men, overwhelmed by a bloodthirsty ideology, have been sentenced to march for life under the Bandera flags ...

It is probably interesting for the Russian reader to know what post-revolutionary Kiev is like.

Weeks earlier, in a matter of meters from the legendary Bolshevik factory, which was covered with bullet marks from the time of the German bombing, now abandoned, but actively offered for rent, a flash mob was organized in support of the Right Sector.

Under a single red-black banner, painful activists acted well done. According to the external description of exactly the same as our cadet. They were incited by some squeaky, vain "tenor". Teenagers thundered on the team: “Glory to Ukraine! Glory to heroes! Death to the separatists and invaders! ”

Many passers-by stopped and filmed them. Some stopped to “rub” in the line, to show their support.

Such actions are not uncommon. They wander from one corner of the city to another. By the way, you can replenish the brave ranks of the "pravoseks" right on the spot. Phones for recording are freely available, show off on business cards.

And here in Kiev and the region such phenomenon as collective persecution is now in fashion. My good friend of Sevastopol in April, when it could still be done, decided to visit relatives in the White Church.

An over-the-top solution! Close people turned fierce haters. Three days of attacks - more southerner could not bear. She literally had to flee. They attributed "sovok promiscuity." Caught in the inclinations of "terrorist" and "separatist" nature. Accused of non-patriotism ...

"Peck" and in the workplace. If, God forbid, a “white crow” is found in the collective - a person with an opinion contrary to the “Maidan” opinion of the collective - he will immediately be declared a “capital lustration”.

In Kiev, the sirens of ambulances are especially alarming. The number of incomprehensible police officers has increased. Many of them are attached to the form of tiny icons, decorated in the best traditions of the UPA.

The eyes of these servants of order are not at all decent and even boorish. All wander the streets, powerfully waving their batons. They speak on ominous surzhik - obviously not Kiev. I believe that they are called upon to ensure the “peace” and “stability” of the regime of the Hunt before the fascist elections ...

One thing is clear - the city-hero Kiev will never be the same. And many will do everything to ensure that he is not mentioned at all in the future as a “hero”. And few others will feel like outcasts and strangers here ...

Summing up, I would like to speak, perhaps, on behalf of those few "outsiders". I am ashamed. Including before the people living in fraternal Russia.

It is a shame for the shame that has befallen my country, my hometown. The discord that has come to our homes will not subside and will not dissipate with time. Ukrainian tragedy is a dark spot in the history of Slavic society.

Ctrl Enter
Noticed oshЫbku Highlight text and press. Ctrl + Enter
We are
About Stalin and KhrushchevWhat you didn't want to know about England
Military Reviewin Yandex News
Military Reviewin Google News
36 comments
Information
Dear reader, to leave comments on the publication, you must sign in.