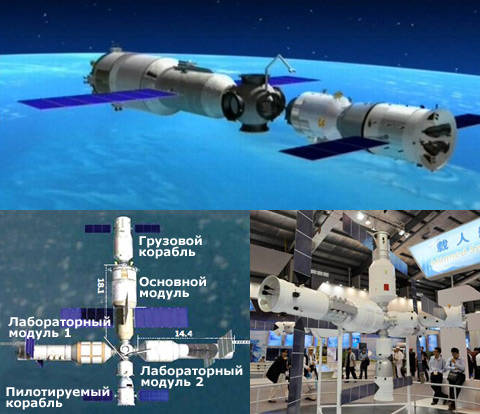 At the Pentagon, they are looking at the space program of China with more and more concern. Thus, the first half of the year of the global national orbital station (module Tiangong-2011) is planned for Beijing at the second half of the year. To do this, and create a spaceship Shenzhou-1.

In total, China is going to launch 4 stations, this will be the basis for the development of manned cosmonautics in the PRC; at present, the Chinese are expanding their squad of Taekonauts (this is how astronauts are called in China), 21 is already ready. They are planning to complete the assembly by 2020, in the 2012, two manned missions will be sent to the module, each with three people. In 2013 and 2015, they are planning to launch Tiangong 2 and Tiangong 3 (“2,3 Heavenly Palace”). In addition, they plan to develop heavier launch vehicles and build another space center in Hainan Province.

After the completion of the Heavenly Palace, Beijing plans to focus on the lunar program and on the exploration of Mars. Washington is worried that the construction of a space station could dramatically increase Chinese military capabilities in space and lead to the militarization of space. Although they themselves began it. American experts believe that the Chinese will be able to use space-launched platforms not only for defense programs, but also for developing offensive capabilities. China in its space program consistently repeats the achievements of the Soviet Union and the United States of America.

- With the 1970 of the year in China, the first manned flight training program began. But at that time they could not build a launch vehicle and a spacecraft in China. In 1992, the program of development of manned space flight was resumed, they began to create a manned spacecraft (it will largely repeat the Soviet spacecraft "Soyuz").

- The National Space Administration of China was established in 1993 year.

- From the 1999 year to the 2003 year, four unmanned test flights of the Shenzhou spacecraft (“Magic Shuttleboat”) were made. October 15 2003 of the year "Shenzhou-5" carried out the first manned space flight of China, on board was PLA Air Force Colonel Yang Liwei. China became the third power of the planet, which was able to carry out a manned flight into space.

- 12-16 in October 2005 of the year "Shenzhou-6" with two taikonaut (Fei Junlong and Not Haisheng) made a second manned flight.

- During the flight “Shenzhou-7”, September 2008, the Chinese astronaut will make the first spacewalk, on 15 minutes.

- Preparations are underway for the construction of a space station, the completion is 2020 year. The Chinese station is identical to the Soviet project "Salute"

It can be concluded that the People's Republic of China repeats the program of the USSR, largely due to its technologies, it is becoming a leader in space exploration. But we are now in stagnation, even degraded in a number of areas, and the Chinese are consistently developing.

Along with the peace program in China, the military significance of the cosmos is not forgotten. For the first time, the Chinese military tested anti-satellite 11 in January for 2007. weapon on his old meteo-satellite "Fengyun-1C". Beijing has shown all the world its ability to destroy space objects in low orbit. After that, Washington and Beijing exchanged several statements. Back in 2006, Washington declared its monopoly right to prevent other countries from militarizing space, although he himself conducted military space programs. Condemned China and other countries - Japan, Australia, South Korea, England, Canada. Although Beijing has assured that its programs are not directed against anyone.

In addition to the development of anti-satellite missiles, including air-based, in China, there are several other military-space value programs: the "blinding" of spacecraft by a ground-based laser; analogue of the American unmanned orbiter X-37B; there is a possibility that the space platforms of the PRC will serve not only research purposes.

It’s high time for the Russian Federation to restore the space programs established in the Soviet Union. So far, our space program is a pale similarity to the Union program. In addition, Washington has long broken its promises not to militarize space, it is catching up with China. The development of space reserves of the USSR can become for the Russian Federation one of the “locomotives” that will help get out of the already 20-year “hibernation”.