20 May 2014
46
The son of US Vice President Joe Biden recently joined the Board of Directors of a gas producing company in Ukraine, Burisma Holdings. The appointment of Robert Hunter Biden for the post is not confirmed by any of the "unnamed sources", but by the State Department. It becomes clear what kind of democracy is preparing to build on the independence of Washington. 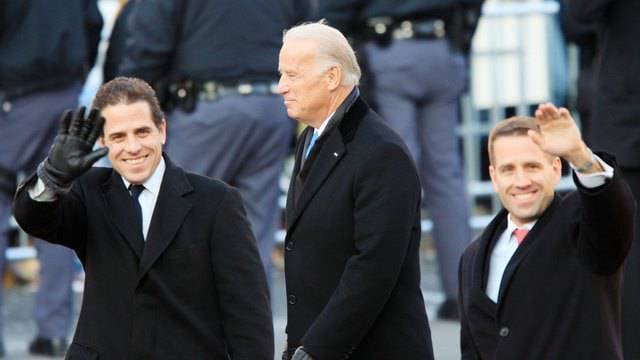 How is the European edition IA "REGNUM"According to official data, Biden Jr. will deal with the legal unit and will represent the company in international organizations.

Here's how Biden's son commented on his appointment: “The Burisma Holdings track record in the field of innovation and leading positions in the field of natural gas production can become a powerful driver for the formation of a strong Ukrainian economy. I think my assistance in matters of transparency, corporate governance and international development can benefit the economy and the people of Ukraine. ”

“The fact that many US state dwellers or their closest relatives quickly get business shares in all countries where the American occupying forces are invading has become a habit since the days of the Iraqi wars and even the destruction of Yugoslavia. So, ex-Secretary of State Madeleine Albright has a business in “independent Kosovo”, and a half-secret one. Joe Biden's predecessor as vice-president of the United States, Dick Cheney, and his family settled in Iraq, it is quite clear in which areas of business. Now it is the turn of the Biden family. Moreover, the US State Department does not see a “conflict of interest” in the work of Biden’s son in Ukraine after the coup d'état. The US State Department is not worried about how Robert Hunter Biden, the son of the US Vice President, will be accepted on the board of directors of the Ukrainian gas company, because he acts as a “private person,” said State Department spokesman Jen Psaki.

Thus, one of the main guardians of Ukraine appeared on the horizon.

IA "REGNUM" reminds that recently, in April, Russian Foreign Minister Sergei Lavrov reported that Joe Biden, at a meeting with the Ukrainian leadership in Kiev, was sitting on the spot of the head of state.

The site Burisma Holdings reported that the holding owns a license to develop fields located in the Dnipro-Donetsk, Azov-Kuban and Carpathian oil and gas basins.

Nikolay Zlochevsky, ex-minister of ecology of Ukraine, is a member of the directors with Biden-son. Another involved in the case is “family friend of US Secretary of State Kerry,” namely Devon Archer. The ex-president of Poland, Aleksander Kwasniewski, is also on the board, the agency notes. The company itself is not Ukrainian at all, as they say about it, but has a Cyprus registration.

Burisma Holdings received the right to develop shale gas deposits on the independent gas. Moreover, one of the potential fields is the Yuzovskaya Platform in the area of ​​Slavyansk and Kramatorsk, around which the “antiterrorist operation” is taking place.

“Now let's look again at the Ukrainian security forces, where civilians are shot and killed, including civilians. This is all the same Slavyansk and Kramatorsk ... Thus, the “American troops” on the board of directors of the firm “Burisma Holdings” in the person of Robert Hunter Biden, Devon Archer, who followed almost immediately after the head of the CIA secretly visited Kiev and ordered to begin to force operations against Donbass, and there is a reason that the Ukrainian Nazis grew bolder and embarked on the physical destruction of their opponents in the east of Ukraine. ”

An article on this topic appeared in the online edition. "Buzz Feed". Max Seddon, who visited Donetsk, said that the company's Cypriot documents indicate: Joe Biden's son joined the board of directors of Burisma Holdings as early as 18 of April. The journalist tried to take comments from Hunter Biden's assistants about the appointment, but he was refused under the guise of the fact that “no in the workplace”. Press secretary Joe Biden Kendra Barkoff also declined to comment on the appointment of the vice-president’s son.

The journalist rummaged in some open and half-open sources and found out the following.

Burisma is wholly owned by a Cyprus offshore company, Brociti Investments Limited. This company is owned by Mykola Zlochevsky, under Yanukovych, who served as Minister of Energy and Deputy Chairman of the National Security Council of Ukraine.

The author also quotes Putin’s press secretary, Dmitry Peskov. He told Buzz Feed that Russia does not see a conflict of interest in Joe Biden’s actions to separate Ukraine from Russian gas, which is about 60% of the country's total energy resources, while his son works in the gas industry of Ukraine. Peskov added: “In any case, everyone knows that there is no gas in Ukraine. Gas in Ukraine is Russian. ”

So, after the presidential election in Ukraine, the newest phase of gas diversification will start, which (no doubt) will be held under the motto of “independence” of energy supply from Russia.

What will make the slate processors independent, God knows. In any case, in Poland, shale gas is not in a hurry to produce something. It is interesting, of course, what Alexander Kwasniewski, who is present at the Burisma Holdings council, thinks about this ... Money does not smell, eh?

Observed and commented on Oleg Chuvakin
- especially for topwar.ru
Ctrl Enter
Noticed oshЫbku Highlight text and press. Ctrl + Enter
We are
Results of the week. “We won't give you the keys! We're not Pinocchio! ”Ministry of Defense Innovation Day
Military Reviewin Yandex News
Military Reviewin Google News
46 comments
Information
Dear reader, to leave comments on the publication, you must to register.