20 May 2014
7
World War II was the impetus for the rapid development of all types of weapons. This applies to armor technology, rocket technology and of course the aircraft. However, after the end of hostilities, development did not stop, although it slowed down a bit. During this period, a large number of various machines were developed, and among them were quite a few with original designs. Among them, the XB-51 bomber developed by the American company Glenn L. Martin Company is particularly notable. The most remarkable design feature of this machine is the number and location of the engines: two engines were placed under the nose and one in the tail.

The aircraft Martin Model 234 (designation of the machine) was developed under the new requirements of the Air Force of the United States Army, put forward on the bomber direct support to the troops after the end of the Second World War. The new aircraft was supposed to combine powerful rifle armament, high speed of flight and a significant bomb load. It was assumed that the bomber would have a powerful cannon battery in the nose of the fuselage, the maximum bomb load would be more than 5450 kg (12000 pounds), and high near-sonic speed would be the only means of protection against the attack of enemy aircraft. In this regard, such an aircraft was supposed to be equipped with jet engines. The machine was designed for action from medium and low altitudes. The new machine was given the "military" designation XA-45 (A - attack aircraft). During the design, the designers used nearly fifteen years of experience with the front-line bomber company Maryland, B-10, B-26 Marauder and Baltimore. The desire to meet the requirements during the design of the XB-51 forced the company to make such decisions that this aircraft can certainly be considered one of the most original. After finalizing the aircraft began to be classified as an average bomber. Martin received an order for the production of two experienced XB-51 bombers.

Martin XB-51 had a rather original design, as well as some unusual features, including the location and number of turbojet engines. It should also be noted that the XB-51 was designed to perform tasks that were also assigned to the Martin B-57В bomber ("Canberra"), the English version of which was simultaneously developed with the XB-51 bomber. However, the similarity of the machines consisted only in the number of crew members, otherwise the aircraft were the exact opposite.

The aircraft is a cantilevered midplane with a swept wing and tail. The first calculations showed that the bomber's take-off weight was approaching 36 tons. It was decided to place the payload, which the 24 500-pound bombs were supposed to place in the extended bomb bay, without carrying it to external nodes. Three General Electric J47-GE-7 engines (thrust each 2360 kg, mounted on the first prototype) or J47-GE-13 (thrust each 2640 kg, on the second prototype) served as the power plant. Two engines were mounted on pylons on opposite sides of the fuselage, the third engine was mounted in the tail section. Such a number of engines was caused by the need to achieve the desired characteristics of thrust - the two engines were clearly not enough, and when installing four, it became redundant. Placing three engines in the rear fuselage would have caused the bomb bay to move forward from the wing, which would lead to a significant runoff of the alignments after the bombs dropped. The shift of alignments was necessary to compensate for by increasing the area of ​​horizontal tail, and this significantly increased the mass. Therefore, it was decided to move the two engines forward, and leave one in the rear fuselage.

In addition, the engines hung under the wings interfered with a thin profile. In the area of ​​possible suspension, the construction height of the wing did not guarantee the use of materials of that time to obtain a sufficiently strong structure. In addition to the main engines of the power plant, it was possible to install jet accelerators for takeoff. The XB-51 bombers were equipped with a braking parachute.

The tandem chassis layout for Martin was not new: it was first used in an experimental modification of the B-26 bomber. In addition to a number of advantages, it also had some disadvantages, the main of which was the difficulty of sharply increasing the pitch angle during the takeoff run due to the distant location behind the center of gravity of the rear support. In those years, this deficiency was overcome in several ways: some companies extended the front strut, exposing the aircraft to the required angle of attack (the aerodynamic resistance increased during the takeoff run); others made the front strut telescopically extendable when the breakaway speed was reached (caused significant weight and structural costs). Some of the developers solved the problem, as they say, “head on” - by increasing the area of ​​horizontal tail. The company Martin found its own way - it created a wing with a variable angle of installation during the take-off process: the wing (sweep along the leading edge of the 34 ') rotated around an axis that lay in the plane of the rear spar. The wing had a negative transverse “V” angle and was fitted with slats and flaps that took most of the span. For the transverse control, the interceptors located on the upper surface and the small ailerons at the ends of the wing served. At low speeds, flaps were also used for lateral control, which have the possibility of differential extension. Flap control and wing angle control are mechanically connected.

The use of such a wing made it possible to take off / land practically in the horizontal position of the fuselage, evenly distributing the load on the main landing gear. Due to the speed of the mechanism for changing the installation angle, the maneuverability has improved during the transition after dropping bombs to climb, leaving when landing on a second circle, and the like.

The fuselage of the aircraft was carried out according to the scheme of semi-monocoque. It was assumed that a battery of eight 20-mm or four 75-mm guns would be installed in the nose. Behind the weapons compartment was the crew cabin. The main objectives of the Martin XB-51 bomber were the destruction of enemy air defenses and artillery, as well as tactical support for US ground and / or naval forces. To perform these tasks, it is enough to have a pilot member of the crew - however, the second crew member is necessary for the implementation of radio navigation bombardment. Both crew members are placed in an air-conditioned pressurized cabin located in front of the fuselage. This placement allowed equipping both workstations with ejection seats. The pilot was located under a fighter-type lantern, the navigator-radio operator was below the pilot, there was a special porthole on the starboard side. Between the cockpit and the tail of the engine compartment is a bomb bay.

The first flight of the first prototype was carried out 28 October 1949 year. This vehicle had a tail number 46-685. The long cigar-shaped form of the fuselage was the reason why the bomber was immediately given the nickname "Flying Cigar" ("Flying Cigar"). The second prototype, built in the spring of 1950 of the year and lifted into the air of 17 on April of 1950 of the year with the hull number 46-686, was painted according to the “Glossy Sea Blue” standard for the American Navy. The machine carried the designation of the Second Squadron heavy attack aircraft "Royal Rampants".

In flight tests, the Martin XB-51 bomber proved to be quite good, and although there were failures and accidents from time to time, the pilots spoke about it quite well. But in the 1951 year, the US Air Force changed the requirements for the front bomber, in connection with which they corresponded to English English "Canberra" rather than Martin XB-51. 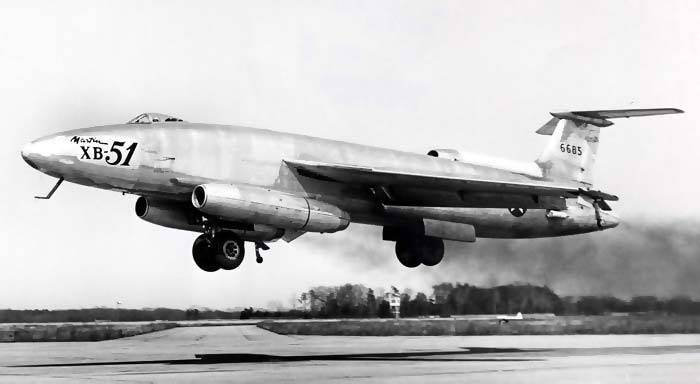 The project was closed, a license for an English bomber was acquired, and ironically, this production was established precisely at the facilities of the Martin company. The engineers of the company thoroughly changed the import development, and in the mass production of the machine began under the designation B-57. Both prototypes of the XB-51 bomber continued test flights, taking part in a variety of research programs.

9 May 1952 of the year when maneuvering at low altitude crashed the second prototype. The first machine continued to work in research programs, took part in the filming of the movie "Toward the Unknown" where he depicted the XF-120 fighter "Gilbert fighter". Successful flights continued until March 25 1956, when the plane crashed during takeoff. Commissions to investigate accidents with XB-51 bombers concluded that in both cases the cause was pilot error.