Resisting Venezuela on the margins of the American Empire 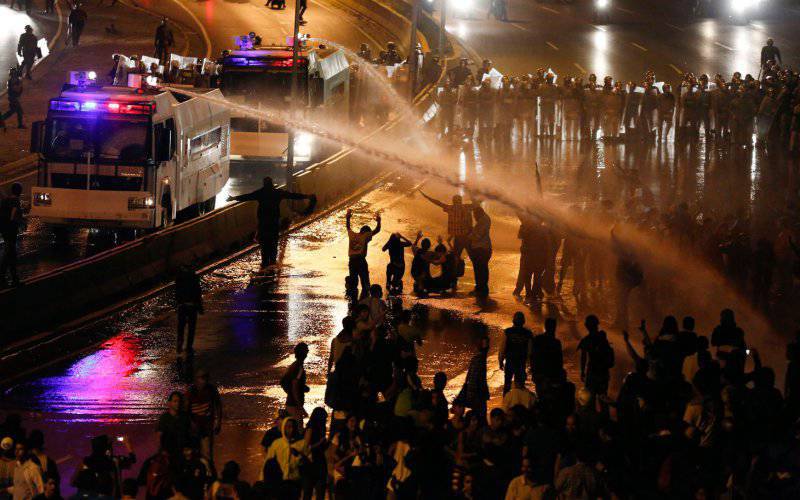 After the experiment with the overthrow of power in Ukraine, the American intelligence services switched to Venezuela: while Washington’s attention was focused on Eastern Europe and Western Asia, he was losing ground in the back of his empire - in Latin America. The fact is that after the death of Hugo Chávez, his successor, the socialist Nicolas Maduro, became the president of Venezuela in 2013, which the White House is not satisfied with. From the very beginning, the Venezuelan opposition, with the support of the CIA, opposed such an outcome of the elections and organized protests, and now, convinced of the senselessness of the rallies, turned to terror tactics - just as it did in Kiev.

By the way, the Kiev version of the overthrow of power was not the only scenario prepared by the CIA specifically for Venezuela: Plan A suggested the overthrow of Maduro in exactly the same way as it was done in September 1973 of Chile. Then the rebellious generals used the armed forces to destroy the legitimate government of Salvador Allende. The military received partial support from the population, which, by the way, paid for the betrayal. Although not everything was so clear: Allende was supported by many Chileans. The new leader of the country, Augusto Pinochet, pursued them, sent them to jail, or simply killed them.

In Venezuela, the Chilean scenario of a rapid coup d'état failed. Riots and armed insurrections were quickly put down by the police. But there was an option "B" - a creeping coup used to overthrow Viktor Yanukovich in Ukraine. It is his implementation in the near future and will be carried out.

The conspirators in every way trying to provoke discontent among the inhabitants of Venezuela. It is both psychological pressure - the construction of fictitious barricades, the burning of tires - and terrorist actions - riots, attacks on state institutions, attempts on the lives of policemen. However, Nicolas Maduro steadily keeps, and, unlike his Ukrainian counterpart, he does not go to negotiations with the militants. This upsets the conspirators' plans: they did not expect to face a total rejection of their ideas. The president’s support in society is quite high, and the fight against oppositional terror only rallied people who wanted order.

Protests gradually fade away. Venezuelan special services hunt for their organizers: for example, a few days ago, in San Cristóbal, someone named Timing Leininger, a US citizen, was arrested. A whole arsenal was found in his apartment. weapons - Two pistols, three rifles, cartridges and several camouflage kits were stored in the cache. The detainee is accused of preparing terrorist acts, now under investigation.

Mr. Leininger is not the only “victim” of Maduro. Recently, in Venezuela, about 60 foreigners were arrested on suspicion of subversion, all with weapons. It is significant that all the saboteurs were caught in those regions of the republic that are considered by the CIA as the most susceptible to anti-government uprisings. It is obvious that the agents were tasked to carry out provocations, inclining the population to the beginning of the mutinies.

In the undeclared war against Venezuela involved saboteurs from many Latin American republics. Their CIA is recruiting in Mexico, Honduras, Panama, Colombia. By the way, the latter is used as a springboard for the onslaught of bandits on Venezuela: thanks to the difficult landscape, the security forces, together with the participants of the militias, cross the border without much difficulty. Smugglers help them - the mafia knows all the trails, and also has established contacts with the staff of the Venezuelan Customs and Border Guard Service.

Quite interesting characters have recently begun to penetrate into Venezuela - members of drug cartels, long sought by Interpol. Obviously, they are not at all mixed up in the political background, but they have economic interests and the goal is to establish a “business”. The CIA treats this with understanding, they do not interfere with the drug mafia to “work” - as always, the American special services violate the norms of international law, and act in the way they see fit. All in order to poison the lives of millions of Venezuelans and personally Nicholas Maduro!

Mafia and mercenaries from different parts of the world launched a massive campaign of terror in Venezuela, directed against officials, party functionaries, show business stars, cultural and art workers. Gangsters deliberately commit assassinations of public people so that acts of intimidation become particularly resonant events. According to the logic of the CIA, the more Venezuelan citizens hear about deaths, the sooner they will realize that the government is incapable and cannot ensure their safety.

Within the framework of this psychological warfare, such methods as tire burning and the construction of barricades are used. By themselves, burning tires pose no threat to anyone, but the black smoke creeping over the center of the city makes it tense. The same applies to the barricades: many of them can be easily destroyed with the help of heavy machinery, but the fact of the appearance of a blocked road gives civilians the impression that the authorities do not control what is happening on the streets, and lawlessness is happening on the roads - everyone can do something that he wants, and will not incur punishment for it.

Similar techniques were used in Kiev, it suffices to recall the barricade of burning tires on the Grushevskogo street. Absolutely meaningless from a strategic point of view, it was located in the center of the city for a month, irritating bystanders, and at the same time served to create beautiful pictures in the media.

The rear does not expose!

In addition to psychological pressure, there is the elimination of key figures of the Venezuelan resistance, as well as prominent cultural figures and politicians. The fact that the operation for their "shooting" is carried out under the strict control of foreign intelligence services, is evidenced by the fact that the militants commit attacks mainly on members of the security bloc. Thus, Eliecer Otays, a prominent politician and prominent supporter of the Bolivarian revolution, became the victim of terrorists. After Hugo Chávez came to power, he headed the counterintelligence service for some time. The ambush on him was prepared with skill: Otais was tracked down on a deserted road, taken hostage, tortured and finally killed.

It is believed that it was Otaysa who organized the groups of resistance to American aggression. If this is so, then the motives for the murder are clear: to “decapitate” the patriotic Venezuelans, to sow panic and distrust in their ranks. In addition to the former head of the security service, several DIS counterintelligence officers suffered from the hands of terrorists, whose duties include the protection of strategically important objects and the neutralization of enemy agents. For example, DIS recently exposed the plot of Air Force generals who wanted to overthrow Nicolas Maduro. Was this the Chilean scenario prepared for Venezuela in the gloomy offices of the American special services?

All of the officers involved in the conspiracy were trained in the United States, and after the Bolivarian Revolution maintained secret ties with the American attache in Colombia. Also in the office of the President of Venezuela was exposed one of the employees recruited by the CIA. She, through her relative, notified the American embassy about the movements of Nicolas Maduro and people close to him.

With each new conspiracy unmasked, the mastery of Venezuelan counterintelligence is growing. In the course of operations, the special services receive an excellent experience in countering terrorists and conspirators. Channels of importation of weapons, money and drugs into the country have already been established, the enemy’s agent network has been discovered. In the near future, Venezuela is waiting for a big purge - it is important to get rid of enemies who are eager to plunge the country into the darkness of civil confrontation.

Effective resistance to an external enemy will be possible only after the internal enemy is defeated - a mass of traitors who are ready to destroy their own country for the sake of glory and privilege. Ukraine could not win on the domestic front; Well, Venezuela must take into account the sad experience of this victim of American expansionism, and resist to the last - at any price.