American expedition 1863 of the year

19 May 2014
7
In the fall of 1863, squadrons of Russian ships appeared off the coast of America (USA - North American United States). Americans seldom recall this incident, moreover, many do not know anything about its significance. Meanwhile, the preservation of its independence, the United States owes much to the Russian imperial the fleet.
In order to understand the true causes of the American expedition of Russian ships, one should pay attention to the events in Europe at that time. 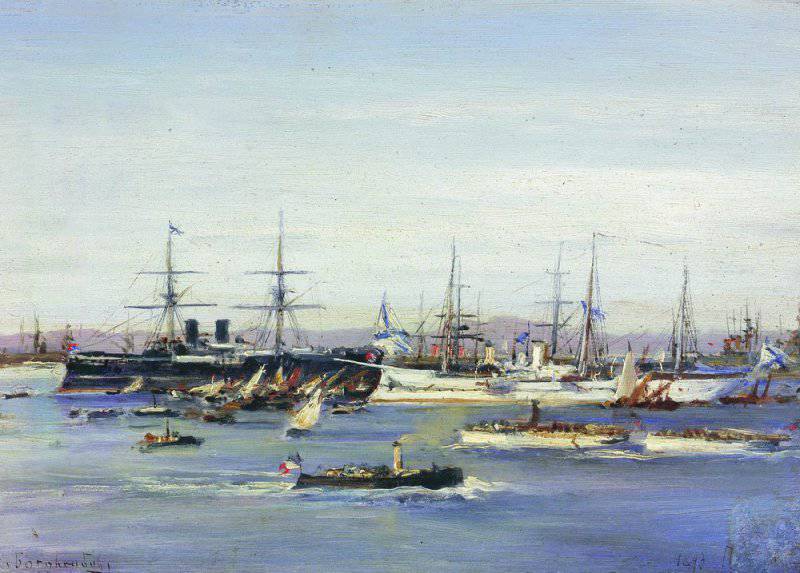 22 January 1863, a rebellion broke out in Warsaw, and "for two months all Russian Poland was enveloped in its flames." In April, England, France, and Austria presented notes to the Russian government, essentially interfering in the internal affairs of the empire. There was a real threat of war with a coalition of the strongest Western powers.

The leaders of the Polish insurgency did not think of anything better than to call for the restoration of a free and independent Poland not within its ethnic borders, but within the middle of the seventeenth century, “from sea to sea”. They seriously declared that the whole of Ukraine (with Kiev), all of Belarus, Smolensk, Lithuania, part of modern Estonia and Latvia (which was once under Polish rule), and the Northern Black Sea Coast should become part of Poland.

As soon as the Russian troops began to suppress the insurgency, the Western powers interceded for the Polish insurgents. Beginnings, of course, England - the stronghold of humanism and democracy on earth. Five years ago, the British army stifled a bloody image of an uprising in India — prisoners were tied to gun muzzles and shots were blown to pieces, the population of entire villages were thrown tied up in a field, and elephants were let through. This was probably not considered an atrocity — but the Poles' suffering was somehow utterly distressing for the British. And England (together with Austria and France that joined it) began to bombard Petersburg with menacing notes, demanding to immediately grant Poland independence in accordance with its requirements (that is, in those very schizophrenic borders - “from sea to sea”).

From Petersburg they firmly answered that they would not tolerate interference in their internal affairs. The three "Polacophical" powers insisted, and in the end their notes turned into the real ultimatums: either Poland would be free, or - war!

The wars in Petersburg, of course, did not want to. Having only Prussia on its side, Russia was put in a very difficult position. In addition to a significant part of the troops engaged in the pacification of the rebellion, the entire Western army had to be prepared in case of complications in Finland and the Caucasus, where there was also intense propaganda by Polish and foreign agitators. The same precautionary measures had to be taken to protect the Russian maritime borders. The difficulty of Russia's position was aggravated by the fact that both in the Baltic Sea and in the Pacific Ocean our fleet was much weaker than the combined Anglo-French naval forces and, in the event of war, all the coasts of Russia opened up for Allied naval operations. In addition, there was a high probability of blocking the Russian fleet in the Baltic Sea, followed by its complete defeat.
It was then that Admiral N.K. Krabbe He offered an excellent way out: in order for the Russian fleet not to die, locked up in the Baltic, it should be put into the ocean. If the war really breaks out, the Russian cruisers, remaining elusive, will be able to very quickly disrupt the sea trade of England, intercepting British civilian ships. In fact, it was proposed to transfer the military fleet to privateering. 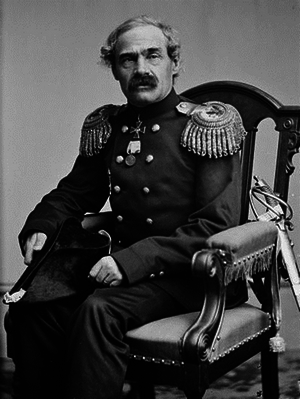 Admiral Krabbe assessed the political significance of the expedition conceived in the sense that Russia was removing the threat from itself, transferring it to its possible adversaries, which completely untied her hands in the Polish cause. Due to the fear of huge losses and a complete breakdown of trade, England should, according to Admiral Krabbe, immediately abandon the joint performance with France. This was supposed to close the Polish question. It was assumed that the French and Austrians, without British support, would not dare to fight against the union of Russia and Prussia. Krabbe's plan found support instantly.

Following the instructions, the squadron ships were to leave the Baltic Sea one by one (except for the Oslyabya frigate, which was marching from the Mediterranean Sea), pass unnoticed by the North Sea and, beating England from the north, concentrate in New York.

On the night of 18 on July 1863 of the year, Rear Admiral SSLesovsky arrived on board the frigate Alexander Nevsky, stationed at Kronstadt raid, and at dawn the ship appeared and went to sea. The Peresvet frigate joined him at Revel, the Varyag and Vityaz corvettes joined the Dago island, and the Artelschik and Krasnaya Gorka screw transports that brought coal to replenish stocks in the Little Belt Strait.

Only in the morning of July 26, when the ships were in marching, did the crew know the purpose of the cruise. Having loaded coal with transports into the sea (for the first time stories Russian fleet refueling warships carried out on the move), the detachment's ships began to move through the straits and secretly entered the North Sea, circled the northern tip of Scotland and went across the Atlantic Ocean, little visited by merchant ships. Saving coal in case of a battle or prolonged windless weather, the detachment’s ships made most of the journey under sail. The cruisers survived two violent storms and a hurricane, but on August 18 fell behind the Almaz, on August 25 the Vityaz and on August 30 the Varyag. On September 5, Alexander Nevsky and Peresvet met Varyag and Vityaz, and 13 arrived together in New York. The laggard Almaz arrived on 29, and the next day the Oslyabya frigate arrived, making its own transition from the Mediterranean. 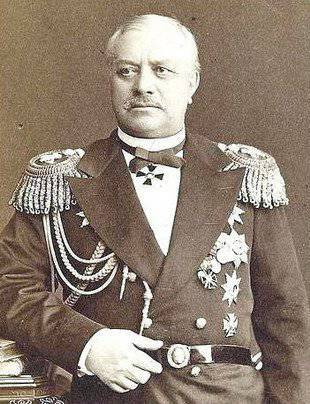 In addition to the threat to the maritime communications of England and France in the event of war, the task of the squadrons was to demonstrate solidarity with the Northern states of America during the civil war against the slave-owning South, supported by England and France. Russian squadrons were not tasked to participate in hostilities against the South. On the contrary, it was prescribed to observe the strictest neutrality. However, the mood of the crews of the ships was on the side of the northerners.

The presence of Russian warships restrained the fleet of southerners from active operations. Some American researchers believe that the Confederates "were warned about the determination of the Russian squadron to help local authorities in repelling the attack" and did not risk attacking San Francisco. 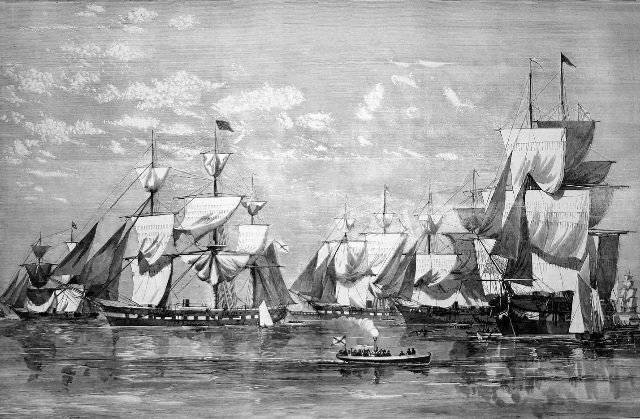 It must be said that the appearance of the Russian ships in New York and San Francisco at the height of the civil war off the coast of America produced a real sensation in the USA. In the fall of 1863, the American newspapers (New York Times, New York Herald, New York Daily Tribune, Daily Alta California, Harper's Weekly, National Intelligencer etc.) were filled with numerous articles, drawings, announcements of ceremonial demonstrations, receptions and dinners in honor of Russian sailors. Never before has Russia, its politics, its role in the world, and especially its relations with the United States, attracted so close attention of the American public.

The sudden appearance of the Russian squadrons in New York and San Francisco became for England a pedagogical slap on the softest point. By that time, the glory of the southern Alabama cruiser, which had practically paralyzed the Atlantic trade of the northerners and demanded 15 combat ships, had already thundered in the world. Five Russian cruisers in the Pacific and six in the Atlantic, consisting of two squadrons, gave a total of eleven potential Alabs, which could not be stopped even by Her Majesty’s fleet. 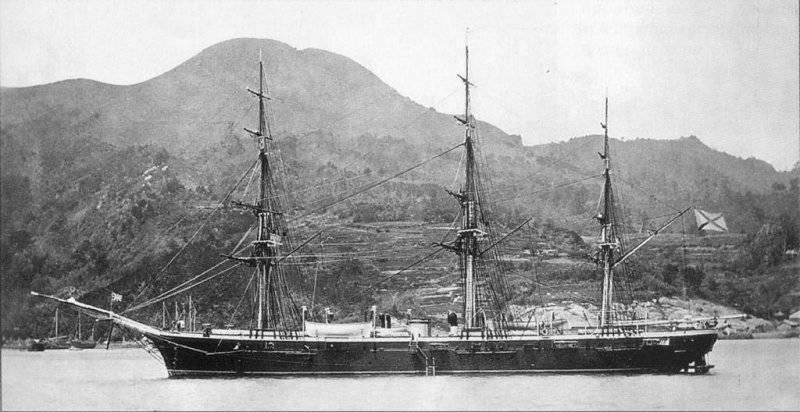 In July, 1864, when the troops of the northerners in America went on the offensive across the front, their victory over the Confederates was designated and the threat of hostilities from England and France disappeared, the Russian squadrons were withdrawn to their homeland. The results of this operation were highly appreciated by the Minister of Foreign Affairs of Russia, Prince A. Gorchakov, and had a strong influence on the development of cruisers as a new class of warships.

The war promised from the “Poleophile trio” did not come: all the terrible ultimatums of England - France - Austria turned out to be a grand bluff. In London, it was understood that if it came to war with Russia, squadrons based in American ports would be able to cause significant damage to Britain’s maritime trade and colonial possessions. This had a restraining influence on English policy towards Russia and the United States. 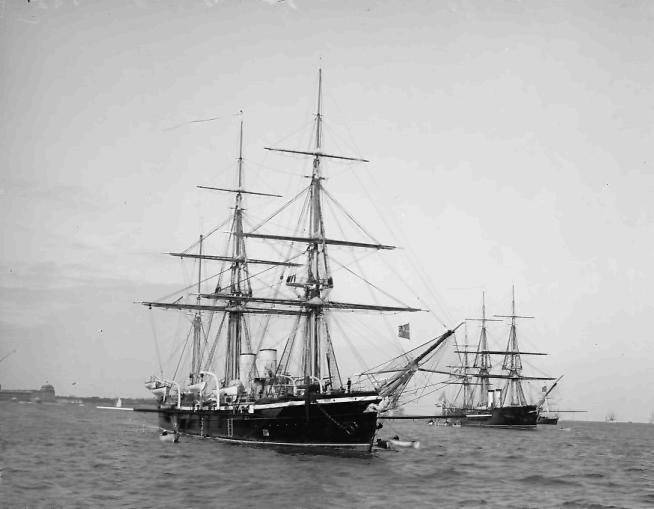 President A. Lincoln praised the presence of Russian squadrons off the coast of the United States as a military factor that led to the failure of Britain and France to intervene in the course of the North-South Civil War. The union of the United States and the Russian Empire posed a great danger to Britain in the future. The creation of this union was a serious miscalculation of British diplomacy. When the squadron sailed home at a farewell dinner, the mayor of Boston said: “The Russian squadron did not bring us weaponsnor war projectiles to suppress the uprising, but she brought with her more than that - a sense of international fraternity, her own moral assistance. ”