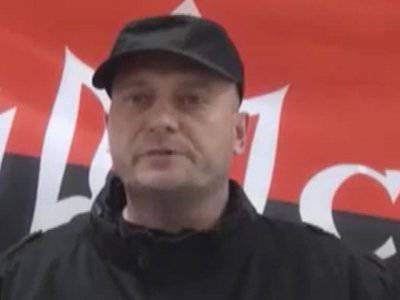 The leader of the radical movement "Right Sector" and the presidential candidate of Ukraine, Dmitry Yarosh, announced the formation of the Donbass-2 battalion, whose task is to wage a large-scale partisan war in eastern Ukraine.


During the election debate, he said that in the east of Ukraine, the special battalion "Donbass-1" had already been created, which included, including, the fighters of the "Right Sector", and the formation of the second such special battalion began, RIA "News“According to Dmitry Yarosh, the volunteer units that are already being formed in the Donbass should unleash a large-scale guerrilla war in the east of Ukraine.

In Russia, a case was initiated against Dmitry Yarosh about participation in battles against Russian soldiers in the Chechen Republic in 1994-1995. His association of radical nationalist organizations, the Right Sector, is associated with the nationalist party Svoboda, which after the change of power in Ukraine is part of the ruling coalition.

Currently, the new authorities in Kiev are conducting a special operation in eastern Ukraine to suppress the protest movement, which arose as a reaction to the change of government that occurred in the country 22 in February after many days of clashes in the center of Kiev and had signs of a coup.

The military operation has already led to dozens of victims. In the Donetsk and Lugansk regions, the people's republics were proclaimed, which after the referendums declared about the status of the regions about their sovereignty.

Ctrl Enter
Noticed oshЫbku Highlight text and press. Ctrl + Enter
We are
The leader of the Ukrainian nationalists Yarosh intends to run for presidentYarosh demanded to give weapons to the units of the "Right Sector"
Military Reviewin Yandex News
Military Reviewin Google News
135 comments
Information
Dear reader, to leave comments on the publication, you must sign in.