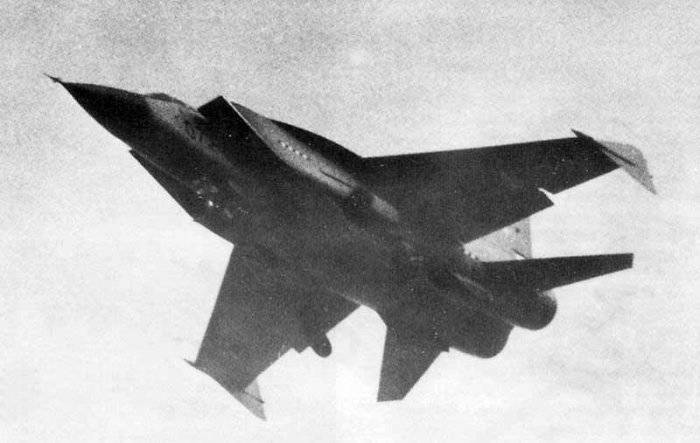 Since 1978, the Vympel Design Bureau has developed an anti-satellite missile equipped with an OBCH, which can be launched from a MiG-31 aircraft. The defeat of the target was probably carried out according to this scheme: the rocket was output to a predetermined height and undermining of the warhead.

In 1986, the OKB MiG began the revision of two MiG-31 fighters for a different composition of weapons. Such a modified aircraft received the designation MiG-31D (there is a designation and MiG-31А) ("product 07"). The product was to carry one large specialized rocket, and the weapons control system was completely redone for it. The grooves under the P-33 were patched. Both prototypes did not have a radar (instead of it there was a 200-kg weight model), the radio transparent nasal fairing was replaced with all-metal, AKU niches for RUR X-NUMX were sewn up by installing a central retractable pylon for the “product”. Planes were single.

The MiG-31D was equipped with surges like on the MiG-31М and large triangular planes at the ends of the wing ("flippers"), similar to those on the prototype MiG-25П. "Fins" served to increase stability in flight when suspended on the outer pylon of a large rocket. The planes received their 071 and 072 tail numbers.

The revision was completed in 1987 year, and in the same year, the board number 072, the carrier of the anti-satellite missile, went out for flight tests by the OKB pilots in Zhukovsky. The first flight and tests conducted AG. Fastovets. The test program lasted for several years, but was suspended at the beginning of the 90-s because of the unclear situation with the advent of the new rocket.

As Russian officials reported in 1992, in the future, testing of this system is quite possible. In August of the same year, a photograph of the MiG-31 interceptor fighter with an anti-satellite missile under the fuselage was published for the first time in Aviation Week and Space Technology magazine.

According to the deputy general designer OKB im. Mikoyan A. Belosvet, with 1997, it began the development of a system for launching spacecraft to near-earth orbits with the help of a converted MiG-31 interceptor. It will be based on the experience gained by the design bureau as a result of experiments on the creation of an anti-satellite MiG-31D fighter. The commercial launch vehicle RN-S with a payload of 40-200 kg will be launched from a flying launcher - the MiG-31D fighter flying at a height of about 17000 m at a speed of 3000 km / h. It should be developed by the Vympel design bureau specializing in the creation of air-to-air SD. The first pilot launch of this PH was expected in 1999-2000.

According to some reports, the Burlak carrier based on the Tu-160 bomber was developed on the basis of an anti-satellite missile.
Ctrl Enter

We are in Yandex Zen
An-12 in Afghanistan
MiG-23 fighters in Afghanistan
2 comments
Information
Dear reader, to leave comments on the publication, you must to register.