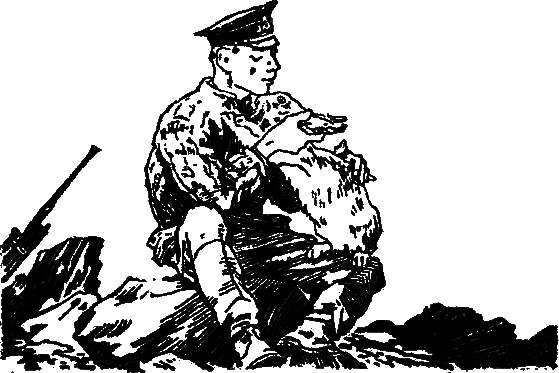 Far to the north, on the very edge of our land, by the cold Barents Sea, the battery of the famous commander Ponochevny stood throughout the war. Heavy guns took refuge in the rocks on the coast - and no German ship could pass with impunity our naval outposts.

The Germans tried to capture this battery more than once. But the gunners of Ponochevny and the enemy were not allowed close to him. The Germans wanted to destroy the outpost - thousands of shells were sent from long-range guns. Our gunners survived, and they themselves responded with such fire to the enemy that the German guns soon became silent - they smashed their well-aimed Ponocherni shells. The Germans see: you can’t take Ponochevny from the sea, you can't break from land. We decided to strike from the air. Day after day the Germans sent air reconnaissance aircraft. They circled over the cliffs with kites, looking for where the Ponochevny cannons hid. And then the big bombers flew in, threw huge bombs from the sky onto the battery.

If we take all the Ponochenny guns and weigh them, and then calculate how many bombs and shells the Germans attacked this piece of land, it will turn out that the entire battery weighed ten times less than the terrible load dropped on it by the enemy ...

I was in those days on the battery Ponochevnogo. The whole coast was blown up by bombs. To get to the rocks, where the guns stood, I had to climb over large funnel pits. Some of these pits were so spacious and deep that in each of them would fit a good circus with an arena and seats for the audience.

A cold wind blew from the sea. He dispersed the fog, and I examined small round lakes at the bottom of huge craters. Batteries of Ponochevnoy squatted by the water and peacefully washed their striped vests. All of them were recently sailors and gently took care of sailor's vests, which they remained in memory of naval service.

I was introduced to Ponochevny. Cheerful, slightly snub-nosed, with cunning eyes, looking from under the visor of a sea cap. As soon as we started talking, the signalman on the rock shouted:

- There is! Breakfast is served. Today breakfast will give hot. Take cover! - Ponochevny said, looking around at the sky.

The sky boomed over us. Twenty-four "Junkers" and several small "Messerschmitts" flew straight to the battery. Behind the rocks, our anti-aircraft guns loudly, pounded. Then thinly squealed the air. We did not have time to get to the shelter - the ground gasped, a high rock not far from us cracked, and the stones squealed over our heads. The hard air hurt me and knocked me to the ground. I climbed under the overhanging cliff and pressed against the stone. I felt like a stone beach was walking under me.

The rough wind of explosions was pushing into my ears and dragging from under the rock. Clinging to the ground, I squeezed my eyes shut.

From one strong and close blast, my eyes opened up themselves, as the windows in the house open during an earthquake. I was about to close my eyes again, when I saw that to my right, very close, in the shade under a large stone, something white, small, oblong was stirring. And with each bomb hit, this small, white, oblong ridiculous jerked and stopped again. Curiosity so dismantled me that I no longer thought about danger, did not hear explosions. I just wanted to know what a strange thing jerks there under the stone. I got closer, looked under the stone and looked at the white hare tail. I wondered: where did he come from? I knew that there were no hares.

The close gap crashed, the tail twitched convulsively, and I squeezed deeper into the crevice of the rock. I was very sympathetic to the tail. I could not see the hare itself. But I guessed that the poor fellow was also uncomfortable, just like me.

There was a last post. And immediately I saw how a large European hare was selected from under the stone slowly, backwards. He got out, put one ear upwards, then picked up another, listened. Then the hare suddenly dryly, fractionally, briefly struck the paws on the ground, as if playing a rebound on the drum, and jumped up to the battery, angrily spinning it with its ears.

The batteries gathered around the commander. Reported the results of anti-aircraft fire. It turns out that while I was studying the Zaikin tail there, anti-aircraft gunners shot down two German bomber. Both fell into the sea. And two more planes began to smoke and immediately turned home. We have bombs on the battery damaged one gun and two soldiers were easily wounded by a splinter. And here I again saw the oblique. The hare, often twitching with the tip of its hunchbacked nose, sniffed the stones, then looked into the caponier, where a heavy weapon was hiding, sat down in a column, folded its front paws on its tummy, looked around and, as if seeing us, headed straight for Ponochevnom. The commander was sitting on a rock. Hare jumped to him, climbed on his knees, rested his front paws on Ponochevny’s chest, reached out and became a mustache with a muzzle rubbing against the commander’s chin. And the commander with both hands stroked his ears, pressed to the back, let them pass through the palms ... Never in my life had I seen the hare to stick so freely with a man. I happened to meet me with a very tame apparition, but it was enough to touch their backs with a palm, and they froze in horror, dropping to the ground. And this one was holding out with the commander of the enlistment.

- Oh, you, Zai-Zich! - said Ponochevny, carefully examining his friend. - Oh, you cheeky beast ... did not win you? Not familiar with our Zai-Zaich? He asked me. - This is a scout for me from the mainland. The lousy was, anemic, so seemingly, but we had a good time. And he got used to me, rabbit, does not give straight to the move. And runs for me. Where I am - there he is. The situation with us, of course, is not very suitable for the hare nature. We could see for ourselves that we were noisy. Well, nothing, our Zai-Zaich is now a small shelled. He even had a wound through.

Ponochevny took the hare's left ear carefully, straightened it, and I saw a scar in a shiny plush, pinkish skin on the inside.

- The shard has run through. Nothing. Now, however, he perfectly studied the rules of air defense. A little fly in - he will be hidden somewhere in a flash. And once it happened, we would have a complete pipe without Zai-Zaich. Honestly! We hammered us thirty hours in a row. Polar day, the sun on the watch all day and night sticks out, so the Germans used it. As it is in the opera, it is sung: "No sleep, no rest for the tormented soul." So, therefore, they finally bombed away. The sky is cloudy, but the visibility is decent. We looked around: nothing seemed to be foreseen. We decided to rest. Our signalmen, too, got tired, well, and missed. Just look: Zai-Zich is worried about something. He has trained his ears and beats the Chechztku with his front paws. What? Nothing is visible anywhere. But do you know what a hare is? What do you think, was not mistaken zaichina! All sound traps ahead. Our signalmen only after three minutes found the enemy plane. But I already managed to give the command in advance. Prepared, in general, for the deadline. From that day we already know: if Zai-Zaich has instructed his ear, he beats the tap, - watch the sky.

I glanced at Zai-Zaich. Having pulled up a tail, he briskly jumped on his knees at Ponochevny, with an askance and with dignity, somehow not looking like a hare, looking around at the gunners standing around us. And I thought: “What kind of brave souls, probably, these people, even if the hare, having lived with them for a while, stopped being a coward!”