New military equipment on the parade 9 May

19 May 2014
41
In the parade on Red Square, which took place on 9 in May on 2005, on the day of the 60 anniversary of the end of World War II, the aircraft of the Russian Air Force took part for the first time in many years. During the 2008 parade of the year, the ground-based military equipment re-entered the main square of the country after a long break. After that, both foot units and military equipment of various types and classes participate in parades on 9 in May. Soon after the return of the equipment to the parades, a revival of the old Soviet tradition took place: every year a new technique comes to Red Square, which the troops have recently begun to receive. The 2014 parade of the year was no exception. It showed the general public several new types of military equipment.


For the first time, KAMAZ-63968 "Typhoon-K" multi-purpose armored cars appeared on Red Square. 12 armored vehicles of the new model took part in the parade. This technique has not yet been adopted and is being tested. Last year, the Ministry of Defense ordered an experimental batch of 30 armored cars. Nevertheless, the Typhoon-K armored cars were highly appreciated, and in the foreseeable future could become standard ground vehicle equipment. 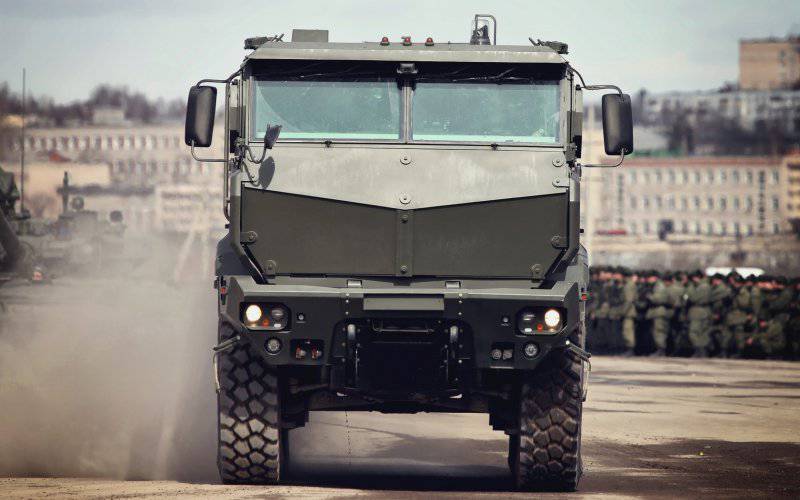 In the course of work on the Typhoon-K project, KAMAZ employees created a new chassis, which has a number of major differences from previous similar developments. In addition, the new armored car received the original armored hull, protecting the crew and units from bullets and fragments. The armored vehicle with a combat mass of about 21 tons is intended for the transport of personnel and various cargoes. The troop compartment has 16 places for fighters with weapons.

The three-axle all-wheel-drive chassis of the KAMAZ-63968 armored car is equipped with the YMZ-5367 Yaroslavl diesel engine with HP 450 power. and controlled hydropneumatic suspension. According to reports, the armored car "Typhoon-K" is equipped with a combined armor using metal sheets and ceramics. The hull and glass can protect the crew of the car from the armor-piercing bullets of large-caliber small arms. Provides protection from undermining mines under the wheel. 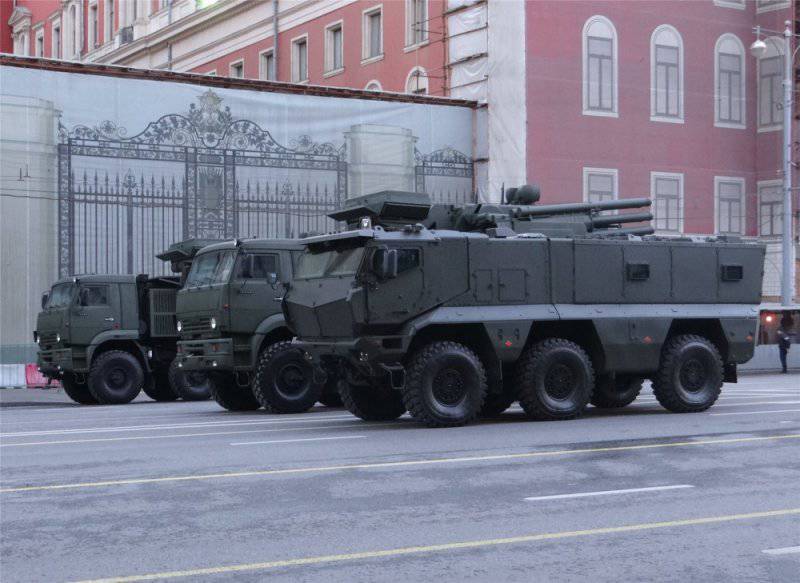 The development of the KAMAZ-63968 "Typhoon-K" armored car began in 2010. To date, built a few dozen machines of this model, which are used in the tests. The exact date of completion of the work has not yet been called. Last fall, it was reported that at the beginning of 2014, the first tests would be held, the purpose of which would be to check the level of protection of armored vehicles. In the absence of serious problems, fine-tuning and testing of the equipment may end before the end of the current year.

Soon after the "Typhoon-K" self-propelled anti-tank missile systems 9K123 "Chrysanthem-S" came to Red Square. These systems are really long-awaited for our army: their development began in the mid-eighties, the first public demonstration took place in 1996, and they were only adopted in 2013. The task of self-propelled ATGM "Chrysanthemum-S" is the destruction of armored vehicles and enemy fortifications using guided missiles.

May 9 on Red Square were machines "Chrysanthemum-S" based on the BMP-3 chassis, equipped with missiles and a complex of special equipment. During the construction of self-propelled ATGMs, automatic ammunition for missiles in transport and launch containers, a set of command and control equipment and a launcher are installed on the chassis. The ammunition complex includes up to 15 9М123 missiles or their modifications. The Chrysanthemum-S complex is equipped with a radar system, which is responsible for tracking targets and missile guidance. The rocket can be controlled both over the radio channel and with the help of a laser beam. 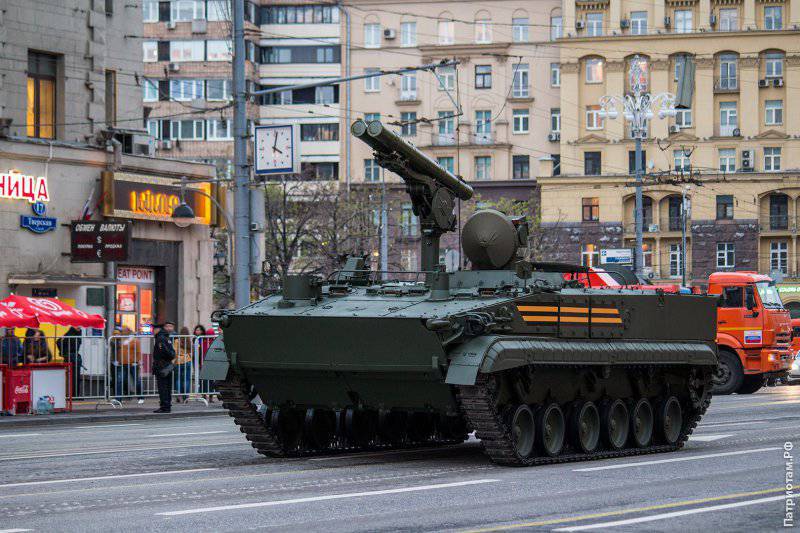 Depending on the modification of the rocket used, the 9K123 “Chrysanthemum-S” complex is capable of hitting targets at distances up to 6 kilometers. The tandem cumulative warhead of the munition is capable of penetrating up to 1250 mm of homogeneous armor, closed by a dynamic protection unit. The composition of the equipment of the complex allows you to attack targets at any time of the day and in all weather conditions.

Since last year, troops receive a new modification of the famous Msta-S self-propelled artillery. Combat vehicles of the 2C19М2 9 model of May also took part in the parade for the first time. Externally, the new self-propelled gun hardly differs from the base model - the most noticeable difference lies in the new on-board screens. Nevertheless, the modernized SAU are equipped with a number of new equipment, thanks to which they have higher characteristics. At the same time, the upgraded self-propelled gun is maximally unified with the basic combat vehicle. 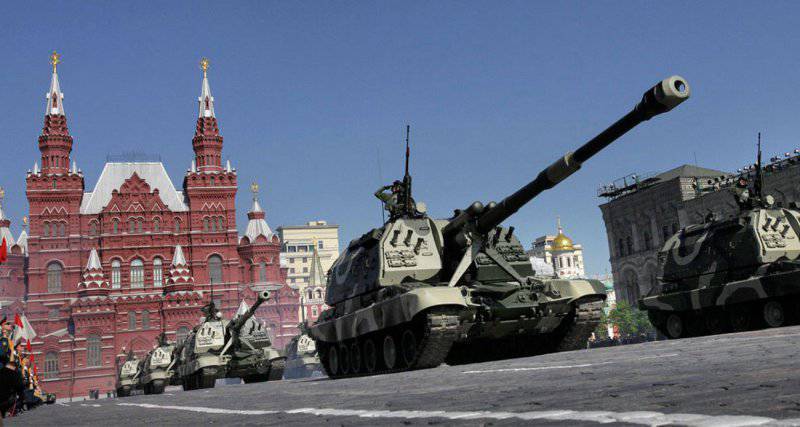 It is known that the automatic control system 2C19М2 received a new automated set of loading mechanisms, as well as a new fire control system. Using the consoles at his workplace, self-propelled gunner can perform their tasks with greater efficiency. In addition, new automated systems are used in the workplace of the driver. The updated automatics allows the upgraded self-propelled Msta-S self-propelled gun to fire at a pace of up to 10 shots per minute, automatically point the gun and restore the correct tip after the shot.

Another novelty at the Victory Day parade was the Tor-MHNUMXU anti-aircraft missile system. This complex is a new system in the line-up ZRK short range "Thor". It differs from the previous complexes of the Tor-M2U family with a set of new equipment, providing higher combat characteristics. In addition, a new missile 2М9K was developed for this purpose. The end of testing of the Tor-MXNUMU complex with a new missile was announced last fall.

The new anti-aircraft complex is able to track up to 48 air targets and attack four of them. Destruction of targets at ranges up to 16 km and altitudes up to 10 km is possible. When developing a new ammunition, the need to destroy small-sized maneuvering targets was taken into account. The Tor-MXNUMU air defense system uses a tracked chassis of the same model as the previous family systems.

New technology shows on May 9 parades have become a good tradition. From this point of view, a parade on Red Square, which will be held next year, may be of particular interest. Currently, work is underway to create a large number of promising technology projects. Some of the new machines can be shown to the public already in 2015 year. For example, several years ago, representatives of the defense industry promised to show the latest Armata tank at the 2015 parade of the year. In addition to this machine, several new universal armored platforms are being created. This means that the following parades on Victory Day will once again become a platform for displaying the latest technology of the armed forces.