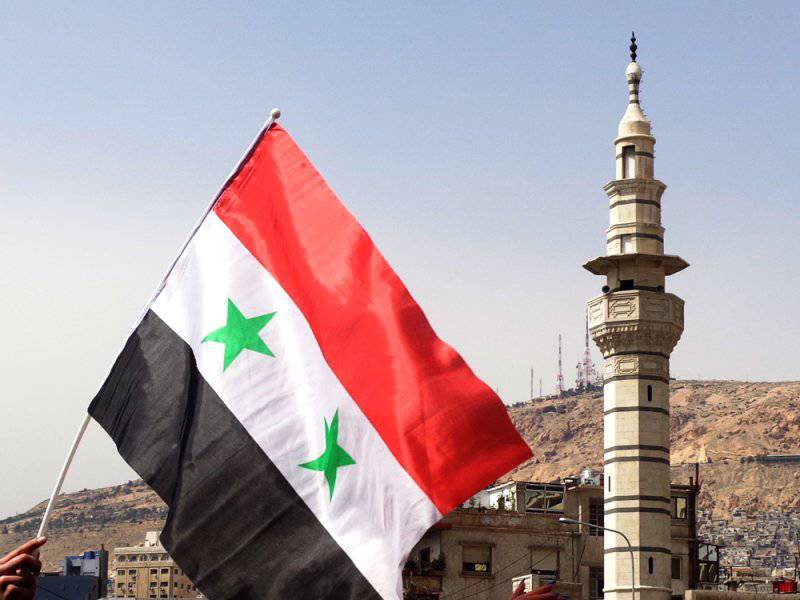 I want to start with joy news - In Syria, several employees of the international organization Doctors Without Borders were released, who were captured by the 2 terrorists in January of this year. People in white coats complacently tried to build a field hospital for all affected by the Syrian crisis, regardless of whether they are supporters of the legitimate government or the so-called "opposition". However, the militants did not appreciate this idealistic plan and seized the doctors. As stated by the head of the Doctors Without Borders organization, the abduction of employees was “a cynical act that cut the already affected people from the war from much-needed help.”

In early April, three people from this group were released from captivity, now another five more.

In addition, two employees of the British newspaper The Times, the correspondent Anthony Loyd and the photographer Jack Hill, were released from gangster captivity. Previously, they were captured by the same terrorist group, which was entrusted with their lives during their stay in Syria. Instead of protecting journalists, as was agreed, the bandits revealed their criminal nature in all its glory - they only needed a ransom for foreigners. British journalists spent several days in the hands of the rebels in the city of Tel-Rifat, Aleppo Province, near the Syrian-Turkish border.

According to the released, they tried to escape, but were caught. They were severely beaten, and one of them was shot twice in the leg. They managed to rescue by a miracle - another terrorist group, at war with the first one, in order to “annoy” its rivals, freed the British.

Already more than once with people from the Western world who trust terrorists and consider them “freedom fighters” stories. Sobering occurs only after captivity, ordeals, loss of health, physical and moral suffering. And then - if lucky enough to stay alive.

In the same way, the West as a whole, flirting with terrorists, with Islamist extremists, ultimately risks the same. Playing with a wild beast, you can be in his mouth. But for individual politicians from the United States and Europe, the interests of their own people are not important - they are guided only by their short-term interests, and very strange ones. Give them the overthrow of Bashar al-Assad - and there though the grass does not grow.

It would seem that the true face of the Syrian terrorists has already been revealed to the whole world. Many analysts and sober-minded political figures in the West are warning of the dangers of Islamist radicals for the peoples of Europe itself. But the “mighty of this world” is not listening to them.

15 May, while beaten and wounded British journalists were looking for ways to get out of Syria, a meeting of the so-called “Friends of Syria” took place in London. About this hypocritical group of countries already had to write repeatedly. “Friendship” in their understanding is complicity in the destruction of the country, the killing of its citizens, and even cannibalism, revealed by the militants. And at this meeting, these "friends" decided to increase support for the "moderate opposition".

All over the world, moderate opposition is understood as the one that fights by political methods, but not armed. Which goes to the polls, but does not pick up machine guns and mortars. Which creates a party, and does not blow up people on the streets and in houses.

But the "friends of Syria" have come up with their own "moderate opposition", which is helped weapons and other military means. The election, in their understanding, is something unworthy of attention and subject to attempts at disruption.

Participants in the hypocritical meeting, including US Secretary of State John Kerry, once again raised the haggard question about the alleged use of chemical weapons by the Syrian army, without citing any evidence.

Earlier, on May 13, during his visit to the United States, French Foreign Minister Laurent Fabius, repeating unsubstantiated accusations against the army and SAR leadership, regretted that direct aggression against Damascus had not taken place. “France regrets that President Barack Obama did not make a decision to strike at Syria. We regret it, because we believe that this would change a lot in the situation, ”he said. By law, such statements should be considered by the International Criminal Court as a direct incitement to war. Moreover, such words automatically reduce international relations to the level of a gangster gathering, since they contain a shameless call to violate all possible laws, trample the UN Charter and make an armed attack on a sovereign state.

The charges of Kerry and Fabius continue to do their dirty deed. Because of them, the inhabitants of the city of Aleppo for over 12 days have no drinking water. Terrorists seized a water supply station in the village of Suleiman Al-Khalyabi. According to eyewitnesses, Aleppians walk around the city with plastic bottles, kettles, pans, and everywhere are looking for water - even in shallow, almost dry rivers and muddy puddles.

On this occasion, the SAR Ministry of Foreign Affairs sent special messages to the UN Secretary General and to the UN Security Council: “The residents of Aleppo were subjected to the most severe mass punishment by bandit groups for opposing their presence in the city. Three million people are deprived of the ninth day of clean drinking water coming from the pipeline, and are forced to use other water sources that are often unsuitable for drinking, in particular, river water, which significantly increases the risk of spreading infections. ” “Some parties,” continued the foreign affairs agency, “deliberately ignore the fact that it is the terrorists who are guilty of worsening the humanitarian situation in the regions under their control in Syria.”

Punishing thirst is not the only crime of militants against Aleppo civilians. So, on May 14, a woman and four of her children died as a result of a mortar attack on the Al-Khalidia quarter.

On the same day, several residential neighborhoods were attacked in Damascus, including Duweil, where five people were injured, including two children, eight and ten years old. In the province of Damascus, a shell hit a residential neighborhood of Harasta - one person was killed, three were injured. In Quneitra province in the city of Khan Arnabi, 4 explosions of shells fired by bandits resulted in the death of one person and the injury of another.

15 of May, at the very time when the “friends of Syria” were meeting, - in Damascus at the hands of the “opposition” peaceful people again died. The mined motorcycle was blown up at the Dar Dar-Shifa hospital. The attack claimed the lives of two people, six Syrians were injured.

But the "friends of Syria" do not hear the death moans of the innocent victims - they continue to assist the murderers.

Russian Deputy Foreign Minister Mikhail Bogdanov condemned this meeting of the “friends of Syria”, stressing that this group adheres to flawed and destructive philosophy. “Moscow, unlike some of its Western partners, works with all parties to the Syrian conflict, and not just with one, thereby supporting it against the other,” the diplomat added.

In turn, the official representative of the Russian Foreign Ministry Alexander Lukashevich said that Moscow does not exclude the possibility that Russian parliamentarians will be observers at the upcoming presidential elections in Syria. Earlier, Vice-Speaker of the Federation Council of the Russian Federation Ilyas Umakhanov, on behalf of the senators, said that members of the Federation Council are ready to be election observers. "Russia proceeds from the fact that the elections will have a positive impact on the situation in Syria," he added.

In addition, Russia submitted to the UN Security Council a draft resolution on Syria. This document expresses support for the practice of local pacification and stresses the need for a political resolution of the crisis. As the Permanent Representative of the Russian Federation to the UN, Vitaly Churkin, said, the text of this project concerns humanitarian aspects and aims to support the political process, which is based on a local truce in Homs. UAR Permanent Representative to the UN, Bashar Al-Jafari, welcomed this Russian initiative. According to him, the process of local pacification takes some time, but brings success.

Thus, unlike the position of the West, which is obstructing elections, Russia is making efforts to achieve peace in Syria and welcomes the democratic process of presidential elections.

As for the USA and Europe, instead of admitting defeat, they continue the dangerous game of fire. The game, which resulted in the fire of Islamist terrorism could spread to the West, leading to unpredictable consequences.