Crimean Tatars will never repeat the actions of Lviv nationalists 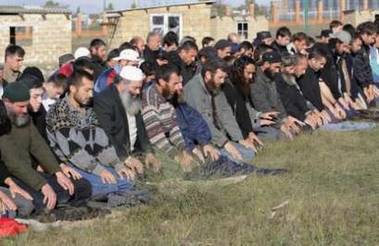 Despite the fact that at one time the Crimean Tatars became a victim of the Soviet government and considerable merit in depriving them of their homeland lies on the shoulders of the rulers of Tsarist Russia, today it can be noted that Tatars are much closer in their spiritual consciousness to the Russian people than to the population of Western Ukraine . But what is the reason for such a frank Russian orientation of the indigenous people of Crimea? Perhaps the reason is that the population of Western Ukraine and Russia perceive the events of the Great Patriotic War differently and in this case the Crimean Tatars prefer the Russian historyrather than incomprehensible to many Western Ukrainian.

It is safe to say that the Crimean Tatars were lucky and the reason for this luck is that the modern “Donetsk” government of Ukraine does not pay much attention to the region. To turn the celebration of the 67 anniversary of the deportation of the Crimean Tatars into something like the celebration of 9 in May in Lviv, no one intends, and there is hope that everything will pass peacefully and calmly.

As a rule, the annual script on 18 May is a kind of litmus test indicating the degree of exploitation of the historical memory of the Crimea. If, at the moment, it is beneficial for the authorities or individual politicians to connect the “Crimean separatists” with the Muslim community, then the anniversary of the deportation will be marked with facts of violence, violently and aggressively. In the event that such scenarios are postponed for a certain period to the reserve, then the natural manifestation of sympathy for another's grief distracts the entire population of the peninsula from the national ambitions of the Crimean Tatars.

The events in Lviv once again outlined the Ukrainian split, became a causal discussion of the deliberately losing topic of attitude to the Great Patriotic War. Losing due to the fact that in human ideology there is nothing more sacred than the memory of the war. Especially if we are talking about the 1941-1945 war, veterans of which are in almost every family. The attempt at the sacred - the "historical truth" - outraged even those who might not call the countries participating in the anti-Hitler coalition. Obviously, it is the single and indestructible myth of the Great Patriotic War that remains the only thread that still binds together former residents of the republics of the USSR. And vice versa - attempts to voice the history of the war in another way dig no less than anti-tank ditches between countries, regions and nationalities, once united and fraternal.

At the same time, it is not even the facts and exact data that are important, but the historical myth, together with intonation and emotion in relation to the war. As a simple example: the fact is that the number of ethnic Russians who fought on the side of Nazi Germany exceeded the number of ethnic Ukrainians who fought against the Red Army - and not only in absolute terms, but also relative ones. But the Russian mythology of war does not give traitors a place in the camp of heirs, veterans of the Great Patriotic War. They are not recognized at the state level, are not honored on a par with veterans, and are not described as victims of circumstances.

As a result, the fact of mass betrayal in the occupied Russian territories did not enter the modern national mythology of the Second World War. At the same time, similar processes in Western Ukraine were thoroughly entrenched in the official historical paradigm advocated in Galicia. This national identity in relation to the past is the main starting point in the search for ways of convergence. Whenever the conversation about the Crimean Tatars is started, the mischievous and false patriots practice their descriptions of the “mass betrayal of the Crimean Muslims” towards the local partisans. At the same time, rarely anyone remembers that the Crimean Tatar myth of the Second World War, in fact, is identical with the Russian interpretation and is far from the notorious Galician.

In contrast to the inhabitants of Western Ukraine, the Crimean Tatars and their political leaders do not seek to justify those who collaborated with the Nazis. They do not put monuments on their houses do not attach memorial plaques. They simply do not see, they are nobody.

Every year on May 10, even representatives of the Majlis, who are famous for their national egoism, lay flowers at the memorials of Muslims who fought on the side of the Red Army. They are well aware that it was a general war and its heroes are equally close to each of the nations, but they also understand that the traitors are the same in any country.

In fact, the similar proximity of the Russian and Crimean Tatar war myths is the main starting point for possible attempts to build a peaceful dialogue on the peninsula. This is the very legacy that can be appreciated only by losing it. In the event that the Crimean Muslims tomorrow will be carried away by the historical revisionism, then the events in Lviv will seem a trifle in comparison with the scale of the new possible identification confrontation.