The oath under the trunks: why contract servicemen flee from the National Guard under 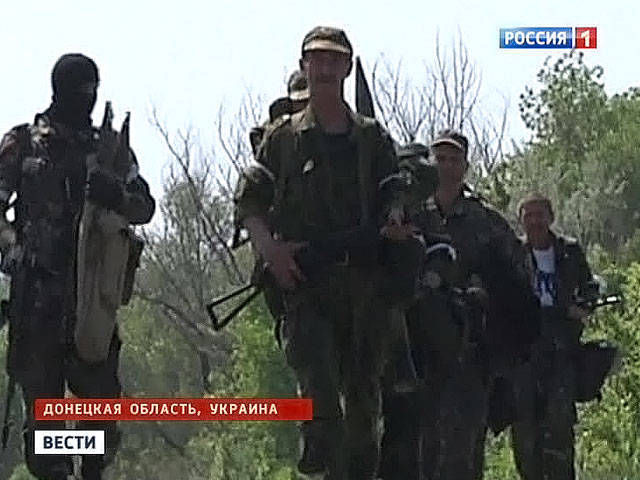 Southeast of Ukraine. The Kiev authorities not only failed to fulfill the ultimatum of the Donetsk Republic on the withdrawal of troops, but, on the contrary, continue to increase their military presence in the Slavyansk region. In response, the militia last night conducted several successful operations to unblock the roads. From the Ukrainian side, meanwhile, the missing persons appeared, and, according to incoming information, we are talking about people who are shot for refusing to carry out orders.

The Ukrainian army continues to nashpigovyv neighborhood Slavyansk metal. At night and at dawn, near the checkpoint near the village of Semenovka, there were battles. The fragments of shells cut the reinforced concrete pillars and the neighboring houses. Aggressors drove more than two hours. Successfully.
“Today we have occupied a strategic area — this is the Rostov-Kharkiv highway,” said one of the militiamen. “We ousted the Ukrainian armored vehicles, which were subordinate to the Kiev junta, and are taking up positions here. We will stand to the last.”

“We started throwing mines at them, and then we went on the offensive, and they retreated from this position, right from this place,” said another self-defense fighter.

It is impossible to hand over the roadblock in Semenovka under any circumstances. On this road, products and medicines fall into Slavyansk. The duty will now be around the clock. Volunteers bring fighters food and water. On the street plus 32. But on the fighters full outfit.

After a hard night clash, self-defense forces strengthen their positions at roadblocks surrounding Slavyansk. They dig in themselves and dig in heavy equipment. Uninvited guests are expected in a few hours. Ukrainian military are located just two kilometers away.

Today, the Ukrainian military did not report anything about their losses. But in recent history about how the 102 recruit from Zhytomyr deserted from the army, the militia did not believe. They say that there are witnesses that they allegedly buried their alleged deserters on Mount Karachun, the height from which Slavyansk was shot every night. According to the self-defenders, half of these hundreds died from the explosion of a warehouse with ammunition, someone was shot by the commanders for refusing to carry out an anti-people order.

“They shot them! And what they write in our Ukrainian media, although they are not mine, I don’t live in Ukraine, I live in another state, in another republic. I don’t know how they will explain to their mothers that is, I know that they are missing. They will not receive any allowances, it was easier for them to bury them on Mount Karachun and at the poultry farm. So only the fascists did, "says Vladislav, a fighter of self-defense in the Donetsk People's Republic.

The fact that these are not empty words, say themselves deserters. This young man was a contract soldier in the Kharkov motorized brigade. When the Maidan began, the commanders told the soldiers that the army could not interfere, they say, there are people. When the East flared up against the fascism spread, the situation changed. “The directors told us in plain text that if we did not carry out the order to disperse the civilian population, they have guns and they will shoot us in the back. I just could not stand it and left,” said a former contractor of the Kharkov brigade.

Every day, civilians continue to die. Today, not far from Slavyansk, the National Guard under shot a man. Nearly body defiantly left weapon, making it clear that they killed the enemy. But in the headquarters of the militia have already said that the dead was not part of the self-defense forces.

In the neighboring village of Novovarvarovka today they said goodbye to a young woman. Two days ago she tried to take her son to a safe place. But fell into the hands of the National Guard under. The woman was shot from a cannon mounted on an armored personnel carrier. “There, they shot her whole head, there were a lot of injuries, just awful,” says the husband of the deceased, Alexander Ott.

Slavyansk help the whole world. Almost every day a car arrives from Donetsk with humanitarian aid. Products, medicines, including insulin, are bought for their money by ordinary people. Most parcels for children, with diapers and meals. Each humanitarian flight may be the last.

"I want to contact the representatives of the Red Cross to send their mission. Because they just kill us. For them, the Red Cross is like a rag for the bull, especially if you go in the evening when mercenaries are standing at roadblocks. They don’t even understand Russian, they just shoot, "says Mikhail Kalchev, one of the volunteers.

Apparently, Kiev does not intend to withdraw the troops. To Slavic all new forces. Another week of shelling, and the outskirts will be a continuous minefield.

Ctrl Enter
Noticed oshЫbku Highlight text and press. Ctrl + Enter
We are
Ukraine is not Europe, Donbass is not IraqGoing to Novorossia - part I
Military Reviewin Yandex News
Military Reviewin Google News
11 comments
Information
Dear reader, to leave comments on the publication, you must sign in.