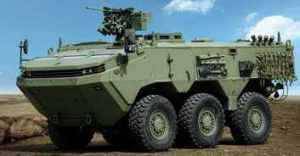 Otokar, a leader in the design and manufacture of armored tactical vehicles of the Turkish defense industry, demonstrated its new ARMA tactical wheeled armored vehicle with 6x6 wheel formula at Eurosatory.

Otokar also presented its world-famous armored vehicle COBRA and its mine-protected version, KAYA, at its booth.

ARMA is the latest product developed by Otokar. He confirms the competence of the Turkish company and its ability to conduct independent research and development in the field of armored vehicles. ARMA is a new modular product family in Otokar.

The machine has a high level of ballistic and anti-mine protection. Its design allows the integration of various types of combat modules and special equipment, which will allow the ARMA platform to be adapted for various needs in the conditions of the modern battlefield.

ARMA has a total weight of 18500 kg and a load capacity of 4500 kg. It allows you to transport the driver, commander and 8 paratroopers in the hull, completely protected from weapons mass destruction. The machine can be transported by air in a standard configuration with a C-130 transport aircraft.

ARMA has two front axles that are controlled, which provides the vehicle with a turning radius of 7,85 m. It has an independent hydropneumatic suspension, providing comfortable off-road movement. The wheels are equipped with a central tire inflation system and a run-flat disc in a standard configuration.


ARMA can overcome entry and exit angles to 45-degrees 60% gradient and 30% side slope. It can also cross the 1,2 trench in width and the vertical wall 60 cm high.

Water cooled diesel engine with horsepower 450 can run on F-34 or F-54 fuel and transmits torque to the wheels through an automatic gearbox and single-speed transfer case, providing the car with a maximum speed of 105 km / h and specific power 24,3 hp / t.

The devices are powered from the onboard DC network 24 B.

The engine is located on the right front of the machine, which provides a relatively large internal volume that can be used efficiently and ergonomically. At the same time, the internal layout provides for all personnel, and especially the commander, the ability to maintain constant eye contact with each other.

ARMA can switch between 6x6 and 6x4 modes, depending on the terrain conditions. The machine is floating and set in motion on the water by two hydraulically powered water cannons. Ballistic and anti-mine protection is provided by a solid all-welded ARMA body, as well as the landing of all personnel in anti-mine seats.

ARMA design began in 2007, when the company opened its own funds to finance projects for both the domestic market and for export deliveries. All development, including qualification and validation of processes, detailed design, computer engineering and technical studies, is performed by Otokar independently.

ARMA 6х6 along with the entire family of machines, including the 8x8 version, will be ready for full-scale production at the end of the 2010 year.