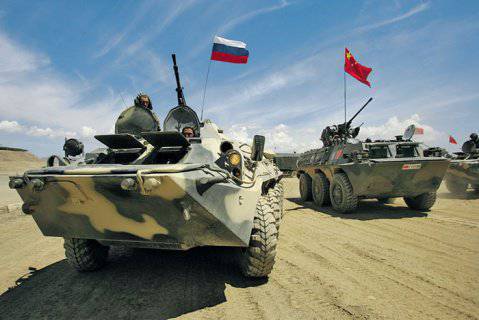 Beijing’s position on the Ukrainian-Crimean issue has become an important factor in both world politics and the most severe information war unfolding as part of this crisis.

In particular, the pro-Chinese lobby in Russia was very actively trying to prove that Beijing supported Moscow in this matter. The evidence cited история about how the representative of China in the UN Security Council during the voting on the "Crimean" resolution abstained, while smiling. It remained unclear why “abstinence” equals support and why we should be touched by the smile of a Chinese diplomat. However, the lobby was fulfilling the Peking order and propaganda in general — it is propaganda.

As for the real state of affairs, China found itself in a very difficult situation for itself. It is completely obvious that neither what happened in Kiev (the violent overthrow of legal authority), nor what happened in Crimea (loss of a part of its territory by the state) was unacceptable to him. In the first, China blames the West, in the second, Russia.

In addition, as a result of the current crisis, the interests of China in Ukraine and especially in the Crimea were under attack. In particular, the implementation of the project of the deep-water port in the west of Crimea. This causes a serious blow to the project of the New Silk Road and, if possible, the export of grain from Ukraine.

The “New Silk Road” is today one of the most important geopolitical projects of Beijing and is so openly anti-Russian in nature that even some representatives of the above-mentioned Pro-Chinese lobby in our country noted this.

It aims to finally and irrevocably “kill” the Transsib and the Northern Sea Route as Eurasian transit communications. The project envisages, in particular, the construction of a European gauge railway through Central Asia. The deep-water port in the area of ​​Evpatoria was considered as the most important node on the Silk Road. To return to the construction project of this port, China must officially recognize the fact that Crimea belongs to Russia, which is extremely difficult.

It is likely that at least the project with the lease of 3 million hectares of Ukrainian agricultural land, part of which fell on the Crimea, will be postponed. The fact of the existence of this project was strongly denied in Kiev (under Yanukovych), but it was not denied at all in Beijing. A unique feature of the project was that from the Chinese side, the Xinjiang Industrial Building Corps, which is a special component of the PLA (a kind of synthesis of the construction battalion and the Internal Troops), acted as the tenant. It is this structure that has at its disposal 5% of Ukrainian territory on the basis of extraterritoriality and with the possibility of renting additional space. In this regard, the Russian Internet version even appeared that for Moscow the most important goal of joining the Crimea was the destruction of all these Chinese projects.

Officially, Beijing on the Ukrainian-Crimean crisis did not charge anyone. Instead, he led his characteristic "peacemaking" rhetoric, which could be interpreted almost in any way and in any direction. So, regarding the situation in Ukraine, Chinese President Xi Jinping said that China has always adhered to "a fair and objective position." Beijing made its own proposals on this issue, suggesting the creation of an international coordination mechanism as soon as possible, and called on all interested parties not to take any action that could lead to a further deterioration of the situation. “China favors a constructive effort on the part of the international community to reduce tensions and welcomes any suggestions that can help find a political solution to this problem,” Xi Jinping said.

In the spirit of this position, there was a vote on the "Crimean" UN Security Council resolution 15 in March and on a similar UNGA resolution 27 in March: China abstained in both cases, not supporting either Russia or the West in this way. The interpretation of voting as support for Russia is absurd and contrary to common sense. Russia's support is a vote against resolutions. This is exactly what 27 did in March. 10 countries, China was not among them.

As a result, at the level of statements by officials, Beijing’s position turned out to be highly streamlined. To express a real position there is an English-language newspaper Global Times. It is not formally officialdom of the CPC, but it is precisely for this purpose that it is intended to convey to the outside audience the real position of Beijing on those issues on which he does not want to speak out officially.

Shortly after the referendum in Crimea, the Global Times published an article, the content of which is expressed in the following quote: “Unconditional support for Russian military aggression in Ukraine would not justify confidence in the time-tested diplomatic principle of China’s non-interference and would allow foreign powers to intervene in China’s internal affairs in its western regions, such as Xinjiang and Tibet, where ethnic tensions and separatist movements exist. China’s approval of secession of Crimea from Ukraine through a referendum would be hypocrisy, since China itself introduced in 2005 a law banning secession from the state. This law may allow the use of military force against Taiwan if it declares independence from China through a referendum or other official procedures. ”

As we see, Beijing has taken a frankly anti-Russian position. However, a few days later, another article appeared in the same Global Times, and an editorial, under the heading: "To support Russia is in the interests of China." Its essence is that “the Ukrainian question has long gone beyond the borders of the internal affairs of any country. ... Today, only Russia and China really form a strategic buffer for each other, making possible the revival of our states. If Russia, led by Putin, falls under the onslaught of the West, it will be a heavy blow to our strategic interests. ”

IF POWER IS VISIBLE

Of course, in a few days the position of the Chinese leadership could not change. But China was clearly afraid to speak directly against Russia. This would immediately destroy the so-called strategic partnership of Moscow and Beijing, leaving China alone in front of the West. In addition, during the Ukrainian crisis, Moscow demonstrated the presence of powerful modern armed forces and the readiness to use them, despite the risk of a big war. And from the point of view of military art, the Crimean operation of the Armed Forces of the Russian Federation can be considered a masterpiece. Undoubtedly, this made a strong impression on Beijing, which is best understood and appreciates precisely force. In this regard, the conflict with Russia is becoming even more unacceptable for China. Finally, the Chinese leadership could not fail to appreciate the fact that Russia ignored the opinion of the West, but it did not take any real measures against it not only of a military, but also of an economic nature. The so-called sanctions are blatant clowning, and the “NATO response” is just some kind of grotesque. Thus, here Russia demonstrated strength and won.

However, now it is important to further develop the situation, namely, to what extent Moscow is able to draw adequate conclusions from what happened. The main conclusion is that it is necessary to continue to demonstrate Beijing's strength, and not to make concessions to it. Moreover, for such concessions there was not and not the slightest reason. We have nothing to "reward" Beijing, it did not help us.

In particular, the sale of even the Su-35С fighters to China, let alone the C-400 SAM, would be a gross mistake. We must once and for all stop selling the newest weapons the main potential opponent. While in 90, this was justified by the need to support the existence of a domestic defense industry that remained without internal orders (especially since Beijing bought large quantities of military equipment for substantial sums), today this motive has disappeared, and no others have appeared. DIC does not have enough capacity to fulfill domestic orders. In addition, we have a sufficient number of other buyers who are not potential adversaries. And besides, China is now acquiring equipment in minimal batches, and its only goal is the theft of technology.

Right now, the most opportune moment has arisen to change the nature of relations with China, which until now have been profitable exclusively to China. Not only to stop the sale of weapons, but not to make concessions in the fields of politics and economics.

Moscow in the days of the Ukrainian-Crimean crisis quite adequately behaved in relation to NATO, not being frightened by this paper tiger. China is not a paper tiger, it is stronger in all senses than the West. But as long as his power has a limit. And the annexation of the Crimea should not be a precedent for China (it does not need precedents, but acts in accordance with its own capabilities), but, on the contrary, an indicator that Russia needs to moderate its appetites for the eastern territories.

You can even keep the old rhetoric about the "strategic partnership", but in reality the relationship should become extremely tough and pragmatic. If Moscow decides that it must somehow yield to Beijing, then in the foreseeable future, all the benefits of Crimean Victoria will turn into huge problems on the other side of Russia. It is a gross mistake to consider China a real counterweight to the West. China is the main threat for us, the West has nothing to do with this fact. You can play with Beijing very quickly, and then it will be too late to play back.

Ctrl Enter
Noticed oshЫbku Highlight text and press. Ctrl + Enter
We are
A great interview with Sergey Lavrov: about Ukraine, Obama and IranWhat you didn't want to know about England
Military Reviewin Yandex News
Military Reviewin Google News
155 comments
Information
Dear reader, to leave comments on the publication, you must sign in.