China and Vietnam have in the past more than once fought each other. Researchers have almost a dozen wars between Vietnam and China, which in Vietnam are called domestic. Small conflicts were even more. The Sino-Vietnamese war of 1979, in which both sides declared their victory, has not yet faded from memory. Therefore, the current conflict overlaps with long history difficult relationship between the two Asian powers. Because of this, it is impossible to exclude the negative scenario, especially in connection with the growth of general tension in the Asia-Pacific region and in the world.

Normalization of relations between Vietnam and China came only in the 1990-ies, when economic considerations supplanted political ones. For more than two decades, China and Vietnam have developed bilateral relations for mutual benefit. However, in recent years, the situation in the world began to change, and China gained strength, and great-power notes appeared in its policy. China increasingly began to recall its territorial claims against its neighbors, and, relying on a powerful economy and modernized armed forces, is no longer inclined to make concessions.

We must not forget that over the long years of growth of the economies of the Asian powers, they have formed a broad layer of the middle class, which, although far from the American and European middle class, but in its psychology is similar to the Western bourgeoisie. His ideology is nationalism. Vietnamese society regards the actions of China as aggression, which must be answered accordingly. Similar moods reign in China.

The Vietnamese authorities, irritated by the actions of the Chinese and wanting to channel the discontent of people, put pressure on China, weakened control and allowed small demonstrations. However, the protests led to pogroms and a huge surge of discontent, not only in Vietnam, but also in countries where there are numerous Vietnamese diasporas. Hanoi due to the actions of Beijing was faced with a difficult choice. It is impossible not to answer, it will show the weakness of the country and cause discontent among the population, including ethnic Vietnamese outside the country. A foreign policy crisis can also cause an internal political one. On the other hand, given the close economic cooperation between the two countries, the escalation of the conflict to Hanoi is unprofitable.

It is clear that the anti-Chinese pogroms that led to the victims would stir up so strong nationalist sentiments in China. The anti-Japanese pogroms in China, also caused by the territorial disputes of two Asian giants, have already shown the world that the sentiments of the advanced part of the Chinese public have changed a lot. The Chinese wish to receive the fruits of their recent internal victories. Successes in foreign policy should show the whole world the change in the status of the “Middle Empire”. The mouthpiece of the Chinese Communist Party, the People's Daily newspaper, blamed the pogroms on Hanoi and demanded to ensure the safety of Chinese citizens. Other publications allow themselves and more harsh statements, demanding to punish Vietnam.

As a result, Beijing finds itself in a difficult situation. The population is waiting for a hard response to Vietnam. However, a tough standoff is not beneficial for China. This is a blow to the economy and the emergence of the threat of folding the "anti-Chinese bloc." The United States is not slow to use the situation to strengthen its position in the APR. The United States has been working on the creation of the anti-Chinese “sanitary cordon” for years. China has territorial disputes and historically disputed territories with almost all its neighbors. The stronger the PRC will put pressure on Vietnam, the greater will be rebuffed in Vietnam itself and the greater will be the distrust of China in the region. This is beneficial to the United States.

In addition, strong pressure from China will force Vietnam to more actively seek allies. Vietnam has already become close to India, which also fears the growth of China’s power. There was also a certain convergence of the positions of Vietnam with the United States. The United States already indirectly supports Vietnam in this conflict. So, commenting on the story of the Chinese oil rig, press secretary of the US State Department Jennifer Psaki called China’s actions provocative and not conducive to maintaining peace and stability in the region. And US Secretary of State John Kerry said that China is taking “aggressive and provocative” steps.

Strengthening US Positions in the Philippines

The escalation of the conflict between China and Vietnam took place against a background of a less visible, but also threatening to serious consequences, a clash of interests between China and the Philippines. Thus, Manila filed a complaint against Beijing with the International Court of Justice about the rights to a number of islands in the waters of the region. And recently, the Philippine Foreign Ministry accused China of building an airfield on one of the disputed islands in the Spratly archipelago. The representative of the Ministry of Foreign Affairs of the Philippines, Charles José told reporters that the Chinese have begun preparatory work on the construction of the runway on Johnson Island, which is part of the Spratly archipelago. According to Manila, Beijing is violating the Declaration on the Actions of the Parties in the South China Sea, it is an informal code of conduct for the countries of the entire region. The Philippines protested and raised the issue at the Summit of the Association of Southeast Asian Nations (ASEAN), which was recently held in Myanmar. However, not much success was achieved. 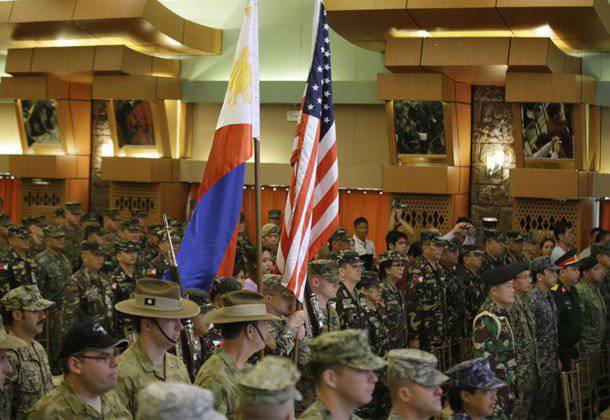 The new military pact of the United States and the Philippines has a validity of 10 years and can be extended. Manila took such a step because of the strengthening of Chinese positions in the region. On the maritime border of China and the Philippines, various incidents occur regularly. So, the Filipinos, in order to defend their right to the Bank of Second-Hand Thomas, stranded an old ship and placed a garrison on it (a division of marines). And the Chinese are trying to prevent the change of the garrison and the supply of supplies. Such incidents occur regularly.

The Philippines does not have the financial ability to independently create and maintain powerful armed forces. They are doing everything possible to strengthen their Navy, Air Force, Airborne Forces, and the United States is a great help in this. However, their financial resources are not comparable with the capabilities of Japan, South Korea and Vietnam. Therefore, the American military presence is a kind of guarantee of military security. For this, you can turn a blind eye to the attendant troubles, such as the antics of American marines.

Japan rated this agreement as anti-Chinese. Japanese Secretary General Yoshihide Suga said that the Japanese government supports the military agreement between the United States and the Philippines and hopes that the presence of American troops will help to contain China’s military power. According to Japan, China is constantly increasing its military presence in the East China and South China Seas. In addition, Japan supported the claim of the Philippines to the International Court of Justice on the rights to a number of islands in the waters of the region.

It should be noted that Manila, like other US allies - Tokyo and Taipei, doubt the Americans' readiness to come to their aid in the event of a military conflict with Beijing. The reason for such doubts give the Americans themselves. For example, Deputy Assistant to the President of the United States for National Security Ben Rhodes said that the situation in the South China Sea is more complicated than with the Japanese-owned Senkaku Islands (Diaoyu). Over these islands, the Japanese exercise administrative control. Therefore, according to the American president, they are subject to the Japanese-American security treaty. In the case of a territorial dispute between China and the Philippines, the situation is unclear and is “more hypothetical”.

This makes the American allies nervous. They are not sure that the United States will come to their aid. Good precedents already exist. The United States did not respond to the defeat of Georgia in 2008 and the separation of Abkhazia and South Ossetia from it. The United States could not prevent the reunification of the Crimea with Russia and the creation of the Donetsk and Lugansk republics. Special attention is drawn to the situation with the Crimea. Experts talk about the possibility of the “Crimean scenario” in the Asia-Pacific region. China may try to capture the Senkaku Islands, or it will put pressure on Taiwan. A similar scenario is possible in the South China Sea.

If we recall world history, and many events and processes tend to be repeated, many large wars began like this. Someone had doubts about the strength and determination of the opposite side, it began to seem that the neighbors would not interfere, etc. In particular, Berlin in the 1914 year started the war in full confidence that London would retain neutrality. And the British did their best to show the Germans that they would stand aside. As a result, the world war began. Such chains of mistakes and lead to military-political disasters. In the Pacific, all these conditions exist. In addition, there is the possibility of "accidental" (all the serious prerequisites for a war are already there) of the outbreak of war. Sooner or later someone will open fire. The spark will lead to a general fire, and it will be too late to look for a specific culprit (or provocateur). 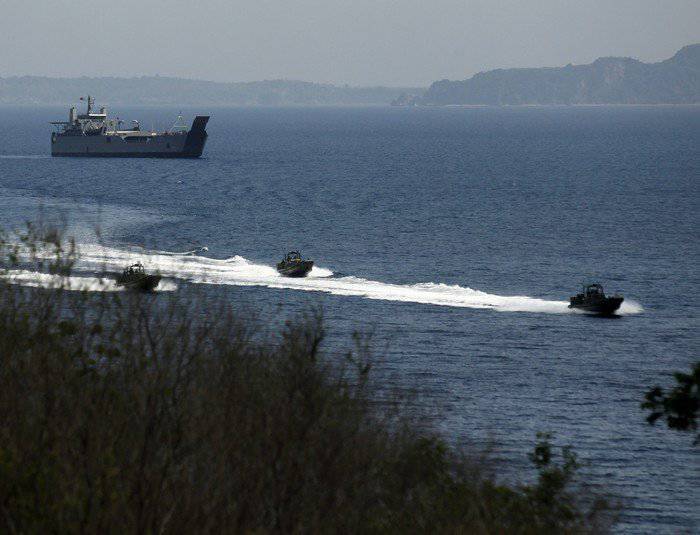 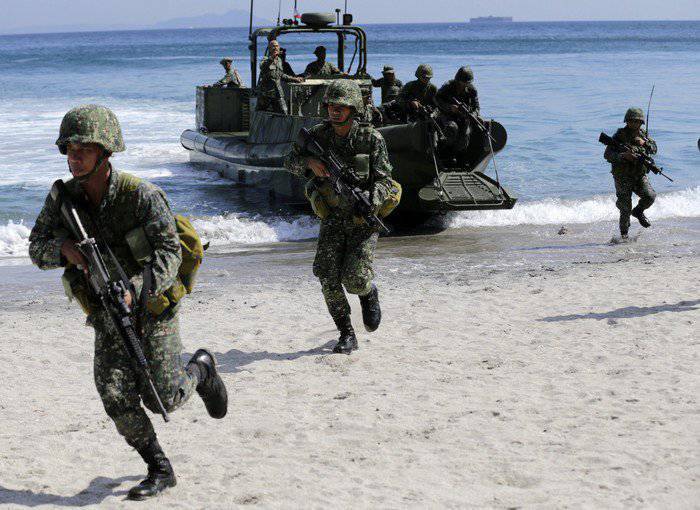 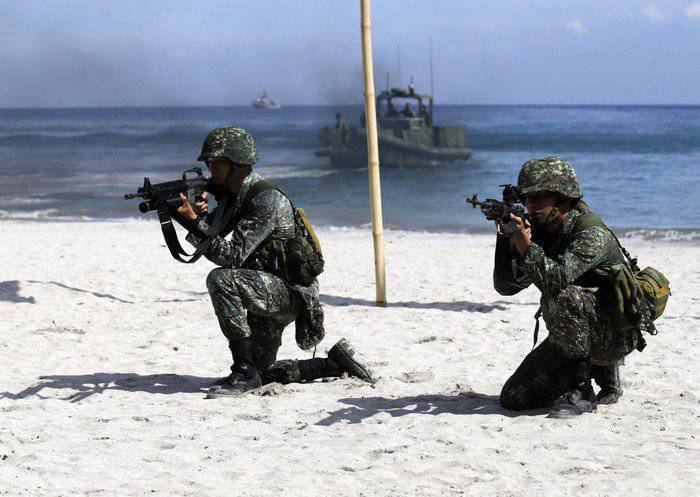 Philippine and US military exercises

Russia in this situation is in some respects on the same position as the United States. We get the opportunity to be the arbiter and everyone needs our support. And it is necessary for China and its rivals. The difference in the positions of Russia and the United States is that we do not benefit from a serious conflict in the APR. The Pacific Front is another zone of instability at our borders. A serious conflict in the Asia-Pacific region carries with it a mass of poorly predictable and negative consequences that will inevitably affect our Far East.

On the other hand, the growth of tension in the region allows us to begin work on restoring the position of one of the leading powers in the region. Russia traditionally stood for peace and justice. Vietnam is our traditional ally, arms buyer and trading partner. But it is also necessary to maintain good relations with China without becoming its “junior partner.” Japan is also interested in Russia.

Be that as it may, Russia needs to make great efforts to seriously strengthen the Pacific fleet, ground forces and the Air Force in the Far East. This will make it possible to secure our Far Eastern borders and strengthen the political weight of the Russian Federation in the Asia-Pacific region. At the same time, it is necessary to solve the demographic and economic problems of the Far East so that it remains Russian in the future.