Fees for junior commanders of the Interior Ministry of Russia 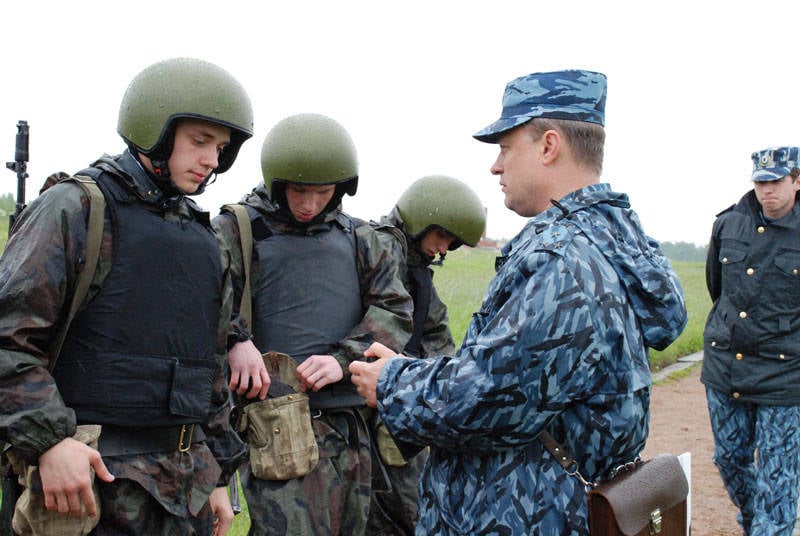 On the initiative of the Main Command of the Internal Troops of the Ministry of Internal Affairs of Russia, instructor-methodical exercises with sergeants and petty officers from among the “contract soldiers” were conducted on the basis of units of central subordination. This innovation is appreciated by experts.

About 250 sergeants and petty officers from all higher education institutions and districts, including the Crimean Republic, were brought to the training camps.

A welcome speech was made by the former 1 deputy. The Ministry of Internal Affairs of the Russian Federation - Commander in Chief of the Army General of the Army N. Rogozhkin, who was recently appointed head of state to the post of plenipotentiary representative of the president in the Siberian Federal District. He brought to his subordinates that the Commander-in-Chief of the Russian Armed Forces approved a new program for the recruitment of explosive units, which provides for the formation of units solely by "contractors."

Noting the work in this direction, the commander-in-chief noted that more than 2 \ 3 of the official staff of explosive forces units had already been filled with specialists of this level. The next stage is the organization of the learning process, the creation of acceptable material and living conditions for the normalization of the process of operational and service activities. At this stage, it is planned to raise the role of sergeants and sergeants to solve these problems.

In order to achieve the main goal of instructor-methodical gatherings, the participants were divided into groups depending on HEIs, the groups were formed taking into account the main specialties of the escort troops of Russia.

In the course of these gatherings, representatives of units and institutions visited OOMSDON units, a training unit in Elektrostal and the Center for the Internal Troops of the Ministry of Internal Affairs of the Russian Federation in Lunyovo (Moscow region), which is engaged in training security professionals for sensitive sites. Here, in addition to the internal service activity, the participants of the collections were shown the newest types of special weapons and equipment for the needs of the internal troops, which are supplied for government orders for the needs of law enforcement units.

As a result of these classes, a scientific and practical conference was held, where an exchange of views on all issues between the leadership of the Glavka and junior commanders took place. The main topics for discussion were the problems of internal service and domestic security of servicemen, which are quite acute on the agenda and cause fair criticism from the "contract servicemen" of the Ministry of Internal Affairs. This was quite clearly stated by all the speakers.

During the speech, sergeants and foremen covered issues related to the implementation of operational search tasks, improving classroom training and expanding the functions of junior commanders in everyday military everyday life.

According to the results of instructor-methodical studies, the results of the past fees were positively assessed, it was decided to hold such quorums on the basis of districts and connections.

In conclusion, the Chief of the General Staff, Colonel-General S. Bunin, spoke on the results of the classes. In the speeches of military prosecutors and the administration for work with personnel, an analysis of the state of disciplinary practice was carried out, which still does not meet the realities of the current situation in the country and the rule of law in the internal troops, which is the problem of today. The head of the training, General of the Army N. Rogozhkin, summing up the innovations, positively assessed the new form of command and personnel interaction and determined that the goals set by conducting this type of occupation were achieved and the implementation of the plans was quite tangible.
Ctrl Enter
Noticed oshЫbku Highlight text and press. Ctrl + Enter
We are
Officer diploma deprived of state prestige
Military Reviewin Yandex News
Military Reviewin Google News
24 comments
Information
Dear reader, to leave comments on the publication, you must sign in.