Terrorist attack on the pipeline as the cost of feudalism? 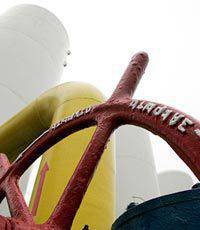 Against the background of round-the-clock reports on how ATO is going in the east, it somehow got lost news from the Ivano-Frankivsk region - about the explosion of the Urengoy-Pomary-Uzhgorod gas pipeline section. Explosions, as it turns out, there were three. And the SBU already qualifies them as a terrorist attack. The reason is unknown. But informally they say that this is the trick of the locals. Not separatists, but sincere patriots, and not so much Ukraine as a whole, but their own village in particular. Allegedly, they want to pay for the transit of gas through their territory directly to them. To consider such a desire as an anecdote could be until the end of last year. Now it is one of the problems generated by the tectonic processes of "feudalization" of the country.


Once again about the state of emergency in the Carpathians. As reported by news agencies, on May 12, in 19: 45, during works to eliminate the consequences of a gas leak on the Urengoy-Pomary-Uzhgorod gas pipeline in the Rozhnyatovsky district of Ivano-Frankivsk region, an explosion occurred in 30 meters from the Bogorodchany-Dolina gas pipeline ( diameter 1400 mm, pressure 50-54 Atm.). Victims and no victims. Later, the governor of the Ivano-Frankivsk region, Andrei Trotsenko, said that there were three explosions on the gas pipeline. And all three are planned.

The SBU has already opened criminal proceedings on the fact of the explosion, qualifying it as a terrorist attack. This is stated in the press service of the prosecutor's office of Ivano-Frankivsk region. Production is open under part 2 Art. 258 of the Criminal Code of Ukraine (terrorist act). And the message of the prosecutor's office of the Ivano-Frankivsk region said that the explosions occurred in different parts of the pipeline, their cause was laid explosives, and now "all the necessary investigative actions are being carried out, the circle of persons involved in the crime is being established."

The main gas pipeline is now guarded in an enhanced mode. Employees of the regional forestry and hunting management were also involved in protection. The local government, under the pretext of preventing new terrorist acts, creates its own battalion of the type "Dnipro" and "Donbass". As Andrei Trotsenko stated, “our task is to make a full-fledged unit based on the territorial defense battalion. This is the battalion that will ensure law and order in the territory of our region and will take upon itself the opposition to such terrorist acts. ”

The fact that the Carpathian region creates its own armed forces, quite logically fits into the context of the current situation. This is the trend of the moment. Bad is the governor, who does not have his own army. Not just bad, but a goof. Because at any moment, specially hired separatist raiders can visit its territory, for which either the National Guard from the center or (perhaps worse) some home troops of another governor will be sent. For example, Dnepropetrovsk. And they can, out of old habit, take control of not only military facilities, but also civilians. Mostly commercial. And then accidentally rewrite them into their structures.

Therefore, the army of regional subordination is needed by all. A tourist Transcarpathia and Transcarpathia, with its sharply rising in price after the separation of the Crimea, the land is needed threefold. And in this regard, the explosions that were planned, as Governor Trotsenko said, “which were aimed at disabling the international gas pipeline,” turned out to be very useful.

But, in addition to the version that the attack in Rozhnyativsky district is a cleverly played play, there is another opinion. He was expressed to us by representatives of local businesses, who, due to Ukrainian specifics, are connected by many years of mutually beneficial friendship with local law enforcement officers.

According to them, there are no separatist sentiments in this area, and everyone loves “Nenko Ukraine”, but there is a clearly expressed desire of the population to get some dividends from state revenues. Take the same pipeline. Why should he pass by free of charge? And who will pay the local community for the inconvenience? For environmental risks? For moral suffering because for many years the gas monopolists used their territory for their pipe for free? If you want your super pipeline to pump gas from Urengoy to Europe, pay local gas stations, and they will guard your pipe from neighboring gas stations with the whole battalion.

Again, there is such a thing as international roads. The so-called transport corridors. It’s not for nothing that they say that Ukraine has two competitive advantages: agriculture and geographical location.

In general, we are well located, you can dream of becoming an international transit center. We, in principle, did just that. Dreamed of. Without going from dreams to practice. Because in practice, everything is much more complicated and expensive. It is necessary to spend money on the construction and reconstruction of roads, to create a roadside infrastructure. But how to do it if there is no money? And those that stand out are stolen faster than literally they can roll them into the asphalt.

In due time, it was planned to attract 16 billion UAH for the program of development of the national network of international transport corridors within five years. (according to the hryvnia exchange rate). And they even tried to start work on the third international transport corridor Berlin – Lviv – Kiev. And at the expense of the European Bank for Reconstruction and Development, they even carried out the reconstruction of the Chop – Stry highway. Then something was patched up by Euro-2012 and calmed down on that.

Now the question of the transit status of Ukraine has somewhat lost relevance, since only an avid adventurer will send cars with valuable goods to a country that is blocked by roadblocks. And some have already taken a fare for a long time.

It started from the very final of the “Battle for Kiev”, when, according to the resolution of the Verkhovna Rada, regional special forces units were withdrawn from the capital, and the local population stopped their buses with soldiers and “Berkut” with bats, torches and hunting rifles, took the breech gear, put it all on himself over the "sportswomen" and inspected the vehicles passing by. Many people then lost cash, credit cards, valuables, and even cars. The revolution, she, you know, is not done in gloves.

Now the useful experience of patriots Maidan adopt Eastern separatists. The people said that in Konstantinovka set the fare for the checkpoint - 2000 UAH. Approximately for the same amount you can call the police. Then your money will go to imitate the vigorous activities of law enforcement.

Generally, when the “One Country” is being repeated on TV as a prayer, and the politically anxious part of the population is chanting “Holy and Holy!”, I understand that we are really “once”. Because the main unifying force of our people is ideas. Ideas, how to make money out of thin air, and also to pull it out of the "random aliens".
Suffice it to recall how Chevron famously bred the regional councils of Ivano-Frankivsk and Lviv regions, "populated" by the deputies from Freedom, for "local investments" of a compulsory nature. They heroically defended the Oleskoe field from Western investments, and even the figure of $ 25 billion in total investments that the company allegedly intended to invest in the development and production of gas from shale rocks did not melt the hearts of the deputies. They wanted additional infusions to “drip” exclusively into those places that are of commercial (or electoral) interest for them personally. Chevron had to give 10 mln. for environmental monitoring of shale gas production on Olessky Square, and around this money unhealthy fuss of food and gas started immediately.

The Eastern Ukrainian brothers of the Galicians behaved in the same way. Shell company, which installed its tower in Pervomaisky district of Kharkiv region, near the village of Veseloe, did not know how to protect it from the machinations of local activists. But after she paid 50 thousand UAH. lease landowner share, who was in the area of ​​drilling, everything fell into place. The company’s management only managed to sign payments, spending light and gas in the villages, setting up swings in playgrounds and providing various similar services to local authorities.

In principle, every investment project in our country is not complete without the “social raiding” of local authorities, which are seeking to remove some sums from businessmen in their favor. And sometimes - even for the benefit of the community. And long before the revolution, ideas on this subject were constantly cultivated by all local councils.

In Kiev, for example, they wanted to make a paid entry into the city center during the daytime. In some cities, they introduced a tourist tax or made additional contributions to businesses in the local budget for the implementation of certain types of business activities. All this is fairly standard for world practice.

But the process of dividing Ukraine into “feudal zones” exaggerated the traditional rules of the game. Everywhere they talk about paying for the opportunity for some oligarchs to conduct business, to transport products or raw materials through the territory of others. The fact that the safety of commodity parties is provided by specially trained people from illegal military formations of various kinds, depending on the “geography”. And for a quiet business without unpleasant "unexpected", you also have to pay a revolutionary tax.

And all this turns into a system of parallel taxation, which neither the fiscal department, nor foreign consultants, nor even the special services can handle. Or do not want. In any case, free of charge (especially the special services). So, I am afraid, not only amateur explosions on the gas pipeline, but also more serious measures are waiting for us. The cost of feudalism, if I may say so ...

Ctrl Enter
Noticed oshЫbku Highlight text and press. Ctrl + Enter
We are
The world we leave, the world we enter, and the world between themAbout Stalin and Khrushchev
Military Reviewin Yandex News
Military Reviewin Google News
52 comments
Information
Dear reader, to leave comments on the publication, you must sign in.