Ecology in the army, problem to be solved 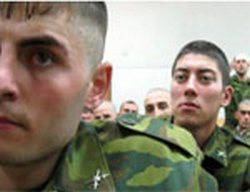 Information leaked to the masses, allegedly coming from very competent and trustworthy sources, that in a short time the whole appeal, recruited from the regions of the North Caucasus, would be linked closer to each other to create parts consisting entirely of Caucasian individuals. All this will be carried out in order to avoid the formation in the main detachments of military units of criminal groups organized on the basis of the usual, already considered to be an inevitable phenomenon in the army, dedovshchina of people who are uncle uncles, brothers in the seventh knee and similar relatives. True, the top leadership of the armed forces of the Russian Federation categorically rejects such a development of the situation with draftees. But the information from separate sources, coming from military personnel of various ranks and ranks, again makes the public puzzled to head for a massage to all the well-known part of the skull. Part of the military claims that people of Caucasian nationality will call for service in the army of the Russian Federation many times less, some say the exact opposite, that the number of Caucasian guys in the Russian army will be increased.

Infinite misinterpretations around questions relating to the recruitment of newcomers from the Caucasus, tried to dispel the General Staff of the Russian Federation. Vasily Smirnov - Deputy Chief of the General Staff, Colonel General - made an official statement in which he said that young people of Caucasian nationality, as before, will be called up for military service in accordance with current legislation. According to him, no one spoke about the creation of mono-ethnic formations and did not intend to create such units. Also, the Colonel-General noted that “close to” the house they serve, and even then not always, soldiers with families, or guardians of children, or with the care of elderly parents.

All this "opacity" in the situation with recruits-Caucasians became even more clouded due to the fact that the number of draftees from this region has really decreased. Therefore, the media immediately tied this fact to numerous recent cases of violation of the charter, which occurred on the basis of ethnic conflicts, often caused by Caucasian military personnel. The fact that such situations were indeed recorded was often reported by the military departments themselves and the media from the regions.

In order not to be unfounded, I would like to remind you that at the end of March of the current year, more precisely, 25 numbers, at the meeting of the board of the Chief Military Prosecutor’s Office of the Russian Federation, the Chief Prosecutor S. Fridinsky announced that in some districts “national gangs” were formed among the ranks of the RF military. Moreover, it has been observed that the majority of Caucasians-draftees are formed by certain individuals into clans with their own hierarchy even before they arrive at the place where they should perform military service.

The following month, Nikolai Zakharov, a representative of the Chelyabinsk Military District, “clarified” the situation around Caucasians recruits by saying that now young Caucasians who have reached the age of conscripts living throughout the territory of the Russian Federation will not be called up at all. He tried to confirm his words with an existing order allegedly issued by the General Staff of the Defense Ministry of the Russian Federation. The Defense Ministry in response stated that Zakharov misinterpreted the orders of his superiors.

True, for the media, Zakharov’s statement was enough for the masses to actively report that a mass reduction in the number of young draftees from this country came to the Dagestan Commissariat. Specific figures were also indicated: out of the planned several thousand Dagestan recruits, the military registration and enlistment offices were supposed to call only four hundred people.

When the Defense Ministry refuted this information and “made happy” the Dagestan guys that no one, in principle, was going to cancel the mass conscription of new recruits in Dagestan, and besides the planned several thousand conscripts would be called fifteen times more, the media exploded in a flood of words. Now the mass media have "uncovered" the secret plans of the Ministry of Defense of the Russian Federation to create "legions" with absolute Caucasian composition.

Of course, seeking help from historical literature, we will find confirmation of the existence of military-specific units composed of military units originally originating only from the Caucasus region. Such a practice was observed in the troops both under the tsar-priest and during the Soviet era, and such detachments also performed their service, I must say, specifically. The combat effectiveness of such detachments has always been at a high level, but with discipline in them things were not well. In addition, there are numerous facts that in the years following 17, for a long time, such units fought both with the “white” units and with the “red” only for their own interests.

However, in fairness, it is necessary to mention the mass desertions of detachments formed only from persons of Baltic origin. During the years of the Great Patriotic War, several such cases were registered, when whole military corps went over to the side of the fascists. For this, apparently, the Baltic peoples suffered from Stalin, when in retaliation for the betrayal and desertion of several military groups, he staged a mass repression of ordinary, civilians of these nationalities.

Whoever forgets the most important historical lessons, fate will make them pass again, but in their own skin. Therefore, having a "bitter" experience with military units, formed entirely from individuals of one, "unstable" nationality, you should not step on the same rake again. Moreover, suddenly one of the military officials again misinterprets the order received from above and sends such units to one of the geographical points where clashes are guaranteed between the local population and those serving in the service. The outcome of such a “smart” decision can turn out to be bloody, and the possibility of insurrections among the personnel in such units has a significant positive coefficient.

Last year, something similar was observed in one of the military units of the Perm Territory. More than a hundred people, Caucasians by nationality, refused to obey their command. The commander of the unit, Dmitry Kuznetsov, decided to apply for help to the Spiritual Administration of the Muslims of Kama Region, in order to resolve the conflict as painlessly as possible. The case is so unprecedented, but visual.
Several cases that occurred in the summer of 2009 and 2010 in the Baltic are also talking about the unacceptable manifestation of fraternity and hazing in the Russian troops navy.

In each of the situations, it is depressing that the discovery of such blatant violations of the statute and human norms of behavior was completely random. Do not leave as a memory one of the “thoughtful” servicemen a photo depicting the word “KAVKAZ” composed of the bodies of beaten colleagues, or did not post one of the same clever videos on the Network, on which a major scuffle between Caucasians from Dagestan and other nationalities was filmed , the leadership of these military units would remain in ignorance. It turns out that commanders, political leaders and people with similar posts do not fulfill their direct duties - what each soldier breathes and what the general situation in the unit is - do not fulfill and cannot control relations in units.

In conclusion, the idea suggests itself that in order to avoid such situations, in the future it is necessary to form parts so that they consist of people of different nationalities, without any one prevailing. In order to know well the situation inside a separate part, it is urgently necessary to increase the sergeant staff, who can significantly help in recognizing such sores as inter-ethnic discord among the younger servicemen. Hope that all the representatives in whose veins flows very hot blood can be sent away to serve in the garrisons specially created for them, where they can easily turn into another movement of terrorists fighting for the rights of “enslaved” , dangerously.
Ctrl Enter
Noticed oshЫbku Highlight text and press. Ctrl + Enter
Military Reviewin Yandex News
Military Reviewin Yandex Zen
Add a comment
Information
Dear reader, to leave comments on the publication, you must sign in.