Why is Moskal true? 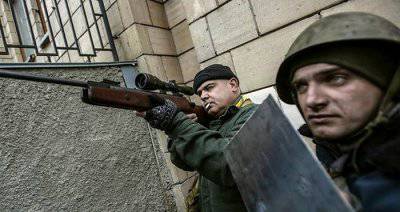 "Captain, I came to say goodbye
with you and your ship "


The investigation is actually over. "Golden eagle" did not shoot people on Independence. The deputy head of the parliamentary committee on the fight against organized crime Gennady Moskal treated the Ukrainian media with such a statement. He also admitted that among the gunmen “There are no citizens of Russia! Neither Kazakhstan, nor Uzbekistan, nor Paraguay, nor Uruguay! ”(Quote).

Oh, Mr. Moskal ... Well, why is that? Remember how just three months ago you were screaming at the whole world about GRU saboteurs and FSB special forces. Forgot? Why should I?

On the one hand, the truth seemed to triumph. One side. But each medal has a second side. Recently, Mr. Moskal has made several statements in the direction of those for whom he works. And for such statements some time ago he could be safely sent to his friend Sashko Bilom. And now even get away with it:

“Not the army lost part of Ukraine! Diplomacy lost to Crimea. ”

“Mr. Deschitsa (Acting Minister of Foreign Affairs) we have a diplomat of the level“ to open the doors to the embassy ”.

“They created the National Guard for one purpose: to solve the problem of Maidan. What to do with him? He will never break up! His life will now have to contain any power. Therefore it was necessary to stick these people somewhere. They created a guard for them. But how will this whole idea end? Already over - a complete fiasco! ”

“As for Nalyvaichenko and Avakov, they do not want to surrender participants, organizers of bloody events, including on the Maidan. That says it all".

What is it? Sudden epiphany? Awakened civil conscience?

Not. This is fear.

This is the feeling of an imminent end coming.

The Batkivshchyna party is similar to Titanic. The orchestra conducted by Yatsenyuk and Turchinov still plays on the upper deck, the insane captain still gives out insane commands (this is me about her decree banning Putin from flying to Kaliningrad), but ...

I saw sharks behind the farm
sharks swallowed saliva
captain, all sharks are in the course
that we will soon go to the bottom ...

Sharks in the know. The sharks represented by the EU and the USA (read, Berlin and Washington) have already chosen the new president. Poroshenko. It is indisputable.

Turchinov declares that "after the elections, no politics, I leave." My free translation - begged for loans, money stibri, tear claws.

So Mr. Moskal begins to violently criticize their own. In the hope that sharks will appreciate it and will not eat it. Well, blessed are those who believe ... Those who come to power on May 26 are not like a rabbit and a piggy bank. Only a very naive person can count on the mercy of such organisms as Poroshenko and Nalyvaychenko.

Yes, and they are unlikely to like these passages.

“Titanic” of the “Batkivshchyna” party enters the home stretch.

Mad Captain Tymoshenko declares that if Poroshenko wins, she will arrange another revolution. What are the forces that support it? She probably means hundreds of self-defense Maidan, who are now tusit in the National Guard under. But the question is, will her former supporters want to go back to the Maidan? They are well fed from the hands of the Ministry of Internal Affairs. If they want, Kiev will have fun days ahead.

and the judge says the whole thing is in the law
and the priest is the thing of love,
but by the light of lightning it becomes clear:
each hand has blood

Ten days separate the Batkivshchyna party from the final and inevitable collapse. Those at the helm are well aware that they will hang everything. All the failures of their short reign. It so happened that the guilty should always be.

In this situation, it is a pity for me that the sharks will tear them, and not those who really have to do it: a devoted, sold, deceived Ukrainian people.

Ctrl Enter
Noticed oshЫbku Highlight text and press. Ctrl + Enter
We are
Results of the week. “I respect you, and you respect me, we are dear people”Behind the Scenes of the GRU
Military Reviewin Yandex News
Military Reviewin Google News
87 comments
Information
Dear reader, to leave comments on the publication, you must sign in.