In our souls is empty and sad


The events in the Crimea and in Ukraine somewhat distracted the attention of the media from another problematic region located between the Black and Caspian Seas. Today in Ingushetia is quite peaceful - it's time to understand the deep-rooted causes of disasters that have befallen this once blessed land.

The stanitsa of Ordzhonikidzevskaya, before 1957, was called Sleptsovskaya. Now it is the administrative center of the Sunzhensky district of the Republic of Ingushetia. According to the latest census, a little over 500 people live in the village, which is less than one percent of the population. Here is the only Church of the Protection of the Virgin in Ingushetia. For nearly forty years, his prior was a famous ascetic and confessor of Orthodoxy, Archpriest Peter Sukhonosov.

The founder of the Cossack villages of the Sunzha Nikolay Pavlovich Sleptsov - a native of Aktarsky district Saratov province, one of the most brilliant officers of the Caucasian corps. Within a few months after arriving in the Caucasus, he received the Order of Stanislav for participation in the Nizhny Novgorod Dragoon Regiment in a case against the Highlanders 30 of June 1841. 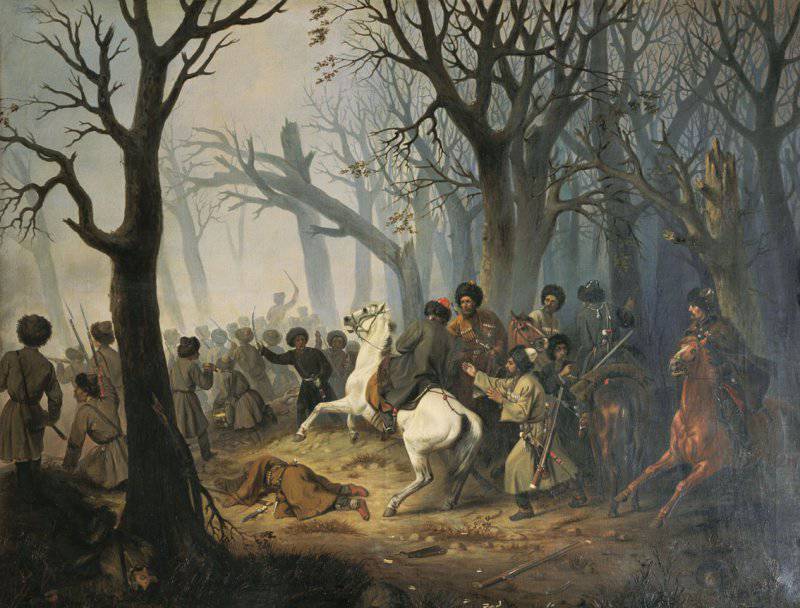 Alexander Kozlov. "The death of Major General Sleptsov battle on the bank of the river Tekhi 10 December 1851 of the year"

The following year, the Blind Men volunteered to participate in the de-blockade operation of General Passek, who had been besieged by the highlanders for more than a month in the fortification of Zyryana. Having led the battalion of the Absheron regiment, Ensign Sleptsov was given the task of knocking the enemy down from heights in order to clear the way for the troops. With a sword in his hand, in front of everyone he took off on a steep height up to 300 meters and, despite a whole hail of bullets falling from above, reached the positions of the Highlanders, pushing them from there. For the difference shown to them in this battle, Sleptsova was fired into the majors.

In 1844, Nikolai Pavlovich took part in an expedition to Malaya Chechnya under the command of Adjutant General Neygardt, and in January 1845 was appointed commander of the 1 of the Sunzha Linear Cossack Regiment. In this troublesome position, he began to engage in the founding of Cossack villages. Reflecting the highlanders' raids, he managed to conquer the communities and tribes of the militant Galashkins and Karabulaks. “Each blow to Sleptsov,” wrote one of his biographers, “hit the target directly and shook Shamil’s power and faith in his power.”

For a successful assault on the Chechen aul of Shauden-Shari, the Blindmen was promoted to lieutenant colonel. Acting always exceptionally decisively and bravely, he repeatedly thwarted the plans of Shamil, who wanted to penetrate into Kabarda. In May, 1847 won another victory over the Chechens on the shores of Assy, for which he was promoted to colonel and was awarded a golden saber with the inscription “For Bravery”. October 14 of the same year made a successful attack on the villages of Karabulak, who constantly disturbed with their raids the Sunzha Line.

In 1850, Sleptsov also conducted several successful operations against the Highlanders, destroying the fortified enemy line, which consisted of strong trenches and debris. This line was arranged by Shamil to prevent the sudden attack of the Russians on the capital of Vedeno. Although this strengthening was outside the zone of the Sunzhensky line, Sleptsov, during a personal meeting with the new commander-in-chief of the Caucasian corps, Prince Vorontsov, managed to get permission after a lot of persuasion to try to take it. Without giving the three thousand Highlanders exposed by Shamil to muster their strength, he broke them in parts, losing only three Cossacks. For which he was promoted to major general.

The last victory for Sleptsov was a battle on the bank of the River Gekhi 10 (22) December 1851. Throwing two hundred Cossacks into battle, he was in front of huge rubble. The enemy hiding behind them opened heavy fire. Nikolai Pavlovich ordered the infantry to move forward, which began to push the Highlanders back. At that moment an enemy bullet hit him in the chest. He died half an hour later. He was buried with all military honors at the cemetery of the village of Sunzhenskaya founded by him.

Today this cemetery is overgrown with weeds. Welded metal crosses, designs over the graves are evenly painted with blue or green paint, which leaves no chance to make out the names and surnames of the people resting under them. The memory of them was destroyed not by the omnipotent time, but by the decision of someone from the local administration, made, probably, on the eve of the next community work day.

I could not find Sleptsov's grave.

The memory of him was betrayed by the descendants of those for whom he, risking his life, was cut with the mountaineers, set and defended the village, gaining fame for the sovereign and the Cossacks.

It is known that in the Caucasus there is a cult of heroes. With the filing of Yunus-Bek Yevkurov in honor of the Ingush, who faithfully served Russia, two years ago, a Memorial of Memory and Glory was erected. On the granite slabs, the names of all the 27 full Ingush cavaliers, bravely fought as part of the Caucasian Volunteer Horse Indigenous Division, are stamped out. Here is a monument to the riders of this famous compound. On the stele dedicated to the participation of the Ingush in the Great Patriotic War, the names of the natives of the Chechen-Ingush Autonomous Soviet Socialist Republic honored and presented to the title of Hero of the Soviet Union are stamped. A separate monument is perhaps the last defender of the Brest Fortress, Senior Lieutenant Umat Giray Barkhanoyev.

The names of the Ingush who contributed to the protection and prosperity of their native land and people - Bazorkin and Borov, Malsagov and Nalgiev, Bekmurziev and Pliev named the streets of the new capital of the republic - Magas. This is all part of a general program, conceived and planned by the head of Ingushetia Yunus-Bek Yevkurov in order to raise the spirit and rally the nation.

There is no reason to accuse the Hero of Russia of inciting nationalist or chauvinistic sentiments. Remaining the son of his people and a Muslim, Yevkurov does what the national leader should do in his place. It was not his fault that the monument to General Sleptsov was destroyed in the village during the Soviet era, they ruined his grave and that the village itself still bears the name of the person responsible for the Cossack genocide.

Not he, but we, the Russians, have betrayed our heroes and leaders to oblivion and ridicule. In our souls it is empty, bare and depressing, like on a pogost or in a seedy provincial town with typical Ilyichs on the main square and the same streets.

Pokrovsky temple in March of this year became a monastery. Today, perhaps, this is the last and only stronghold of the Russian world on this earth. Larger than the numerous but temporary group of federal and Interior Ministry forces stationed here.

“We don’t know what awaits us tomorrow,” said the rector of the temple, Peter Sukhonosov, in one of the sermons. - Maybe even more troubles and grief. And we begin to blame someone, look for the guilty: they say someone is to blame. Actually we are to blame. All of this is God's allowance, the allowance that happens to us, the sons of Russia, for our sins, for our iniquities, for our removal from God. We must constantly stand on the right path, not lose heart ”.

28 March 1999 of the year - 15 years ago, Peter Sukhonosov was kidnapped right from the temple. Unidentified people took him away to the then independent Ichkeria, where the 70-year-old father was martyred.

Ctrl Enter
Noticed oshЫbku Highlight text and press. Ctrl + Enter
We are
Cossacks in the Civil War. Part I. 1918 year. The origin of the white movementLife of the Yenisei province of the late XIX - early XX century
Military Reviewin Yandex News
Military Reviewin Google News
11 comments
Information
Dear reader, to leave comments on the publication, you must sign in.