Small weapons for a large army

16 May 2014
52
This article provides an overview of the various types of infantry weapons used by the armed forces of the People’s Liberation Army of China. Most of the photos presented in this article demonstrate the armament of PLA units located in Hong Kong. 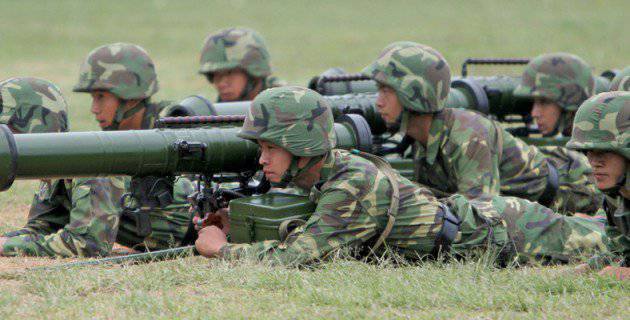 Hong Kong returned to the fold of mainland China 1 July 1997 of the year and is a region in which carefully selected PLA soldiers serve, ranging in number from 4 to 5 to thousands of people. Of course, this is not a very large contingent in comparison with the total number of the Chinese army, but it should be understood that these servicemen are a symbol of China’s political and military power. Probably, therefore, units located on the territory of a special administrative region, which is Hong Kong, are among the first to receive the latest weapons.

The gun QSZ92 manufactured by Norinco Corp. is a standard semi-automatic pistol used by the PLA since the end of the 1990-s. It is believed that work on it began in the year 1994. There are two versions of this gun, QSZ92 -9 chambered for 9 × 19 mm Parabellum and QSZ92-5.8 chambered for 5.8 × 21mm. The frame of the gun is made of polymer, automation works using the recoil energy in the short course of the barrel. Locking is done by turning the barrel.

The capacity of a magazine with a staggered arrangement of cartridges is 15 cartridges for the 9mm caliber and 20 for the 5.8mm caliber. Shock trigger mechanism double action. To mount a flashlight or laser pointer, the gun has guides under the barrel.

The 9 mm version of the pistol is designed for soldiers (for example, special units), and the commanders and officers are given the version for the 5.8 mm cartridge. The gun is widely used by the police in China. In addition to China, the gun is also in service with the People’s Republic of Bangladesh and Cambodia.

Silent submachine gun QCW05 designed for chambered caliber 5.8x21 mm and entered service with the PLA in 2001 year, after winning the competition for the replacement of submachine guns - Type 79 and 85. Externally, the QCW05 bears a resemblance to the Chinese QBZ95 assault rifle. The development of the submachine gun QCW05 was jointly carried out by the 208 Research Institute and Jianshe Industries Corporation located in Chongqing. The latter is part of the China South Industries Group. The QCW05 submachine gun was officially unveiled at the 2005 International Police Show in Beijing.

QCW05 is made according to the bullpup scheme and automatic with a free gate, shooting is conducted from the open shutter. In the design of the butt used polymers. A submachine gun can shoot in single, in 3 bursts and shot and automatic modes. Shop 4-x in-line and is designed for 50 cartridges. Similar to a Type 95 rifle, magazine extraction is possible only on the right side, which creates some inconvenience for left-handers. The rate of fire of the submachine gun QCW05 is intentional, understated in order to improve the control when shooting. Target folding.

In the PLA, the QCW05 submachine gun is designed for ground and air transport crews. The compact dimensions make the QCW05 convenient for use in confined spaces, such as inside a car. Of course, the QCW05 is also designed to arm the special forces, hence the use of a removable silencer. For silent shooting, the subsonic cartridge 5.8 × 21mm DCV05 is also used.

There is a version of JS chambered for 9 mm, which is used mainly by the military police. The JS submachine gun has a magazine capacity designed for 30 cartridges. Performed without a silencer, the submachine gun is designated QCQ05. 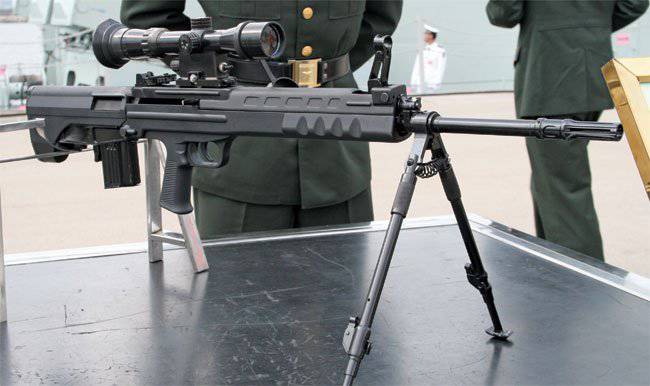 QBU88 semi-automatic sniper rifle caliber 5.8 mm is similar in purpose to the domestic SVD and the American M110. This weapon is one of the first that was created by Chinese gunsmiths, chambered for 5.8х42mm. Judging by the designation Type 88, the rifle was adopted by the PLA, somewhere at the end of the 1980-x or in the subsequent period.

The QBU88 sniper rifle is used by both PLA units and the Chinese police. 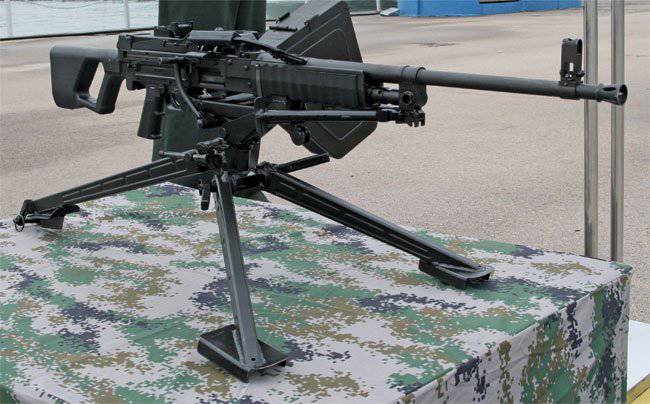 Despite its designation Type 88, the machine gun entered service with the PLA at the beginning of this millennium. It is alleged that this light machine gun from Norinco’s storerooms is not very popular among the troops, yielding to its predecessor who used more powerful 7.62x54R cartridges. The new machine gun, being lighter than the 67 Type machine gun, is significantly heavier than its foreign counterparts, such as the FN Minimi.

The QJY88 machine gun uses gas automatics with a long stroke gas piston and easily replaceable barrels. The power of the machine gun comes from a plastic box, installed on the left side in which the tape on 200 cartridges is laid. 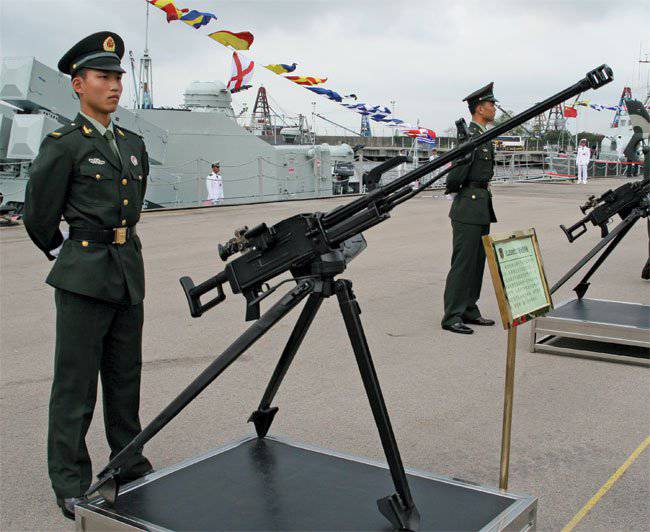 The QJZ89 heavy machine gun, chambered for the 12.7 caliber mm, is the Chinese equivalent of the M2. 50 machine gun of the caliber widely used in NATO. The machine gun is designed for use in infantry orders, and for installation on equipment. In addition, the machine gun can be used to defeat lightly armored vehicles and air targets. The standard calculation of the machine gun consists of three people, and it is in service with the battalion or company level.

The QJZ89 machine gun was first introduced to the public in 1997.

The development of an automatic grenade launcher for the needs of the PLA began in the 1980-s by the Chinese corporation Norinco at the end of the 1980-s, relying on the achievements of the Soviet gunsmiths in creating the AGS-17. As a result, in the middle of the 1990-ies, a variant of a grenade launcher under the designation W87. On the basis of this development, an automatic QLZ87 grenade launcher was created, which became the first weapon of this type adopted by the PLA. He became an infantry fire support weapon at the level of a platoon and company.

The designers tried to make weapons as easy as possible, even to the detriment of firepower. It is for this reason that the grenade has a rigid locking of the barrel with the help of a butterfly valve, and the automatic grenade launcher's gas-discharge automatics are similar to the M16 rifle when the powder gases directly interact with the bolt group. This reduces the number of moving parts, which leads to weight reduction. Also, to reduce the weight of the designers refused to tape power in favor of the store.

QLZ87 can be used by one soldier with a bipod or calculating with a machine. If the machine is used, the grenade launcher can turn 360 degrees and the elevation angle ranges from -10 to 70 degrees, which theoretically gives him the opportunity to fight low-flying aircraft. The standard sighting device is a 3-x optical scope. The QLZ87 grenade launcher is also installed on vehicles and boats.

Depending on the type of target, the grenade launcher can be loaded with 35x32mm high-explosive fragmentation, cumulative, incendiary and smoke grenades. The rate of fire reaches 45 minute shots. Grenades are loaded into 6 or 15 charging stores. 35 mm grenades, weighing 250 grams, have a larger radius of destruction (10 meters declared) and armor penetration (up to 80 mm) compared to the 40mm grenade of the American McNXX grenade launcher. 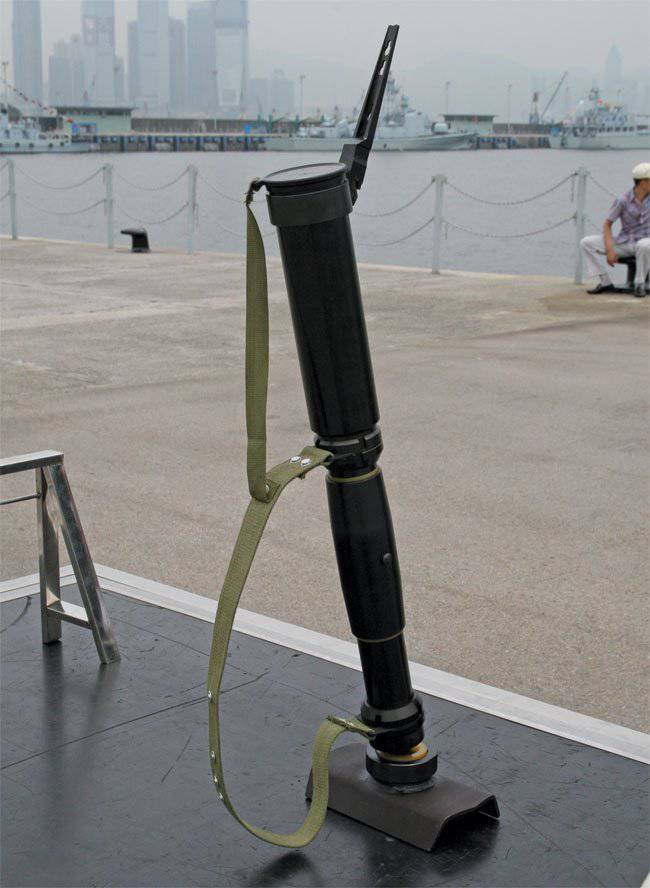 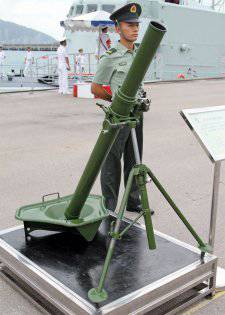 82 mm mortar PP87, manufactured by Norinco Corporation, has replaced the mortar Type 67 (Type 67). The mortar is used at the battalion level and can fire with three types of ammunition - high-explosive, smoke and light. 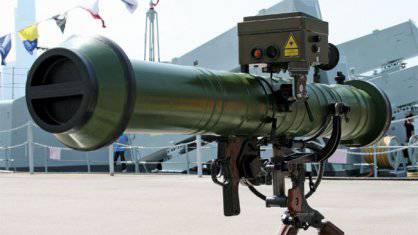 The last on our list is the Norinco Corporation anti-tank rocket launcher, which replaced the obsolete Type 78 and 65 recoilless guns. The development of these weapons began in the 1990s, as a result of which, the PF98 ranked between individual rocket launchers and more sophisticated anti-tank guided installations. For destruction tanks, armored vehicles, bunkers and fortifications used 120 mm rockets.

For the first time this weapon was demonstrated in the Macao garrison in 1999 year, and today PF98 is widely used in the PLA at the battalion and company level. 120 mm missile, can be high-explosive, or cumulative with the declared armor penetration in 800 mm. The cumulative missile weighs 6.3 kg and has a tandem warhead. The high-explosive missile weighs 7.5 kg and contains 120 steel balls and incendiary material that can penetrate 400 mm of armor (English text: "... 400 mm of armor").

In 2010, a modified version of the Hong Kong garrison was displayed under the designation PF98A. Visually, the new version features a modified fire control unit, which implies increased accuracy and fewer control buttons (12 instead of 25). In 2006, the rocket was also upgraded. According to the information provided by the PLA, the new grenade launcher has a 1.25 meter length and a weight of about 7 kg. Early launch tube made of fiberglass weighed about 10 kg.

The calculation of the PF98 grenade launcher can be from one to two people when firing from the machine or from the shoulder. From the moment a target is detected before a missile launch, 10 seconds are required, and in a minute it can be released from 4 to 6 missiles. In addition to China, the 120 mm rocket launcher PF98 purchased Bangladesh, Indonesia and Zimbabwe.