What every Russian should know when communicating with a Ukrainian 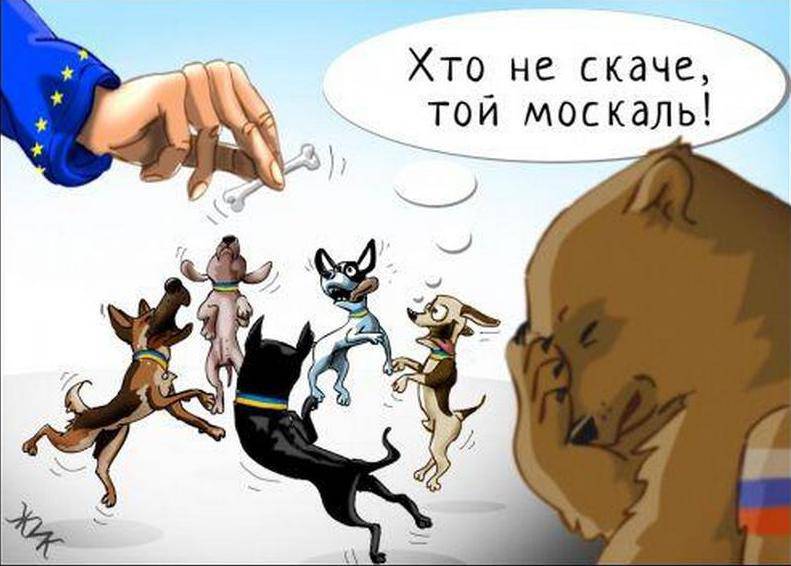 And now I would like to talk with you, dear compatriots, about a very important issue - how to communicate with Ukrainians.
Many of us, reading the statements of Ukrainians in the network, talking to them by phone or meeting in neutral territory, think that Ukrainians have collectively gone crazy.
This is not quite true. :)
Others think that all Ukrainians sold out to the State Department and the European Union without exception.
And this is not quite so! :)
And all those amazing skins about life in Russia, as well as no less amazing "letters from ordinary Russians who visited Lviv (Kiev, Ivano-Frankivsk) and admired what they saw" have a different explanation. I'll tell you now.

A quarter of a century ago, the average Ukrainian (that is, a resident of Ukraine) lived in the firm belief that he feeds, teaches and protects one-sixth of the world. Basically, of course, stupid Katsapov, but also wild chocks and Chukchi. In his system of the world, Ukraine itself swelled by territories, grew by factories and expanded by scientific institutions. From somewhere, like rain or snow, gas, oil, human and material resources came to Ukraine. It was natural and no one was interested in the sources. The Ukrainian knew that 1. He defended the USSR from the horrors of fascism. 2. He could not integrate into Europe as part of the Third Reich, because he insidiously prevented the USSR from representing Russia. 3. Ukrainians were exterminated by the Holodomor, they took away the territories, drove the fascists in the first rows and exiled them to Siberia. 4. Because now Ukraine has become so big, and there are so many Ukrainians.

(Of course, there were also normal Little Russians, if you will, Ukrainians. But it’s boring to consider themselves equal among many, where it is more fun to be both great and humiliated. For simplicity, those Ukrainians who chose this fate will continue to call them Ukrainians, hohkrakrams and others insulting words. Using ukrami of the words "quilted jacket", "kolorad", "katsap" and "moskal" gives us the full right to this. :))

... In general, the thinking of the average Ukra has always been schizophrenic. But the current peremoga of the brain is not explained by this, but by events of about twenty years ago.

So, about twenty years ago, when the Union collapsed and the Independence Square arrived, the average crest, who worked at the Very Important Nut factory, found that there was nothing to eat at home. For Nuts used to buy Moscow and screwed to some Secret Missiles, and now they give out wages to Nuts. Therefore, at home, from the food, only fat from the hog that the godfather stabbed, but for some reason there is no bread, although the Ukrainian was sure that the whole Union was feeding ...

So our conditional Ukrainian took the Bucket of Nuts, cut off the shmat of fat and went to Moscow to sell goods and buy wipes for the wife like Naina Yeltsin.

Shaking in the train and chewing fat, the crest drove to Moscow. The city was huge, dirty and unkind. A grim-looking man, picking his teeth with a folding knife, pointed out how to get to the factory for the production of Secret Missiles. On the way to the crest plant, the cops stopped three times and each ate some fat. Then the crest could not resist and played a thimble, losing all the hryvnia. Then he got to the factory - and there they told him that now the world was everywhere, the Secret Missiles were not needed by anyone, and Khokhol could screw himself on nuts ... wherever he wanted, let him go there.
Stunned hohloukr went to McDonald's and ate a meatball with a bun. From this monstrous food his stomach failed. He spent half a day in the station outhouse, where it was dirty, smelly and scary. In the booth on the left was widening dope. In the booth right fucked lesbian lesbians. From horror, the crest pulled a return train ticket into the hole and he was completely scared.
For the remnants of the money, the Ukrainian bought a tea from a broom and began wandering around the station, begging Christ to buy a bucket of Nuts from him.
Finally, some kind intellectual in glasses looked at the nuts, sighed, said: "Only out of respect for the Ukrainian people ... otherwise these Russians will torture you" and changed the bucket with Nuts to a ticket in the reserved seat to Kharkov. “You'll get there sometime,” he said.
Khokhol kissed the benefactor on the hollow cheeks and left the terrible terrible dirty Moscow, replacing the last fat on the Chinese skewers (collapsed, however, the next day).
Then, in Ukraine, everything was somehow not so good, but it took shape. Russia again began to buy nuts. The factory worked slowly. Kum fattened the new hog. Gas-oil continued to be taken from nowhere and why.
Khokhol sometimes recalled with horror his stay in Moscow, nervously drank a vodka, told young children about his experiences and was often baptized. TV cover helped him, every report from year to year, reinforcing the opinion: "In Russia, everything is bad!" Then the crest even went to Turkey - I liked it. And the plant manager went to Italy and said that it was even better in Europe. In the meantime, Russia was rustling around, shooting, quarreling, for some reason building something ... but the Ukrainian didn’t notice it.

And suddenly, after a nice traditional rally on the Maidan, after the post-rallies, after a normal, mundane explanation to the South-East that they were quilted jackets, colorada and cattle, oddities began.

Crimea suddenly took and went to Russia! But this can not be! Khokhol knows for sure that in Russia is terrible! So-take away the Crimea! Like a hog from a godfather, the Pravoseki soldiers took the other day out of the barn. So is the Crimea ...

And now Donbass and Lugansk! These terrible economic weight on the legs of the great Ukraine! Also want to select!

That writes our crest on the network. Indignant. Reproaches katsap villains. Burnt with malice. Grabs his heart, remembering the horrors of Moscow.

... Well, from Canada or Israel firmly supports his opinion an old acquaintance, a Moscow intellectual who once helped out a ticket to Kharkov. He has a small business there - a bucket of Platinum-Iridium alloy nuts served as a good starting capital. And he with all his heart for the independence and greatness of Ukraine.

And you say - schizophrenia ... on the content ...
It is necessary to be a Ukrainian writer writing in the Katsapa Move, so that the local oligarch will take you on content. Or by nature a schizophrenic, and without any proper medical care.

The majority of the population suffices a twenty-year lag from reality and a wonderful ukro-TV.