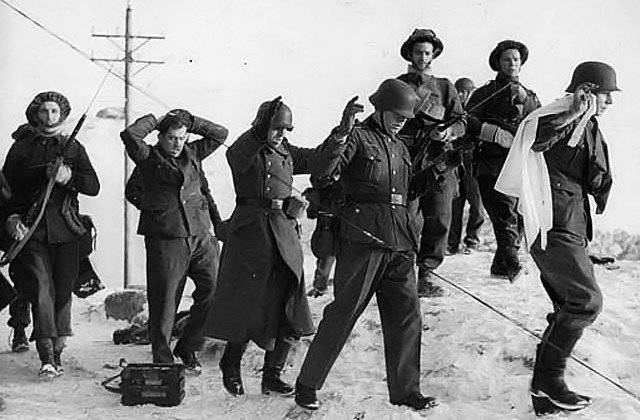 De jure, the Great Patriotic War ended on May 8 of the year 1945 Central European Time (The Second World War ended only with the signing of Japan’s surrender of 2 on September 1945 of the year). However, de facto battles with the Germans continued throughout the summer of that year, and the last German garrison surrendered only in September of the 1945 year.

For the USSR, the war with the Nazi gangs ended only in the middle of the 1950-s, when the last Bandera in Western Ukraine and the Forest Brothers in the Baltic States were liquidated. Thousands of servicemen and tens of thousands of civilians were killed in the battles with them. One of the last Nazi militants on the territory of the USSR was killed and only at all in the 1976 year - Khasukh Magomadov in Chechnya. Only from 1944 th to 1951 year did Magomadov's gang kill 33 party and Soviet workers. The last victims of Magomadov were the KGB lieutenant colonel GK, who was killed in 1974 in KNB, killed in 1976. Salko and squad Said Chabdarkhanov, mortally wounded in 69, during the detention of the XNUMX-year-old militant.

Battle of Berlin and the capitulation of Germany

On May 1 in 3 hours of 50 minutes, the Wehrmacht Army General Staff General Krebs arrived at the command post of the 8 Guards Army for talks. However, Stalin ordered not to negotiate, except for the unconditional surrender. The German command was given an ultimatum: if no agreement was given to unconditional surrender before the 10 watch, the Soviet troops would be hit. Requirements for surrender were rejected and Soviet troops in the 10 hours of 40 minutes opened fire on the center of Berlin.

On the night of May 2 in 1 an hour of 50 minutes a message was received from the Germans: “We send our envoys to the Bismarck-Strasse bridge. Stop military action. " By 15, the remnants of the Berlin garrison (134 000 people) surrendered.

Formally, the war ended precisely at this time - the night of May 2. However, the victory had to be consolidated legally. On the night of May 7 in the French city of Reims, an act of surrender to Germany was signed, according to which with the 23 watch of 8 in May fighting ceased on all fronts. 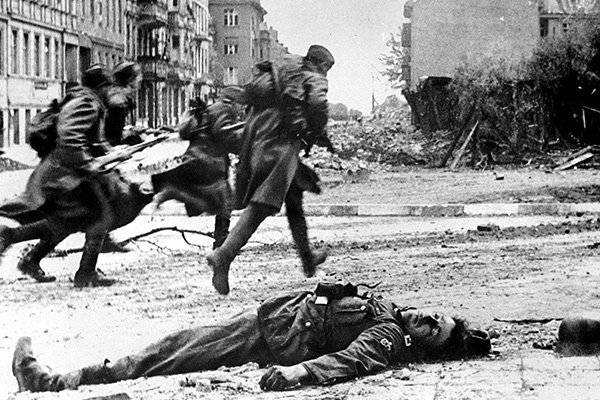 The “Rheim Protocol” stipulated that the act was not a comprehensive surrender agreement of Germany. However, the USSR put forward the requirement of unconditional surrender as the only condition for ending the war. Stalin believed that the Western allies could outwit him, especially since even then the Soviet intelligence reported on the British plan to start a war against the Soviets in the summer of 1945, including using the German units that had surrendered. Another reason for signing an unconditional surrender was that the Germans did not stop the final resistance on the Eastern Front.

At the insistence of Stalin, representatives of the Allies gathered again in Berlin and, together with the Soviet side, signed on May 8, 1945, another Act on the surrender of Germany. The parties agreed that the first act will be called preliminary, and the second - final. The final Act of unconditional surrender of Germany and its armed forces on behalf of the German Wehrmacht was signed by Field Marshal Wilhelm Keitel, Navy Commander-in-Chief Admiral Hans-Georg von Friedeburg, Colonel General aviation Hans-Jürgen Stumpf. The USSR was represented by the Deputy Supreme Commander-in-Chief, Marshal Georgy Zhukov, and the Allies, Chief Marshal of the United Kingdom Aviation, Arthur William Tedder. As witnesses were present the US Army General Carl Spaats and the Commander-in-Chief of the French Army, General Jean-Joseph Marie Gabriel de Latre de Tassigny.

The signing of the final Act took place on May 8 on 1945: 22 Central European Time (May 43 on 9: 00 Moscow time) in the Berlin suburb of Karlshorst. It is because of the time difference that Victory Day is celebrated in most Western countries on May 43, and in the post-Soviet countries - May 8.

But 8 and 9 May is not the only option for Victory Day. In Great Britain and the countries of the British Commonwealth this event is celebrated on 7 in May, however it is still associated with the 8 number - when a huge number of people gathered in London on Trafalgar Square and near Buckingham Palace, where King George VI and Prime Minister Winston Churchill congratulated the British from the balcony. In Holland and Denmark, Victory Day is declared 5 of May (the date of liberation of the countries from the Germans), and on the small island of Sark, lying in the English Channel and being part of Guernsey's crown English possession, Victory Day is 10 of May.

German Resistance after the Surrender Act

In the period from 9 to 17 in May, the Red Army captured about 1,5 million enemy soldiers and officers and 101 general on the basis of the Surrender Act (not only Wehrmacht military workers, but also collaborators from other countries, including former Soviet citizens , Hitler's minions - Cossack units and Vlasovites, about 200 thousand people). But active hostilities on the Eastern Front with the signing of the surrender of Germany did not stop. 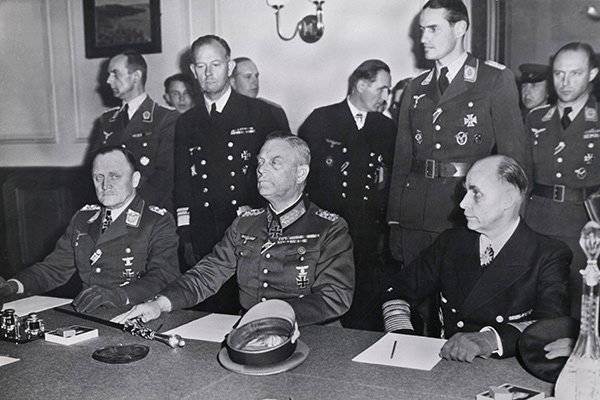 Only the 11 of May ended the Prague operation (some German units continued resistance until the evening of May 12). The liberation of Yugoslavia from the Nazis (not only Germans, but also Croatian and Slovenian units that fought for Hitler) ended on May 15. In these battles after 9 in May, several thousand Soviet soldiers were killed in Czechoslovakia and Yugoslavia.

The isolated resistance of the Germans lasted for about a month.

A Soviet veteran recalls: “We were transferred to Latvia from the Finnish border. They attacked Prekul, prepared for the final defeat of the Germans, but did not go on the offensive, we had already taken Berlin, and the sack remained, the Army Group Kurland, which the Germans planned to use to attack Leningrad, got into it. On May 9, the Germans surrendered, and on May 10 we were allowed to attack the remnants of the Vlasovites and the Greens (as the Latvian and Lithuanian Nazis called themselves. - RP). They fought well, saw how they chained themselves to machine guns. Anyway, they were dying. 12 of May reached the coast, to Tukums-Libau, Vlasov’s remnants tried to escape on water to Sweden and Finland ”.

Headed this German resistance in Latvia, Walter Kruger. “He used his last days, which he was destined to end in Courland, to save his Latvian combat comrades. Freeing them from their oath of allegiance, he supplied them with military uniforms and formed small groups of 10 people who leaked through the positions of Russian troops to continue the struggle in the depths of the forests of their homeland.

The group in which Uncle Kruger himself was located was discovered by the Russians 22 in May 1945 in the forest on the East Prussian border and blocked by them. Having shot all the cartridges of his pistol at the enemy, Walter Kruger was the last to stop his life, ”one of the participants in his commando group later recalled.

The most significant resistance of the Germans after 9 in May was on the Danish island of Bornholm, which lies in the Baltic Sea just north of Pomerania. Red Army units landed on the island, but in the command of the German part they believed that the British should accept the surrender of all units in Denmark. On May 10, the commander of the 25 of the thousandth garrison, Captain von Kampz, decided to fight the Red Army, at the same time sending a letter to the British command in Hamburg that "he is waiting for the British to land on Bornholm, and until that time he is ready to defend the Russians."

Three army officers arrested von Kampz of 11 in May and the bulk of the Germans capitulated. But 4 thousands of people continued to fight until May 19, until they were completely defeated. Hundreds of Soviet soldiers died in these battles for Bornholm.

This was not the only time that the Germans fought with the Red Army after the 9, only for the sake of the British, whom they intended to surrender. Moreover, in several places the British and Germans even fought together.

So, May 9, 1945, Major General Bentak signed a capitulation in the Greek city of Heraklion. German troops surrendered to the British 28 Infantry Brigade of General Preston. Until May 11, the Germans waited in vain for the British occupying forces to come to capture them. But the British were detained heavy fighting with "Elas" (Greek communists). London organized a punitive operation in Greece to prevent the communists from coming to power. And the Germans helped them in this.

In August 1944, a group of German military meteorologists under the command of professor of geography and experienced polar explorer Wilhelm Dege was sent to the island of Nordostland, which lay to the northeast of Spitsbergen. The submarine U-307 and the motor ship “Karl Bush” delivered 11 people and 1800 boxes to the place with all the necessary equipment for the station to operate. Of the eleven, eight had military ranks. Weather Station was supposed to serve the aviation and navy of Germany.

In late April, radio contact with the mainland ceased. Wilhelm Dege learned about Germany's surrender on May 12 1945 from a Norwegian radio program. At the end of May, he was able to contact the British, stationed in the Norwegian port town of Tromso, and request assistance. The British promised to remove the group from the island, after which there was silence on the air, which continued throughout the summer of 1945. August 30 from the British received a message: "September 3 will take you ship Blaazel."

The British sent one officer and two soldiers to Nordostland, as well as a Norwegian geographer Ludwig Alberts. On September 4, a professor and concurrently Major of the German Army Dege wrote on a paper filed to him by an English officer: "We surrender unconditionally." Part folded up weapon the garrison: one pistol, one machine gun and nine rifles, and all the materials of the expedition, diaries and films were buried on the island, where his son, also a scientist, found them thirty years later. Thus, the station's garrison was the last of the units of the Wehrmacht, who laid down arms in that war. And not only in Europe - the surrender of this part occurred already after the surrender of Japan.