Crimea came, and Kaliningrad is leaving? Why did our Baltic Pomerania suddenly engulf the Königsberg region 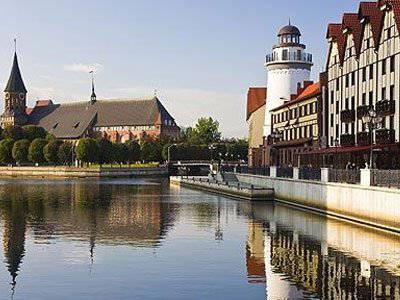 Today, pro-German views are being imposed on Kaliningraders everywhere against the background of Russophobia gaining strength. Examples - darkness. Only external - the Berlin car workshop on Moscow Avenue (bye), the Frau Elsa store, wandering from one place of the city to another, ubiquitous photographs of the old German city: at stops, in offices of businessmen, in office buildings ... That's all it means?
Kaliningrad region in the national relation is a typical Russian region, there is a great majority of Russians in it, why is this happening?


A characteristic publication appeared on the German Internet under the eloquent headline “Konigsberg instead of Kaliningrad” and aroused the great interest of the German reader. By the way, the editors of the German site subtitled the article "Back to German roots." The following is reported about one event, held in Kaliningrad in November last year. On that day, the Day of National Unity was celebrated throughout Russia, which became a holiday in honor of the liberation of Moscow from the Polish invaders in November 1612. Our separatists held their march, which was dominated by German flags, including the German province of East Prussia, which exists only in their imagination, but it is very strong. And in the photos from the procession it was indicated that they were made “in Germany”, although we are talking about our city.

A German observer called this event a “Prussian-Russian parade”, which indicates the emergence of a layer, as he writes, of “German-Russian” citizens (die Deutsch-Russen), from which all German patriots should take an example. The transparent hint is as follows: like the new Prussians of Kaliningrad, who corroded Russianism in themselves, the Germans of Germany must also put an end to Americanism and "European Unionism." The Germans, not hiding, rejoice in the gradual decrease in their own national dignity among the Russian youth of Kaliningrad. Let's be honest - German delights have a reason.

The author further emphasizes that more and more young people of our region are related "to German history region ", parting" with the Soviet myths.

The subtext is obvious. Very many people in Germany want us to forget that Germany attacked our country in 1941 was directly responsible for the death of 27 by millions of Soviet citizens, mostly civilians.

It is this truth, as well as the well-known information about the Nazi atrocities that the Germans and their allies, like the Galician Bandera, committed on our land, are now called “Soviet myths”. German author admires the abundance of inscriptions "Konigsberg", pleased with the resurgent "German cultural landscape."

The Russian society of Kaliningrad, by the way, protested against the pro-German styling of buildings under construction, which was conceived and carried out by the former chief architect of the city. What happened was exactly what the Russian cultural figures warned about. In the middle of 2000-x, when this architectural kitsch was conceived, it was said about its inadmissibility, since this is not Germany, we have our own architectural styles and sympathies, and the idiotic imitation of the Germans is contrary to us. Our pro-Western leaders were warned that in Germany these projects would be perceived as a betrayal of Russian culture. So it happened. The separatists, by the way, held their November demonstration in this, as it were, German part of the city.

Then the author summarizes: “In any case, among the youth of the city, we are no longer talking about Kaliningrad, but always - about Konigsberg ...”. Of course, there is more of what is desired here, and we have every reason to recall Dostoevsky with his assessments of the German character, somewhat inclined to boast.

However, it is also true that the journalist, though he exaggerated the scale of separatism, was not mistaken in stating its existence. He believes in the possibility of holding a vote this year on the issue of “returning the city to the name of Königsberg”.

He also anticipates the further course of events arising from the long-running process of Germanization of the Kaliningrad region. It refers to the words of one of the main local separatists, a regular participant of the German-patriotic, and in our opinion, revanchist congresses, which are regularly held in Germany. This person with the Russian surname, having unfolded the German-Prussian banner, declares: “It goes without saying that Prussia is here, and not some Kaliningrad region”.

Further, we are talking about the movement led by this leader, who for a number of years has "put forward clear political demands": the achievement of "considerable autonomy from Moscow"; creating a legal and other base for the “return” of “descendants of expelled Germans”, “renaming cities, villages, streets in accordance with their original German names”, starting with the “main impulse” of the whole process - the return of the city name Königsberg. A German activist with a Russian surname adds that today "the existence of a city named Kaliningrad is a complete disgrace."

I hope, reader, it has now become clear what the German observer was referring to when he was deaf, but joyfully writing, that separatism embraced “various spheres” of Kaliningrad life? By the way, he got to the point, stating that local politicians, in fact, do not interfere with the separatist mobilization of public opinion.

The conclusion is unequivocal. The events in Ukraine clearly showed what is happening with the people, who for a long time purposefully separated from their true Russian name, spirituality and customs. In Kaliningrad, the same excommunication of young people from the Russian world takes place. The consequences can be tragic if we continue to behave as if “there is no problem”.

Ctrl Enter
Noticed oshЫbku Highlight text and press. Ctrl + Enter
We are
What you didn't want to know about EnglandList of destroyed the largest and most high-tech enterprises
Military Reviewin Yandex News
Military Reviewin Google News
207 comments
Information
Dear reader, to leave comments on the publication, you must sign in.