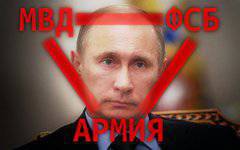 The latest personnel changes are designed to create a new balance between the Interior Ministry, the army and the FSB.

The Commander-in-Chief of the Interior Troops of the Ministry of Internal Affairs of the Russian Federation Nikolay Rogozhkin has been appointed the plenipotentiary representative of the Russian President in the Siberian Federal District. Lieutenant-General Sergey Melikov, commander of the Joint Group of the Internal Troops of the Ministry of Internal Affairs in the Caucasus, became the Presidential Plenipotentiary in the North Caucasus Military District.

At the same time, a ministry for the affairs of the North Caucasus was established. He was headed by the governor of the Krasnoyarsk Territory Lev Kuznetsov. And about. Viktor Tolokonsky, former presidential envoy to the Siberian Federal District, was appointed instead of the governor.

Here is such a personnel carousel.

It turns out that there was a sharp hardware weakening of Alexander Khloponin. He served as presidential envoy in the North Caucasus and deputy prime minister. Now he left only the post of Deputy Dmitry Medvedev.

Few have paid attention to an important hardware circumstance. Putin instantly dismissed Khloponin as a member of the Security Council. This post is usually attached to the plenipotentiary status. But Tolokonsky has so far maintained membership in the Security Council. Thus, Khloponin was severely curtailed in his rights, although, as reported, he will be in charge of the new ministry in the North Caucasus.

The main meaning of the current permutations is to strengthen the Ministry of Internal Affairs, whose representatives were immediately on the two most important plenipotentiary posts. But at the same time the strengthening of the Federal Guard Service, coming from which occupied important positions in the system of the Ministry of Internal Affairs and beyond its borders, also occurs.

Viktor Zolotov became the Commander-in-Chief of the Internal Troops of the Ministry of Internal Affairs of the Russian Federation with the rank of First Deputy Minister. Previously, he served as Chief of the Presidential Security Services (2000-2013) with the rank of FSO Deputy Director. In 2013, he was transferred to the post of Deputy Commander-in-Chief of the Internal Troops of the MVD. Then there were rumors that he was prepared for the post of commander in chief. As you can see, the rumors were justified.

It should be borne in mind that the Internal Troops are the “second army”. The position of commander in chief is extremely influential. Moreover, as a person who has personal access to Putin, Zolotov should have a large degree of hardware autonomy.

After all, the Presidential Security Service is a structure directly responsible for protecting the head of state. There was a relationship of trust between its leader and the first person of the country.

Former business manager Vladimir Kozhin has been moved to the position of presidential aide for military technical cooperation. Formally, this is a fall, as the Office of the President’s Affairs is a huge holding company controlling significant assets. Its founder is considered to be the legendary Pavel Borodin, a long-term “manager” under Yeltsin. Naturally, the manager has almost unlimited financial possibilities, and political autonomy due to its proximity to the head of state is great. So formally Kozhin weakened.

Another thing is if Putin wants to appoint him to some significant post, and the post of assistant here is just a “transfer station”. Let me remind you that Elvira Nabiullina, after being an assistant, became the chairman of the Central Bank, and Tatyana Golikova became the chairman of the Accounts Chamber. Then, perhaps, the current personnel decision will be happy for Kozhin. But so far this is not the case, since the power of an assistant very much depends on the favor of the head of state.

It seems that Vladimir Putin decided to strengthen federal power by people from his personal environment. After all, the employees of the Presidential Security Service, by the nature of their duties, are in very close contact with the head of state.