How to make the fear of the DPRK rational 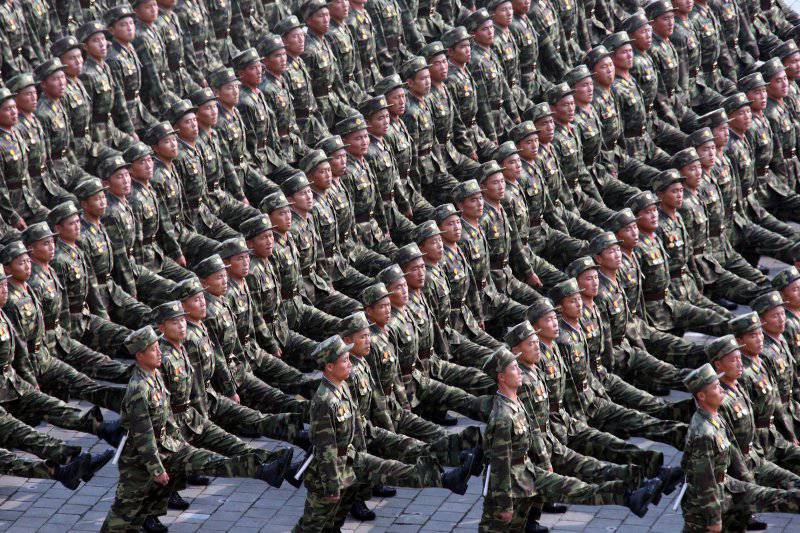 While the attention of the world community is focused on events in Ukraine, passions in other parts of the world do not subside. For example, a diplomatic scandal broke out on the Korean Peninsula the other day: two Koreas quarreled again. So far, fortunately, without shooting. But both Southerners and Northerners love to back up their words with actions, so the situation remains quite explosive.

North Korea should cease to exist - this was stated by the South Korean Ministry of Defense. A spokesman for the department, Kim Min-Sook, severely criticized the North Korean system of government, and accused the DPRK leader Kim Jong-un that everything inside the country exists solely to meet his personal needs. In such circumstances, there is no need to talk about human rights - the South Korean official ended his speech with such a thesis.

The words of Kim Min-Suk were a response to insults against South Korean President Park Geun-hye, who was called a “political prostitute” at the North Korean Foreign Ministry on the occasion of the introduction of regular sanctions against North Korea. To be honest, North Korean officials gave a succinct description of the leader of a neighboring state, but unacceptable from the point of view of diplomacy. After all, Park Geun-hye trades in his country, effectively surrendering it to the United States. By the way, the president of the United States in the DPRK was called the "evil monkey", which, in general, is also close to the truth, although it sounds rude.

All parties involved in the scandal, have traditionally managed to “express outrage” by the actions of opponents. In general, an ordinary case: such diplomatic demarches happen very often. More than the United States, Japan and South Korea have to worry in cases where the DPRK conducts missile tests or carries out underground nuclear explosions: then the defense departments of these countries are on high alert, waiting for some kind of trick. But in North Korea, they are aware of the risks, and are limited to a demonstration of power.

Formally, the DPRK and the Republic of Korea are still in a state of war. Tensions between these countries persist since the days of the Korean War. The recent aggravation of the situation is not an exception: the warring states periodically enter into diplomatic and military clashes with each other for the past 60 years. Since the end of the Korean War, thousands of people have died in minor border incidents on both sides. Suffice it to recall, for example, the 1966-1969 crisis in the demilitarized zone, the attempted assassination of South Korean President Pak Jong Hee in 1968, or the Rangoon 1983 bombing of the year — another attempt to kill the leader of the Republic of Korea, this time Jong Doo Hwan.

New difficulties in relations between Pyongyang and Seoul arose when the DPRK became close to possessing nuclear weapons. After the first nuclear tests were carried out in North Korea, the country was subjected to sanctions by the UN Security Council. The resolution adopted by the Security Council allows for the inspection of aircraft and ships bound for the DPRK to freeze banking transactions and accounts of legal entities and individuals from North Korea.

As part of the sanctions, unprecedented measures were taken, such as allowing North Korean diplomats to be searched for large sums of money for the development of a nuclear missile program. This is a direct violation of diplomatic immunity, which goes against all world standards. But is Washington interested in this? Unfortunately, the right of force has not been canceled.

How to justify cruelty

Despite the fact that a hostile neighbor with nuclear weapons makes the guard, Japan and South Korea derive their benefits from the existence of the DPRK. First of all, we are talking about the rapid militarization of these states, especially Japan: in Tokyo, they are seriously discussing the possibility of turning the Self-Defense Forces into a full-fledged army that will be ready to carry out military operations both inside and outside the country. Of course, this new army can be used by Japan against Russia and China as part of the struggle for control of the Pacific Islands.

In South Korea, the armed forces also receive good funding, and the generals are full and satisfied. It is worth noting that the transition of the Republic of Korea to a democratic form of government took place only at the end of the 80s: before that, the country was headed by a junta, which, thanks to horror stories about the threat from the DPRK, was able to hold on to power for about a quarter of a century. The first president of the republic was a tough autocrat and anti-communist, so at first the situation in both Koreas was similar, except that supporters of capitalism were persecuted in the North, and supporters of communism in the South.

By the way, on the fight against imaginary enemies: the ongoing conflict of the DPRK and the Republic of Korea contributes to the mobilization of the inhabitants of the South. The authorities are actively using this, and under the pretext of “saving democracy” they can act contrary to the wishes of the majority of voters. Say, if you, our compatriots, will not tolerate our whims, our country will become weaker and will be conquered by northerners. And although the “hot” war between the two Koreas now seems fiction, this mechanism of voluntary coercion works without failures. No wonder the Koreans suffered a long-term military dictatorship!

As for the USA, the existence of the DPRK is also beneficial for Washington. Under the pretext of confrontation with North Korea in the region of Japan and the Yellow Sea concentrated an impressive group of American armed forces. It is not difficult to guess that it acts as a deterrent not so much for the DPRK as for continental China. With all the desire, the North Korean missiles will not reach the shores of America, while the PRC is able to incinerate several American cities. Therefore, the real threat to the United States is China, and North Korea acts only as a cover for the aggressive policies of Washington.

In this regard, the problem of North Korea was noticed only after Pyongyang mastered nuclear weapons and became a real threat to Japan and South Korea. Only then did they sound the alarm in Seoul and Tokyo, but this did not help much: the United States remained outside the seat of tension, and imposed the same ineffective sanctions as on Russia. In Washington, they quite seriously stated that from now on the residents of North Korea would not be able to buy ... yachts and race cars abroad. Just think, the irreparable damage to the North Korean economy! How to live in the DPRK without a Formula 1 car?

It can be summarized: until the “zero” years, North Korea was a profitable horror story for Japan, South Korea and the USA. After the DPRK acquired nuclear weapons, the threat from her was real, not ghostly, and this was taken into account in Seoul and Tokyo, but not in Washington. The United States doesn’t take North Korea seriously, and under the “fight against dictatorship” brand they flood East Asia with their own troops. To then come to grips with China.