E.Holmogorov: “The conversation with the invaders should be short” 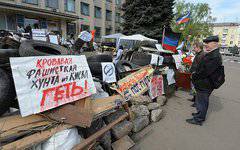 Until the troops are withdrawn, the dialogue with the Kiev junta should be limited only to the exchange of prisoners


Imagine a picture. In the same room are the torturer, the victim and the judge, the purpose of the meeting - the reconciliation of the parties. At the same time, both the judge and the torturer knowingly assume that the victim agrees in principle with this approach of the question, the whole point is only in the details. And the victim, meanwhile, needs only one thing - for the judge to use the power and write out a ticket for the criminal on the criminal.

This is just about the current tragicomic triangle with the participation of "unofficially-official" Kiev, the Southeast and the collective West, which, of course, is fighting for world peace and cannot calmly look at the blood of innocent people shed east of Kiev. It reacts, however, in a peculiar way - it strengthens sanctions against Russian officials and for some reason does not touch Kiev officials, although it would be very logical to do this after the “Odessa Khatyn”, which is very difficult to blame on Russia, although the Ukrainian agitprop is trying very hard to do it.

Should we expect any progress from the new European peacekeeping movement, which delegated diplomat Wolfgang Ischinger to Kiev as an OSCE mediator in Ukraine? This is probably a rhetorical question, since the terms of negotiations expressed by the leaders of Donbass (to stop the ATO and recognize the status quo at last) are completely ignored by Kiev, and Brussels somehow does not insist on respecting the nation’s right to self-determination. So, there will be a lot of talk, fascinating, interesting ... but again everything is not about that, in the process of fearing the "shabby" Russians with every imaginable and unthinkable punishment. Probably, they are so calmer.

And does it make any sense to pay attention to this immense political vulgarity? ..

Well-known political scientist and publicist, editor-in-chief of the Internet publications Russian Observer and Novye Chronicles, Yegor Kholmogorov, noted the futility of current Western attempts to organize a “peaceful dialogue” between Kiev and the Donbas:

- The method of dialogue that the junta chose for the Southeast is well known enough: attacks on civilians and cruel reprisals. Accordingly, no real dialogue is possible until the cessation of these punitive attacks, until such time as the Kiev troops are withdrawn at least from the territories of the self-determined Donetsk and Lugansk republics.

Until that happens, there’s nothing to talk about with them. The conversation with the invaders should now be short: withdraw your troops from the territories of the republics that were self-determined as a result of the referendum - we continue to talk further. In the meantime, the junta not only does not intend to do this, but also declares directly through its leaders that it does not intend to stop its “anti-terrorist operation”. So, meanwhile, it makes sense to limit all negotiations to the subject of the exchange of prisoners.

But the problem is also in the fact that so far a sane political subject, with whom it would be possible to carry on a dialogue, does not exist in Kiev, and so far there are no signs that he will appear.

By the way, I would not say that the West is taking such active steps to compel Kiev to dialogue. If Washington and Brussels really had such a desire, they would have forced Kiev to talk to Moscow long ago. They just want to somehow imitate some kind of activity, show their indifference to the affairs of Ukraine ... but, in fact, what can we talk about here, if no one can guarantee that events like Mariupol and Odessa will not happen again ? If the possibility of repeating all this is technically excluded, then all these aspirations of the West will have at least some meaning.

- Perhaps such activity is dictated including the upcoming elections of 25 in May? How likely is it that in the end we recognize their results?

- Honestly, I am genuinely surprised when some of our statesmen, like State Duma Speaker Sergei Naryshkin, talk about the possibility of recognizing the election of the 25 number. In my opinion, this option should be absolutely excluded, since it is all the more important now for us to remain firm before launching the constitutional process in Ukraine and insist that legitimate elections are possible only under the conditions of a working Constitution.

And, roughly speaking, elected President 25 May Russia should recognize the maximum only as a temporary technical president for the transitional period if he himself declares and organizes work on the creation of a new Constitution and - after its adoption - organizing legitimate presidential elections. But Mr. Poroshenko - the man who is currently the favorite of the upcoming "elections" - clearly will not agree to be temporary: he clearly plans to pretend to be the president of Ukraine over the next four years.

Ctrl Enter
Noticed oshЫbku Highlight text and press. Ctrl + Enter
We are
A great interview with Sergey Lavrov: about Ukraine, Obama and IranInterview by President Bashar Al-Assad to the Sunday Times
Military Reviewin Yandex News
Military Reviewin Google News
14 comments
Information
Dear reader, to leave comments on the publication, you must sign in.