16 May 2014
113
In Ukraine, the election debates started the other day: a sort of bride at the post of the main “plague” in a state that is crumbling before everyone's eyes. At first glance, everything is as it should be: strict suits, ties, polished shoes to shine, female candidates - with makeup and hairstyles - a political show on the precepts of the “great” West. But with a more serious acquaintance with the "debating", the thought arises that this is not a debate, but, excuse me, the "Ship of Fools" by Hieronymus Bosch. And there is a complete feeling that the ship in full sail rushes to the rocks.


The selection of candidates is such that the debate turns into a real circus "on the water". It’s no joke to say: in these political and pseudo-political figures, the country is crumbling underfoot, a few hundred kilometers from a beautiful and brightly lit studio, some Ukrainians kill other Ukrainians, the economy rushes to hell, the hatred of the people rolls over, and they “powder their noses” in the makeup rooms and going out under the lights of the spotlights, they argue about how wonderful presidents will be ... 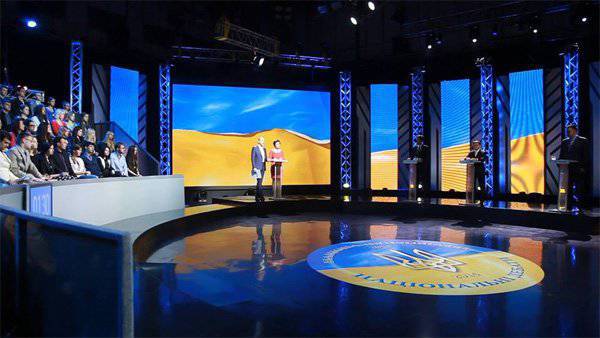 You only elect me, says one of the candidates, and I will provide the monthly income of citizens, at least in 1000 US dollars. This is at the value of nominal GDP per capita of Ukraine according to the IMF estimates of less than 4000 dollars per year. Of course, such promises for a country that sleeps and sees another credit tranche from Western benefactors, in order to pay off at least some of the old debts, can be looked upon as new Ukrainian humoresques. And it would be better not to look at such a candidate at all - even the last name should not be remembered, since he himself doesn’t know what he is carrying ...

But it is impossible not to remember the name of another candidate, because this is our common “friend” and, God forgive me, “brother” Petro Poroshenko, who has a revolutionary chocolate flavor that clearly gives no peace. The candy king promises a sweet life to Ukraine, without specifying that it will remain of Ukraine by the time this very sweet life begins. If he means the limits of his apartments, then one must think that a bright future in this separately taken part of Ukraine has already come ...

Another thing is interesting: when exactly the competent authorities will be engaged in the origin of this “bright future”, and when the Ukrainians themselves realize that Yanukovych’s change to Poroshenko, and at the same time, Viktor Yanukovych’s family change to Joseph Biden’s family (Biden’s son shows a remarkable interest in the Ukrainian energy system with the active support of Poroshenko) - hardly what they dreamed of.

By the way, Petro Poroshenko during the debates is not at all as sweet as many people think. The main reason is that, speaking to the public, Petr Alekseevich is compelled to reflect on how he now can return the money that was “withheld” by the Russian side for “moral damage”. We are talking about the decision of the Tver Court of Moscow, according to which Mr. Poroshenko’s accounts in Russian financial institutions of 15 million dollars and 2 billion rubles, respectively, were arrested. Representatives of Porhenkovsky Roshen'a filed an appeal, but the court decision was not changed, and now Peter Alekseevich will have to “recruit” either Mr. Biden, or, at worst, some Nuland in order to compensate for the losses for the position that the West has directed for candy King of All Ukraine.

Yesterday's caretaker Yulia Tymoshenko, who, after several attempts to finally resolve the issue with the Ukrainian economy, cherishes the hope of resolving this issue already in the status of president, is also ready to “debate” before the stars. And this is despite the fact that 8,8% of Ukrainian voters are ready to vote for Yulia today (the results of a sociological poll from the GFC “Ukraine”) ... Still, it’s better than that of Tyagnibok, who seems to have finally fallen into marasmus about setting barriers for all languages in Ukraine, with the exception of Ukrainian, and no other “presidential” ideas are able to voice. The leader of "Freedom" rating today is 1,3%.

So, Yulia Tymoshenko continues to rape the brain of Ukrainian citizens with reflections on the fact that she and she will solve all Ukrainian problems until the return of the Crimea ... There will be, they say, gas at cheap prices, and European prosperity, and NATO partners peacefully plowing expanses of the Black Sea defending the frontiers of Ukraine from "moskalskih" attacks. In general, 8,8% of Ukrainians still believe in this crap, although a much larger number of non-square citizens either make fun of “Mrs. 2011-2014”, or even frankly declare that they are sick of a lady with a scythe.

One of those present at the Kharkov rally of Yulia Tymoshenko, speaking after the apparently thin applause, raised the mini-slogan "Kachanovsky colony is waiting for you!"

Julia pretended not to notice ... And the majority of not only Kharkiv citizens, but also Ukrainians in general no longer notice Yulya herself. It seems to be there, but it seems to be no longer there. Everyone (except 8,8%) understands, and Yulia doesn’t understand that she has worked out material for the West, and it’s too late to seek support from Russia after her numerous tirades about “atomic shooting” and “scorched earth”.

But from the folklore of the candidate Tymoshenko from social networks.

It was the third year of the Tymoshenko presidency ... Spring ...

Started to eat pigeons. They are tasty and healthy. The bark of the tree is suitable as a condiment and brewing tea.
On the day of birth they stabbed the cur. On the balcony lying upside down salted sparrows.
The air in the city becomes cleaner, rare cars surprise kids.

We are looking forward to summer ... There are no cockroaches at home ... The last one was eaten back in September of 2015 ... The mosquitoes are afraid to fly in to us, our veins suck them through their proboscis! Migratory birds fly over my city only at the height of 12 000 meters, they are afraid below ... people jump! Toads spring croak only sitting deep under water! The rats are gone from the city forever! Today I boiled my shoelaces for the first time; if they follow salt, they look like spaghetti.